In the Czech Republic, what is known as “alternative” news has become a successful industry, supported by the public’s low trust in traditional media.

While journalists and media experts in the country cautioned that clear distinctions must be made among false content, opinionated stories, clickbait and propaganda, they agreed that the situation had become more difficult for fact-based journalism. Key factors include dissatisfaction with the country’s politics, public debate surrounding refugees and a wide array of disinformation originating from sources linked to Russia.

Notably, the discussion around concepts like “disinformation” and “fake news” in recent years even prompted action from the Czech government. In early 2017, the Ministry of Interior launched the Centre for Combating Terrorism and Hybrid Threats, whose primary aim is to dispel information that threatens national security.

In interviews with the International Press Institute (IPI), Czech Republic-based journalists said that applying the term “fake news” to the country’s media landscape was not a straightforward task, with “alternative” media outlets producing content that could be variously described as dishonest, deceptive or sensationalist.

Benjamin Cunningham, a Prague-based journalist covering Central Europe for The Economist, commented that there was a “pretty strong tradition of semi-fake, tabloid, clickbait journalism, which is sort of merged with the fake news element”.

Tomáš Brolik, a journalist with the weekly news magazine Respekt, added that several outlets simply produce bad journalism. These sites, he said, could not be defined purely as “fake” but occupied a kind of “grey zone”.

One of the most prominent “alternative” sites in the Czech Republic is Parlamentní listy, whose sensationalist, Breitbart-style reporting brings in some 600,000 monthly readers, an impressive number for a country of only 10 million.

“In many of their stories, the core is true, but the reporting is not precise,” Brolik said of Parlamentní listy, which has a staffed, bricks-and-mortar office in Prague. “So it’s close to the likes of Daily Mail in some sense. It’s simple reading, full of emotions, conflict: something that normal media would not print.”

While alternative media has become a good business thanks to high readership and advertising revenues, some have pointed out that there could be other motivations besides money, such as Russian interest in disrupting Czech society and political discourse.

In 2016, a survey found some 40 websites in the Czech Republic that regularly published pro-Russian narratives. The same year, the country’s counterintelligence officials warned that Russia was disseminating disinformation to “weaken the strength of the Czech media” and promote “inter-societal and inter-political tensions”.

In addition to deceptive and opinionated news sites, Brolik said, there are some that are “purely fake”, like the pro-Russian Aeronet.

“Its reporting is masquerading as news. The content is often similar to what you see in the Russian state media as well,” Brolik said.

Cunningham said that Parlamentní listy, which hold a mass audience, also “has a lot of content that points to Russia”.

Besides the Czech-language service of Russian-state-sponsored Sputnik News, however, it is not easy to determine whether “alternative” media outlets actually have links to the Kremlin.

“Some more amateurish sites are happy to use pro-Russian, conspiracy theory type stuff provided by Russia,” Cunningham said. “It is hard to say whether this is coordinated or just pragmatic to get more traffic to the sites.”

Although pro-Russian narratives, conspiratorial and highly skewed content are common, experts told IPI that most of the disinformation in the Czech Republic is not directed against domestic political parties as such.

Brolik said he did not observe any major attempts to influence the outcome of parliamentary elections held in late October 2017.

“If there was fake news that attempted to attack specific politicians, it was not effective,” he said. The themes were instead much broader: “The content we saw was, as usual, anti-establishment, anti-Washington, anti-Brussels, anti-immigration.”

Brolik said that if there was a political party that would benefit from “fake news” narratives, it would be the Freedom and Direct Democracy (SPD) party headed by Tomio Okamura, whose campaign was “pretty much based on fake news”.

Dissatisfaction with the current state of democracy and globalisation, as well as anti-immigration sentiment, seemed to be the driving forces of many alternative news outlets in the country and fit well with the views of SPD supporters.

Michal Musil, an editor with Reporter, a monthly news magazine, told IPI that plenty of dubious stories were spread via social media by those likely to vote for SPD, as well as by possible “bots” and “non-Czech citizens”.

Those stores, Musil said, contain “stances similar to views spread by Russia-connected trolls in the US or UK: never anti-Putin, always anti-Muslim, anti-migration and anti-EU”.

Cunningham said that while disinformation or “fake news” might not have been a real issue in the last election, the January 2018 presidential vote looked poised to be different, largely due to the re-election campaign of current President Miloš Zeman,

“Zeman has a dubious relationship with Parlamentní listy, he’s quite pro-Russian, lacks subtlety and is not worried about employing dirty tactics,” he said. 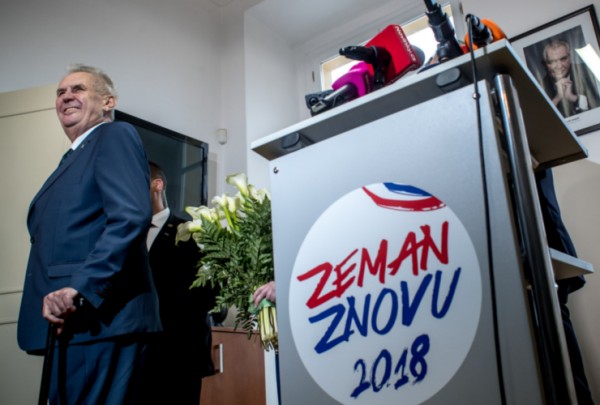 The official reaction to the perceived threat of Russian disinformation, the highly publicised Centre for Combating Terrorism and Hybrid Threats, has yet to impress observers.

Musil said that the Centre has been fairly silent, apart from infrequent social media postings.

But, he added, “its sole existence has sparked a discussion and may have led to greater awareness of the ‘fake news’ phenomenon among some segments of society.”

Brolik said that he did not think the initiative had enough resources or power to make a big difference.

“And if it did, I would be worried because it’s a state agency. I don’t think it could work in any case, because most examples of fake news are anti-government and setting up a government agency against them would make matters worse.”

There have also been a number of independent attempts to thwart disinformation in the country. Several news sites and online platforms that work to debunk false stories, such as Hlídacípes.org, Hoax.cz, Demagog.cz and Manipulátoři.cz, list websites that have taken part in spreading hoaxes and false reports.

In 2016, the Twitter group Sleeping Giants, which identifies and alerts companies whose advertisements appear on known disinformation sites. These efforts have had some success: In 2017, for example, Vodafone, one of the largest mobile phone operators in the Czech Republic, vowed to block its ads from appearing on sites promoting hate speech or disinformation.

Still, countering the impact of “alternative” news outlets that engage in disseminating false information, expert say, will require acknowledging the trust deficit in mainstream media that has allowed such outlets to flourish in the first place.

“In the Czech Republic, no one has a monopoly on setting narratives,” Cunningham said, though he noted that the decline in trust did not seem as rapid as in the United States, for example. “The general perception of media is a little negative here and there is some confusion as to who is telling the truth.”

But, he added, due to increased coverage in the media and greater public discourse on disinformation, “more people know now where to draw the line between purely fake news, conspiratorial content, opinions and skewed reporting.”

According to Brolik, many readers “do not see the real difference between alternative outlets and professional journalism”.

“We have to explain our work as journalists better,” he said. “The best way that we can react to fake news is to continue our work as before, to continue producing high-quality journalism.”