People in Prague attend an event organised by the group Hate Free Culture called “Lunch at the Mosque”, which brought together around 400 people of different religious and non-religious backgrounds. Photo courtesy Hate Free Culture.

In recent years the Czech Republic has seen the launch of a number of official and private initiatives aimed at counteracting the spread of disinformation or “fake news”.

One of the first efforts to systematically debunk false information was Hate Free Culture, which was founded amid the refugee crisis of 2015.

Hate Free Culture is the media wing of Hate Free, which initially began as a government-funded initiative to combat hate speech against the Czech Republic’s Roma population. Thanks to additional funding from the Norway Grants, Hate Free has worked for several years to tackle xenophobia by providing education in schools, training police on how to deal with hate crimes, and consulting with local officials.

Lukáš Houdek, the project coordinator in charge of Hate Free Culture, told IPI that the initiative grew into a hoax-debunking website out of necessity.

Originally, Houdek explained, “the government wanted to do a more traditional campaign of billboards and TV spots, but we wanted to try something experimental. We wanted to communicate with people directly and on a daily basis, to be a platform for discussion.”

Hate Free Culture was thus founded as a platform containing articles, interviews and social media content that aimed to educate the public on how to discuss sensitive issues with respect.

In 2015, the site’s operators watched as anti-Muslim sentiment in Europe grew in the wake of the terror attack on Charlie Hebdo and the onset of the refugee crisis, leading the project to broaden its original mandate. And with the sharing of false information acting as a motor of hate, the site adopted the debunking of hoaxes as an efficient tool in its wide range of media activities.

“There were so many hoaxes and untrue stories targeting refugees and no one was addressing them strategically,” Houdek said. “So we told the public they can send us stories and we’ll check if they are true.”

Since the start of the refugee crisis, Hate Free Culture has debunked some 150 stories, the vast majority in 2016. In 2017, the site debunked only around 30 hoaxes.

Houdek attributes this figure to a decrease in disinformation aimed at minorities since Hate Free Culture started, which he believes in turn to be the result of many successful fact-checking initiatives in the Czech Republic.

“When we debunk a hoax, it just stops spreading,” he said. “So even though the reach of a hoax is certainly bigger than our reach, we can stop it.”

According to Houdek, Czech readers have learned to be more critical about the sources from which they obtain information. If they see that a certain source has had many of its stories debunked, they will treat that source with greater caution.

He added that discussions around hoaxes and disinformation have become more prevalent in the country, with media education now being provided in schools and the government’s showing real interest in the subject with the founding of the Centre for Combating Terrorism and Hybrid Threats. 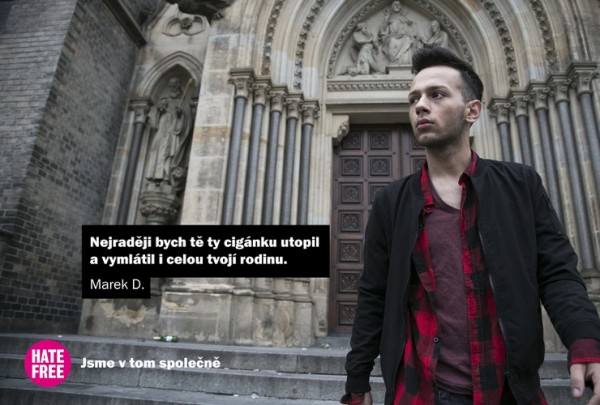 Roma singer Jan Bendig is seen in a poster from Hate Free Culture’s Jsme v tom společně (We are in it together) campaign on hate speech. The campaign produced a series of 40 posters of Czech people showing messages and comments they had received.

Still, Hate Free Culture faces an uncertain future, in part because of its status as a government-funded project.

“Not all politicians like what we do,” Houdek noted. “Human rights, hate speech and hate crime are sensitive topics that many politicians don’t want to touch. Here, promoting human rights can mean political suicide.”

He pointed out that employing rhetoric against minorities, human rights and NGOs could even provide politicians a boost in the polls.

The project’s public image – which Houdek said changed during the refugee crisis – is an additional factor prompting concern about its future existence.

“We have this label of a left-wing project that welcomes refugees and promotes Islamisation,” he said. “Which is ridiculous, since we are a government project and we only deal with facts.”