The “fake news” phenomenon and the accompanying discussion about its definition, sources and goals have become increasingly common in Finland over the past two years, but journalists and media experts say that a self-regulating media landscape and a reasonably high degree of public trust in the country’s media have provided much-needed resistance to negative effects.

In Finland, the most prominent incidents of discourse involving “fake news” have generally been infused with anti-immigration and far-right hate speech, as well as content originating from Russia or with possible ties to suspected Russian government-organised disinformation campaigns.

Nevertheless, in interviews with the International Press Institute (IPI), those journalists and media experts generally said that they did not believe that the “fake news phenomenon” had reached quite the same scale in terms of impact in Finland that it has internationally, although they agreed that the issue was widely noted in the media and in public discourse.

Juha Rekola, the international ombudsman of the Union of Journalists in Finland (UJF), told IPI that the Finnish public is targeted with content similar to that appearing in other countries, from content produced by the “alt-right” movement in the United States, to that originating from Russian propaganda machinery

“Behind fake news, we see a lot of Russia, anti-immigration groups, far-right groups,” he said. “Neo-Nazis in Finland produce a lot of content.”

Pointing to other domestic sources, Rekola mentioned by name what is possibly the best-known “alternative” online media outlet in Finland: MV Lehti, which has been investigated for a range of alleged offences, from defamation to copyright infringement.

He emphasised, however, that making a clear distinction between hate speech and “fake news” articles published in online alternative media outlets is difficult, as the stories seem to meld when they spread in social media. Some rumours, for example on alleged crimes committed by immigrants, become “news stories” published by the likes of MV Lehti, and some of these news stories further transform into hate speech on social media.

Obvious political goals include normalising xenophobic, anti-immigrant and racist rhetoric, he said. More abstract goals include, according to Rekola: “eroding trust in the mainstream media, in Finnish society, and in democracy and political decision-making as a whole”. 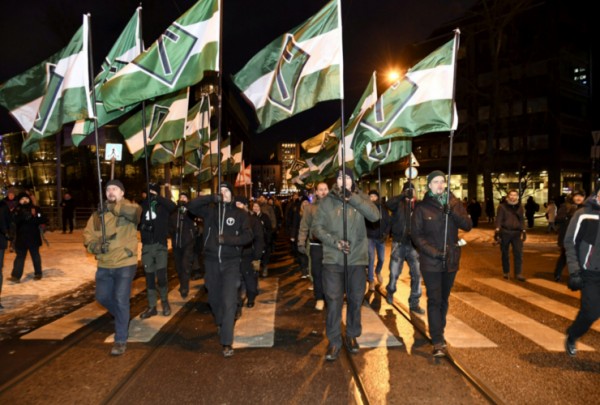 Members of far right group Nordic Resistance Movement march during the festivities of the centenary of Finnish independence in Helsinki, Finland on December 6, 2017. LEHTIKUVA / Markku Ulander / via REUTERS

Elina Grundström, the chairperson of the Finnish Council of Mass Media (CMM), which oversees good journalistic practices in member media outlets, also highlighted ideological reasons behind the spread of “fake news” in recent years. She told IPI that there is a small-but-vocal group in Finland, with a presence on social media as well as in politics, that calls for freedom of speech but abuses the concept by spreading stories inciting hatred.

“This group of people wants to believe in this content, and consequently they often feel like the traditional media is lying to them,” Grundström said. “Internationally, we have seen some very dire developments, in that people prefer to believe the information that reaffirms their own world view.”

A report on national security threats by the Finnish Interior Ministry in February raised concern about the rise of violent extremism, warning that an increase in hate speech and “fake news” was creating a growing space for radicalism and movements on the extreme ends of the political spectrum.

Recent examples that offer some insight into the spread of “fake news” in Finland include reports that followed, respectively, the shooting of three women on Dec. 4, 2016 in Imatra and a knife attack in Turku on Aug. 19, 2017.

In the first case, Grundström recalled, many stories were circulated online claiming that the victims were of Russian origin and that the attack was motivated by hatred against Russians. Traditional Finnish media outlets did not pick up the reports until later, and then only to note that they were inaccurate.

After the events in Turku, in which a Moroccan national stabbed 10 people, killing five, and which is being investigated as a terrorist crime, some reports in the mainstream media were met with different versions in publications like MV Lehti. One such report attempted to discredit a reporter, leading to her being targeted with online abuse after the leader of the right-wing populist True Finns party, Jussi Halla-aho, shared the report on social media.

Grundström noted that even the mainstream media reported on unverified rumours immediately following the attack in Turku. Many publications, such as the popular tabloid Iltalehti, reported that a group of people had been chasing victims with swords, fanning terrorism fears when the attack actually had only one perpetrator.

Still, the traditional media was quick to rectify those claims, Grundström noted, recalling that media outlets quickly published corrections with at least as much visibility as the original articles.

“In Finland, the traditional media is quite resistant to the spread of fake news due to our strong self-regulatory system,” she said. 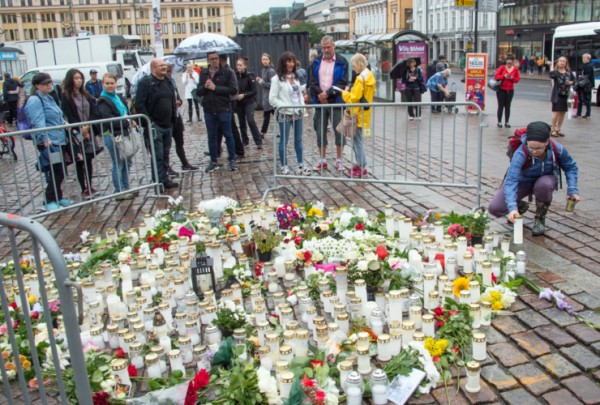 People place candles and flowers on a site of a stabbing at the Market Square in Turku, Finland, 19 August 2017. EPA/MARKKU OJALA

Grundström’s organisation, CMM, is a self-regulating committee established in 1968. It is charged with overseeing good journalistic practices and counts even tabloid and entertainment publications among its members. CMM can issue notices when good professional practice has been breached and the party in violation must publish them.

“Journalists are exceptionally dedicated to upholding agreed-upon journalistic ethics, and this system has prevented the worst effects of the fake news phenomenon,” Grundström said.

Huovinen also noted that while Finland’s small size and unique language make it somewhat easier to notice content out of the ordinary, and while the country’s professional media outlets benefit from a well-educated populace, no one is completely immune to the effects of global information.

“A critical attitude is one of the founding principles of journalism, and if we let that up, we let up protection against fake news and disintegration of trust,” he said.

Rekola agreed that the self-regulatory system, accompanied by high ethical standards shared by publishers and journalists, makes the mainstream media in Finland more immune. He pointed out that, in general, the effect of “fake news” is somewhat curbed by the public’s trust in the media, demonstrated by, among other statistics, high newspaper subscription rates.

In addition, polls commissioned by the Finnish Newspapers Association found that printed newspapers are the most-trusted media product, according to 79 percent of Finns. A 2016 poll by the Association showed that while just over half of all Finns were familiar with alternative, non-journalistic media outlets MV Lehti and Magneettimedia, only eight percent of the group considered these sources to be trustworthy.

Still, there is concern among the major media outlets in Finland that making a distinction between propaganda, malicious fake content and actual researched journalism might prove difficult for part of the public.

The concern led to an exceptional joint statement by the heads of some 20 major media outlets in March 2016. The editors in question expressed concern over hate speech and “fake news” outlets, and affirmed their dedication to good journalistic practices and to protecting their journalists from harassment campaigns and other pressure.

Huovinen told IPI that any discourse that chips away at factual and diverse discussions in a democratic society also harms free speech.

“Fake news and their knock-on effects do just that,” he said “If responsible media outlets take part in facilitating fake news, [the media] loses its trustworthiness and thus, its role as a credible watchdog.”

Both Rekola and Grundström said that the traditional media has done reasonably well in not repeating and thus reinforcing the discourse of “fake news”, and they agreed that the focus should be on the phenomenon itself.

“For example, in the case of crime-related news, where there are many fake reports inciting hatred and violent action against immigrants, it is worthwhile for the media to correct those reports,” Grundström said. “But going against all the disinformation is a lost battle. The media should instead reinforce their own journalistic actions and ethics, and let the public know about it.”

Rekola noted that there have always been lies and propaganda, but he observed that the age of social media simply gives them new tools to operate.

“It is not worth it to stand in shock of purely counterfactual claims and invented stories, because then you end up repeating them,” he said. “It is important to give the whole picture and cover these developments thoroughly.”

While traditional media outlets have carried some of the burden, smaller projects in the journalistic field have also taken steps against disinformation. Examples include Faktabaari, which since 2014 has focused on fact-checking politicians’ statements in the media; the Valheenpaljastaja blog, which deals with “fake news”, facts and stories spread in news and social media; and Huhumylly, a website addressing rumours and fake stories dealing with immigrants that authorities or the media have debunked.

This article forms part of the IPI series “Contending with ‘Fake News’: Notes from the Field”, which examines the particular dynamic around the “fake news” debate in five EU countries: Austria, the Czech Republic, Poland and Spain. It offers a look at the sources, styles and goals of disinformation in each country as well as the extent to which the debate has affected public discourse, politics and press freedom.

The series also includes profiles of five initiatives that have adopted innovative solutions to addressing disinformation and building trust in fact-based journalism. Read our profile of Finland’s Faktana, kiitos! project.