The recent political crisis in Catalonia brought the issue of “fake news” to the forefront in Spain. While the central government has looked for ways to address the spread of disinformation via legislation, journalists concerned about the implications of new laws on freedom of expression have called for a campaign to promote media literacy instead.

Moreover, experts say that while the work of fact-checkers and journalists to combat false information has been commendable, many issues remain, from the media’s inability to build trust to the possible exploitation of the concept of “fake news” by Spanish politicians.

Journalists and media experts in Spain told the International Press Institute (IPI) that the concept of “fake news” reached a new level of publicity in 2017, driven by the sharing of false stories on social media and the increasing efforts of media outlets to debunk hoaxes and misinformation on their websites.

As in many other European countries, in Spain the discussion around “fake news” and misinformation initially seemed to focus on stories involving immigrants and refugees.

Clara Jiménez, co-founder of the website Maldita, which analyses and debunks false news stories, said there were a number of false stories concerning refugees when the outlet started its work in early 2017.

“We soon realised there were other types of misinformation as well,” she said. “In the beginning we had to look for hoaxes to debunk; now, users send stories to us to be fact-checked.”

Still, according to Jiménez, “fake news” was “not a notable concern” in Spain at the site’s outset. Last fall’s political crisis in Catalonia, she said, “changed everything”.

“We used to watch the discussion on fake news on television, especially concerning the United States, and think we were somehow more resistant to it,” she recalled.

In a referendum on Oct. 1, the semi-autonomous region of Catalonia voted for independence, albeit based on a 43 percent voter turnout. The Madrid central government deemed the poll illegal and the day’s events were overshadowed by clashes between voters and Spanish national police.

Discussions heated up in social networks as well, and many observers suggested that false information could have affected the outcome of the vote. 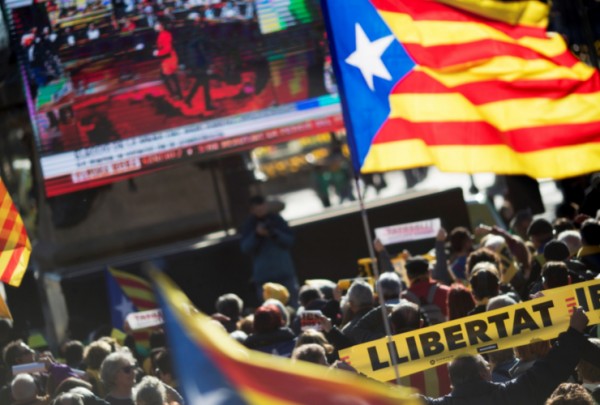 Hundreds of people gather at the park of the Ciudadela in Barcelona, where a giant screen has been placed for people to watch the constituent session of the Catalan Parliament, in Barcelona, Jan. 17, 2018. EPA-EFE/Marta Perez

In the aftermath of the Catalonia vote, political discourse in Spain resembled that of the United States in late 2016, with many fingers pointing at alleged Russian interference. A government-supported research institute suggested that Russia had deployed “trolls, bots and fake accounts” to further sow social division in Spain. In November, Spain’s foreign minister raised the issue of Russian interference in Catalonia at a meeting of the EU’s Council of Ministers.

Many Spanish media outlets, such as El País, the most widely circulated daily newspaper in Spain, supported the narrative.

The European Union’s “fact-checking team”, East Stratcom Task Force, found a few examples of widely circulated pieces of disinformation originating from Russian sources: one claimed that Spanish is being taught as a foreign language in Catalonia; another claimed that Catalonia planned to recognise Crimea as a legitimate part of Russia; one more reported that EU officials supported violent measures in Catalonia.

Russia has denied the claims as “hysteria”, while many Catalans say that the Spanish government has exaggerated the problem.

Some journalists are also sceptical.

“Some politicians in the conservative side consider this to be true, but there is simply no evidence,” she said, emphasising that the amount of actual “fake news” stories on the issue was insignificant.

“A lot of the mainstream media supports this narrative too, but we are still trying to get to the bottom of this story.”

Pérez said that many false stories and out-of-context pictures were circulated on social media as the events unfolded in October, but that “mistakes were made by both sides”, and that the content, which was picked up by some media outlets, was generally not intended to be misleading.

Some observers believe that the Spanish government could be using the “fake news” narrative for its own benefit.

Commenting on the government’s claim that “thousands of Russian trolls” had sought to spread “fake news” related to Catalonia, Jiménez said: “There are some for sure, but our fear is that the government is using this story to justify legislation that undercuts freedom of expression.”

Stepháne Grueso, a board member of the Platform for the Defence of Free Expression (Plataforma en Defensa de la Libertad de Información, PDLI), a Spanish advocacy group, told IPI that the government might be using the “fake news” discourse to “justify overreaching legislative efforts”.

He commented: “Of course, you can attempt to tackle the issue with legislation to some degree. But you can’t touch freedom of information or expression. You always have to comply with fundamental human rights.”

What the government should be focusing on, experts said, is supporting media literacy.

“In other countries, there are already programmes to promote critical thinking, to teach how to spot false information and fake pictures, for example,” Jiménez pointed out.

Observers say, however, that efforts to improve media literacy in Spain are hampered by a lingering distrust of the mainstream media that began with the onset of the country’s economic crisis in 2008. During that time, concerns grew that prominent media houses had fallen under the sway of their financial creditors.

”The biggest problem in Spain has been the political and economic dependence of media,” Pérez said.

Grueso agreed, noting that while media outlets “have a big responsibility” when it comes to educating people, Spain’s traditional media suffered from a “reputational problem” that had led people to start doubting the reality portrayed in newspapers and television.

Both he and Jiménez also emphasised the need for news outlets to fact-check even amid the fast flow of information and to carefully differentiate between fact and opinion.

According to Jiménez, in some cases media outlets – particularly those struggling financially – were “no longer careful with the content they published” as long as they reached an audience.

The overall message, though, remains one of educating the public.

“We have a generation of young people who get their news from the Internet and can’t distinguish between news and opinion,” Grueso said. “We have to teach them how to consume information.”