Austria has dealt with its fair share of disinformation and accusations of “fake news” amid two recent, highly divisive elections: a presidential election in 2016 and parliamentary elections in October 2017, both notable for the successes of traditional outlier parties. The former saw the triumph of the former head of the Green party, while the latter ushered the far-right Freedom Party (FPÖ) into government for the first time in more than 10 years.

Journalists and media experts say that though the worst effects associated with what is known as the “fake news” phenomenon have thus far been avoided, the country has been left with confusion about the term “fake news” itself as well as with a general mistrust of the media sown by an increasingly bipartisan press.

“We have to be very careful in using the term ‘fake news’,” Katharina Schell, a chief editor with the Austrian Press Agency (APA), said in an interview with the International Press Institute (IPI). “While almost everyone uses the term, no one discloses what they think it means.”

She added: “Austria may not have a fake news problem per se, but there is certainly a problem with misinformation, manipulative content and misinformation strategies.”

Ingrid Brodnig, a journalist and author of the book “Lies on the Web: How Fake News, Populists and Unchecked Technologies Are Manipulating Us” (2017), also told IPI that she disliked using the term “fake news”. But she said that there were still “plenty of falsehoods and misleading content on the Internet”, with the tabloid press in particular adding to the confusion with stories that were “simply untrue”.

As in many other European countries, the term “fake news” emerged as a fixture in Austria’s public consciousness only within the last two years.

“I think we’ve seen a spike in fake news since the refugee crisis started,” Fabian Schmid, an editor at the daily Der Standard, told IPI. He described the summer and fall of 2015 – when the influx of refugees via the so-called “Balkan route” was at its peak – as a watershed moment.

That period saw an increase in the popularity of far-right platforms such as info-direkt.at, wochenblick.at, and unzensuriert.at, which took advantage of the fact that Austrian mainstream media outlets were viewed by some as having uncritically reported on the decision to open the country’s borders to refugees.

In general, he said, “most fake news in Austria is tied to far-right ideologies,” adding that the scope of “fake news” in Austria was similar to that in Germany “as far as topics and sources go”.

“There is a kind of network of [German-language] far-right media sites that work together and reference one other,” he said.

One of the most notable instances of false information in recent years had nothing to do with the refugee crisis. During the 2016 presidential election, a fake Facebook profile linked to far-right circles falsely claimed that the Green-supported candidate and eventual winner, Alexander Van der Bellen, was suffering from dementia and cancer. Van der Bellen was eventually forced to publish his health records. (The same fake profile was later the target of successful legal action by the Green party for defamatory posts against the party’s leader, Eva Glawischnig.)

Still, not all false stories in Austria originate from the far right. “There are leftist groups as well that use information the same way, by tweaking, framing, omitting,” Schell said.

Also notable in Austria is that certain politicians have made good use of the media divisions in the country.

Schmid said that the FPÖ and its leader, Vice-Chancellor Heinz-Christian Strache, regularly shared unverified rumours, usually related to immigrants and their alleged crimes. The FPÖ has a strong social media presence; Strache alone has around 770,000 Facebook fans.

“On one occasion, journalists disproved the account Strache shared, so he deleted it,” Schmid recounted. “Of course, tens of thousands had already read it – I’m not sure they got the correction.” 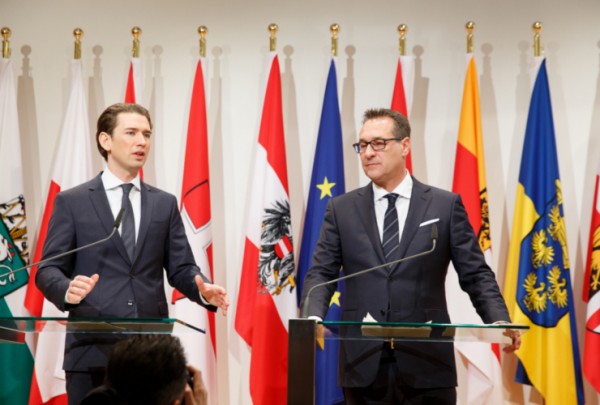 In Austria, it is not only far-right online platforms and social media accounts that are sparing when it comes to issuing corrections: the country’s traditionally strong tabloid sector also presents a challenge.

“When you look closer at some of [the tabloid] stories, they are simply untrue,” Brodnig said. “The reporting in tabloid papers is not very detailed. They pick these stories up and don’t bother correcting themselves.”

That problem is magnified by the reach of the tabloid press, led by the influential Kronen Zeitung, by far Austria’s largest newspaper by circulation with 750,000 copies sold daily, equivalent to nearly 12 percent of the country’s population.

Brodnig cited a widely shared story published by the tabloid Österreich in December 2017. The paper claimed, among other things, that St. Nicholas – a figure who brings presents to children on Dec. 5 – was banned in a Viennese school because of the number of Muslim students there.

“Many parts of the article were false,” Brodnig said. “It was based on the telling of one anonymous father, and it was published as fact.”

Nevertheless, the story gathered well over 20,000 reactions on Facebook. According to Brodnig, this likely made it the most read news story of the day not only in Austria, but also in the whole of German-speaking Europe.

Separately, Brodnig also highlighted the role of new “hyperpartisan” websites, such as unzensuriert.at, noting that there seemed to be a sort of alliance between these websites and right-wing politics.

Brodnig said that while these websites are not owned by the political right and cannot be called “fake news” per se, their stories are often “misleading, biased and express very narrow views”.

“The debate about fake news itself shows how polarised the country is,” she said. “On the right, we see people using the term ‘fake news’ very liberally to discredit traditional media. For them, we are the lying press.”

Experts in Austria say that it is partly the sheer amount of information available that leads to confusion among readers and viewers.

“People may not have lost trust [in the media] in general, but they realise there is more and more information, and they know that not all of it can be trusted,” Schell said.

A Eurobarometer survey in 2017 found that Austrians’ confidence in the media had deteriorated, especially among those aligning themselves with the political right.

Brodnig, however, emphasised that though discussion mainly centred on right-wing populists, people on both ends of the spectrum had become more sceptical.

“On the right, there is extreme distrust in the media. On the left, there is distrust in objectivity and a debate on quality coverage and journalistic bias. People are not sure whom to trust.”

For Schell, the best approach that can be taken by quality media outlets is to stick to journalistic standards and the usual journalistic toolset: checking facts and asking questions.

“One approach that isn’t considered enough is to go after sources of fake news, to investigate their motivations and how they work,” she said, noting that it is the job of media “to explain the world to people”.

Schell is sceptical of government or legislative initiatives to fight “fake news” given the problematic task of asking regulators, telecom companies and network providers “to decide what fits their criteria of truth”.

For his part, Schmid noted that it was difficult to find an approach that works, because when journalists attempt to address false stories, they run the risk of spreading them further.

“In this process, we have all lost some credibility,” he said. “We have to find ways to become more transparent and explain our work a lot better; maybe that’s not the worst thing.”

He said that while public perception had been affected by the sheer amount of disinformation available, it was not clear if “fake news” had actually managed to change political views.

“There was already a large group of people that were opposed to immigration, for example, and they have just found content that reinforces their own beliefs,” he said.