Members of the Black First Land First (BLF) movement - including BLF leader Andile Mngxithama, in the foreground - stand on counters in the Main Street branch of ABSA bank in Johannesburg, South Africa during a mass action against the bank on June 28, 2017. EPA/STR

A Johannesburg court today granted South African journalists’ request for an order to stop a campaign of intimidation by activists from a group seeking expropriation of white-owned land who last week picketed the home of an editor and published a list of journalists to target.

The move came after an incident last week in which BLF protestors picketed outside the Johannesburg home of Peter Bruce, editor at large of the Tiso Blackstar media group, and attacked another journalist who tried to photograph the demonstration.

According to SANEF, the BLF has targeted Bruce and other journalists for their reporting on government corruption and maladministration.

The court today granted SANEF’s request to prevent the BLF and its leader, Andile Mngxitama, from gathering outside threatened journalists’ homes, from threatening them with violence in social media and from inciting harm against them in public interviews.

Outside the courthouse, Mngxitama criticised the ruling, which takes effect tomorrow, for having been issued by “a white judge, who like all white people comes from a framework of thinking which puts whiteness first”. He previously had dismissed the application for the order, saying journalists are “sensationalising” things and “scandalizing black leaders”.

SANEF Chairperson Mahlatse Gallens told IPI that she saw the recent threats as a clear attempt to silence journalists and media reporting on, among other things, corruption, “state capture”, the wealthy Gupta family and Mngxitama. The Indian-born Gupta family reportedly wields considerable influence in government affairs under South African President Jacob Zuma. Many South African newspapers have also claimed that BLF has ties to, and is supported by, the Guptas.

According to Gallens, the recent events are part of a larger, orchestrated campaign to attack journalists.

Gallens recounted that SANEF previously demanded that the BLF stop its threatening actions against journalists, but that the group replied by expanding its threats. SANEF ultimately turned to the courts to protect its editors, she said.

In a statement that SANEF released on Tuesday, Gallens said that the court should not condone “such violence and threats against the media because a free and pluralist media is vital to the democratic functioning of the Republic”.

She continued: “This means that as journalists, publishers, editors, bloggers and other media actors we must be able to carry out our tasks without fear of intervention or reprisals – which requires adequate protection from violence, threats and pressures. … [A]n attack on one journalist or media worker can have a chilling effect on others, particularly when perpetrators can act with impunity, as the [BLF and Mngxitama] do.”

The recent escalation began on June 29 at Bruce’s home, when a group of around 20 BLF protesters gathered holding placards. They reportedly hurled insults at the editor and wrote “land or death” on his door. Bruce told Business Day that he believed the incident could be linked to an opinion piece published in the paper earlier that day in which he voiced suspicions that the Gupta family was targeting him with surveillance and intimidation over his reporting on the family’s affairs.

Bruce told Huffington Post SA after the demonstration that he felt his freedom of speech was under attack, but that he would not be deterred from writing on sensitive topics.

He also defended his opinion piece, saying: “I thought it was a fairly up and down column. I’m not a friend of the Guptas as people already know. I’d be lying if I said it wasn’t scary. I have been doing what I think is the right thing as a journalist for 45 years. I couldn’t stop writing about the Guptas if I tried.”

Business Day reported that BLF protesters assaulted Tim Cohen, an editor with the publication, outside Bruce’s home. A protester hit Cohen, who had gone to check on Bruce after hearing about the protest, when he attempted to photograph the scene with his mobile phone.

“The police separated us and then Peter came out so it was clear that he was okay and I decided not to inflame the situation, so I left,” Cohen was quoted as saying.

Following the incident, the BLF last Friday released a list of journalists they planned to target. According to SANEF, the BLF has since threatened multiple journalists with similar protests at their homes. The movement said in a statement that it was targeting “racist” journalists in a bid to fight racism, slander, fake news and the “covering up of white corruption under the guise of journalism”.

On Sunday, South African Minister of Police Fikile Mbalula took a strong stance against the BLF, warning that he “would use a harsh hand against people who marched to journalists’ homes to intimidate them”. Mbalula said that the ruling African National Congress (ANC) party can “never agree with those that attack journalists”.

Mbalula went on to say that “media acceptance, not just mere tolerance, is a cornerstone of our democratic order”, adding: “We will protect all journalists from all media houses.” 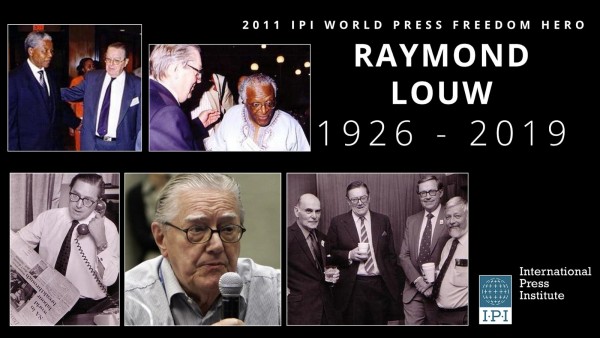