Uganda’s President Yoweri Museveni attends the High Level Consultation Meetings of Heads of State and Government on the situation in the Democratic Republic of Congo at the African Union Headquarters in Addis Ababa, Ethiopia January 17, 2019. REUTERS/Tiksa Negeri

On Monday, November 4, over twenty journalists from different media unions and organisations were detained by police in riot gear as they marched through the streets of the capital Kampala to speak out against alleged police abuses.

The allegations stem from the arrests and attacks on reporters covering student protests last month, during which journalists were reportedly beaten and barred from entering the university grounds by the Ugandan police and military.

As around 80 journalists marched towards the police headquarters in downtown Kampala on Monday to hand over a petition condemning the violence to the police chief, they were intercepted by police in riot gear, Diana Nandudu, from the Human Rights Network for Journalists-Uganda (HRNJ-U), told IPI.

“Tear gas was fired at the marchers and journalists from different unions were assaulted and arrested,” she said. The incident took place despite the groups having scheduled a meeting with the Inspector General of Police, she added.

Those arrested were taken to the central police station but released without charge two hours later, Nandudu confirmed.

“The situation for press freedom here is not good at all,” she told IPI. “The climate is very volatile and as we approach the 2021 elections, we fear things could get even worse.”

“This is a blatant attempt to gag criticism of the government and bury the attacks by security forces on media last month,” he said. “Ugandan security services are leading the assault of the country’s press freedom through their arbitrary arrests and heavy-handed actions. We call on the government to end its crackdown and to allow journalists to do their job freely.” 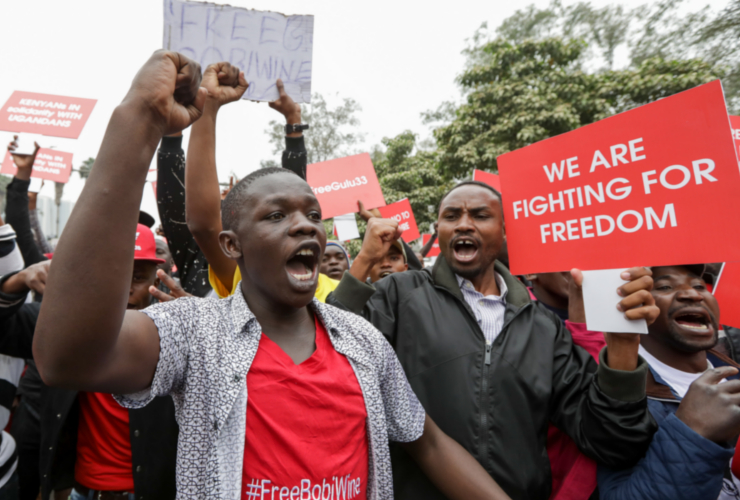 The government of long-term president Yoweri Museveni, has often been accused of cracking down on media freedom and violating human rights. With national polls in 2021, Museveni is widely expected to run again for a fifth term, possibly allowing him to extend his rule until 2031.

However, he is facing strong opposition from pop star-turned-politician Bobi Wine, who is facing trial over treason and organising street protests last July.

Outlets giving coverage to the opposition candidate have faced repercussions. In May 2019, media executives from 13 broadcasting stations were suspended by the country’s media regulator after reporting on Wine’s court case.

Other broadcasters who aired interviews with Wine also faced repercussions. Radio stations giving coverage to other prominent opposition figures have been shut down.

Other journalists have also reported receiving threats over the phone and that acts of intimidation and violence against reporters are common. A team of BBC journalists reporting inside the country were detained by police in February 2019.

The incidents have led to accusations the government is trying to gag media freedom and stifle coverage on opposition figures as part of the president’s run for re-election.

Earlier this year, the government faced similar criticism for imposing a tax on the use of social media. The stated aim of the toll was to tame “idle talk” and “gossip” online and raise revenue. Rights groups said the tax was a further attempt to restrict free speech.

Museveni is one of Africa’s longest serving leaders, having been elected president in 1986. He rose to power after taking part in rebellions that overthrew Idi Amin, one of the cruellest despots in African history.

Initially celebrated as part of a new wave of African leaders, during his long rule he has been accused of undermining the country’s democracy by suppressing political opposition, circumventing constitutional term limits and the presidential age limit.