As flares illuminated Republic Square in the Slovenian capital Ljubljana in red light, photojournalist Borut Živulovič stood amongst the crowd with his camera and equipment covering anti-Covid-19 lockdown protests against the government on November 5.

As he was documenting the clashes between protesters and riot police, an unidentified individual approached the photojournalist from behind and violently hit him over the head, knocking him the unconscious. The individual then returned to kick his motionless body as it lay on the ground.

After receiving medical help from colleagues at the scene, Živulovič woke up in a hospital bed at the A&E department later that night, where he underwent surgery to implant two titanium plates into his fractured jaw.

Živulovič’s horrific experience, far from being an isolated incident, is one of the starkest examples of a trend observed by press and media freedom groups in Europe in the last two-and-a half months: a wave of physical attacks on journalists covering anti-lockdown protests.

Since the beginning of September, IPI and its Media Freedom Rapid Response (MFRR) partners have recorded at least 58 incidents involving assaults, physical aggression, threats and intimidation against journalists covering demonstrations linked to COVID-19, in Germany, Italy, Slovenia, Austria and Portugal.

IPI Deputy Director Scott Griffen noted that while these attacks had come predominantly from anti-mask, anti-lockdown or conspiracy theory groups, others had come from members of far-right groups which had hijacked rallies to push their own agenda, such as the Forza Nuova in Italy or National Democratic Party of Germany.

Griffen added that while other regions were not immune from the trend, the EU has seen a stark rise in such incidents. With many states in the bloc experiencing a second or third wave of infections, public frustration and economic woes over continued lockdown measures have boiled over into frequent protests, which have been accompanied by an increase in attacks on the media reporting them.

According to IPI’s COVID-19 tracker, while numerous journalists were attacked at anti-lockdown demonstrations in the first wave between March and May 2020, incidents had become more frequent and severe in recent months, raising growing concerns about the safety of journalists and the willingness of editors to send reporting crews into the field.

“The number of serious physical attacks on journalists reporting on anti-lockdown rallies in the EU in the last couple of months is a worrying reminder of the dangers journalist face in reporting from protests”, Griffen said. “In the majority of cases we have documented, reporters and photojournalists were clearly identifiable as members of the media through ‘PRESS’ jackets, TV logos, or recording equipment, indicating that they were targeted specifically because of their profession.

“While it is hard to say exactly what is behind this, it is clear that part of the issue is the growing mistrust in mainstream media outlets among certain groups caused by increasing polarization, disinformation and concerted attempts by politicians to discredit and debase critical reporting. In an environment when facts are no longer sacred and the media is identified as an enemy to be confronted, journalists themselves are becoming the target.” 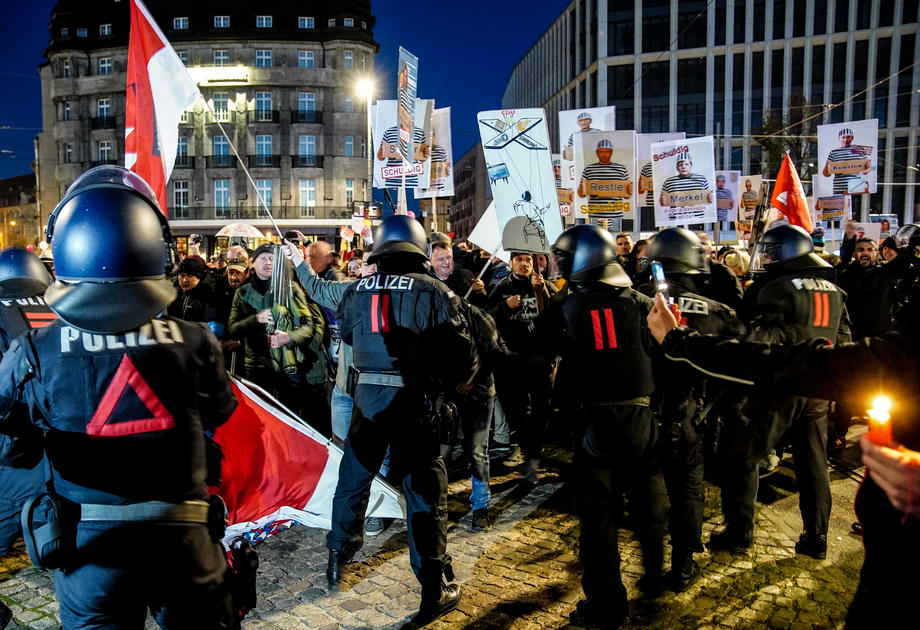 Protesters face riot police during a protest against the coronavirus restrictions, in Leipzig, Germany, 07 November 2020. The protests organized by the Third Position movement ‘Querdenken’ were held against government-imposed semi-lockdown measures aimed at curbing the spread of the coronavirus pandemic. EPA-EFE/FILIP

Wave of physical attack and threats

Among the most serious incidents were recorded in the German city of Leipzig, where in one day at least 43 journalists faced harassment, insults and obstruction by protesters at the “Querdenken” demonstration on November 7, according to the German Union of Journalists (DJU).

During the protest, which was attended by people from far right and left political groups criticizing the government’s COVID-19 response, media workers were threatened with violence and others were chased and physically attacked. Similar threats by “Querdenken” protestors were documented during an anti-COVID-19 measures rally in Berlin on October 25.

In Italy, meanwhile, at least nine incidents involving 14 members of the media were recorded in six different cities over a three-week period in October, including Rome, Naples and Florence. Some journalists were physically assaulted or had glass bottles and stones thrown at them, while others were chased or faced death threats from anti-mask protesters.

On several occasions anti-media songs were chanted, including journalists being denounced as “terrorists” and “liars”. Several of the attacks were reportedly carried out by members of the Italian far-right political party, Forza Nuova, who had organized marches.

In Portugal, news crews of television channel Televisão Independente (TVI) and Observador radio were physically pressured and insulted as they covered a demonstration in the capital Lisbon on November 24 which had been organized by groups representing the restaurant industry protesting against what they see as a lack of state aid during the pandemic.

In Vienna, a camera crew for the Austria Broadcasting Corporation (ORF) also faced intimidation and harassment as the crew was covering an anti-lockdown protest in the city on November 8. At one point, a camera operator was surrounded by a ring of protesters who booed and chanted “Lügenpresse” (Lying Press).

Griffen added that the overall number of incidents across the EU was likely to be far higher than the 58 recorded as incidents of threats and aggression may not be reported. With the exception of one attack in Italy, investigations by law enforcement have so far been unable to identify or bring to justice those responsible for these incidents, including Živulovič’s attacker in Slovenia.

On other occasions the threats to journalist come from police themselves. In the UK, journalists and photographers covering an anti-lockdown protest in London on November 5 were ordered to leave and threatened with arrest by police, despite being legally permitted to be there. Similar threats of arrest and obstruction were also reported during the protest in Leipzig. 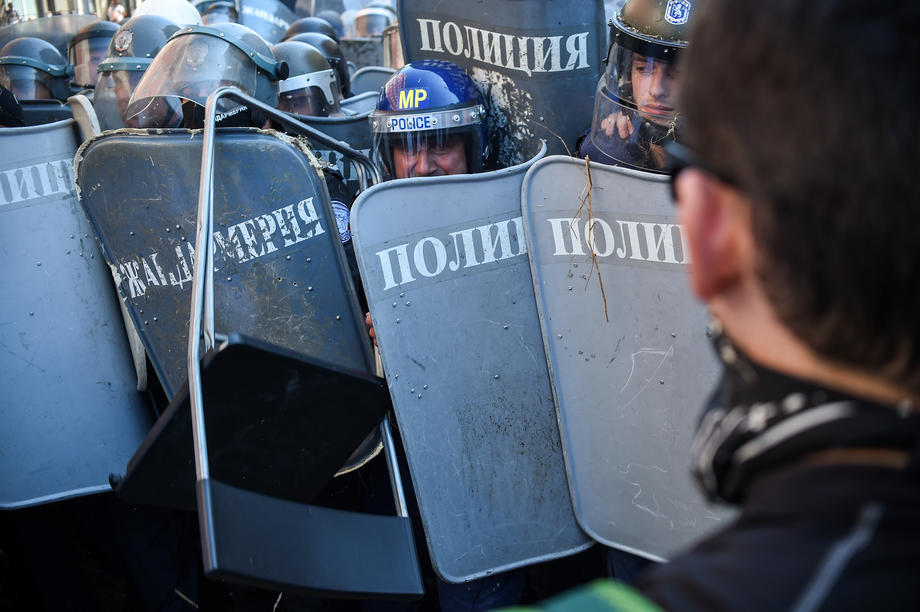 Gendarmerie clashes with protesters during an anti-government protest held in front of the Parliament building in Sofia, Bulgaria, 02 September 2020. EPA-EFE/Borislav Troshev

Wider rise in attacks at protests

In addition to COVID-19-related protests, a slew of cases involving journalists being detained, attacked and intimidated at other demonstrations in recent months have been documented in EU countries. While police and law enforcement were responsible for just a few of the incidents at recent anti-lockdown protests, this changed when it came to other anti-government protests, Griffen said.

On 11 November, for example, journalists and photojournalists were injured by police officers as they covered violent protests during the Independence March organised by far-right groups in Warsaw. Among those badly injured was Tomasz Gutry, a 74-year-old photojournalist of the Tygodnik Solidarność, who was shot in the face with a rubber bullet from a short distance, requiring surgery to remove the ball from his cheek.

In Bulgaria, freelance journalist Dimitar Kenarov was assaulted by officers as he reported from the scene of large-scale, anti-government protests in Sofia on September 2. Kenarov was handcuffed and kicked in the head by officers who also damaged his camera, despite repeatedly identifying himself as a journalist and producing his press ID.

On November 17, during a demonstration in the Greek capital Athens, traffic police detained and harassed Antonis Rigopoulos of Documento and Koutipandoras.gr. During the same event, colleague Marios Aravantinos was struck by police riot shields on the hand in which he was holding a mobile phone to film a police arrest.

In other attacks, far right groups were again responsible. On October 23, two journalists for leading daily newspaper Gazeta Wyborcza, Magda Kozioł and Joanna Urbańska-Jaworska, were assaulted by masked men as they documented a group of 30 black-clad men who were part of a football hooligan and nationalist group intimidating protesters during the Women’s March in Wrocław.

The German far-right group PEGIDA was also behind the abuse and threats against two female radio reporters from the MDR regional public service broadcaster during a protest in Dresden on September 13.

In other instances, members of left-wing groups were behind physical attacks. In Spain, for example, journalist Mayka Navarro was surrounded by anti-monarchy and pro-Catalan independence protesters, intimidated, and accidently hit with a flagpole as she was delivering a live broadcast in Barcelona on October 9.

In Slovenia, where Borut Živulovič was hospitalized, a camera operator for Slovenian news outlet Nova24TV was surrounded by anti-government protesters during a demonstration in the capital Ljubljana on October 16. One man tried to force him to stop filming and rip the camera out of his hands.

This report by IPI is part of the Media Freedom Rapid Response (MFRR), a Europe-wide mechanism which tracks, monitors and responds to violations of press and media freedom in EU Member States and Candidate Countries. 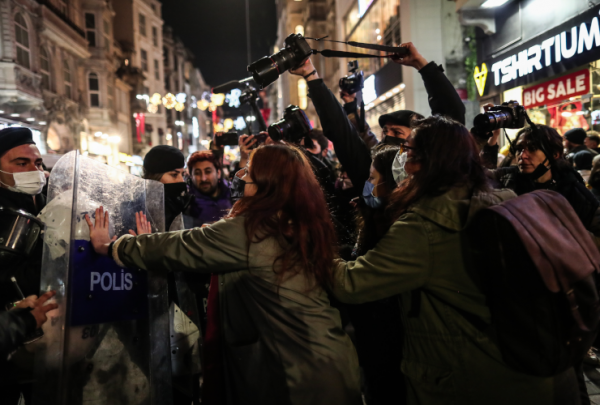