Read this statement in Italian here

The Media Freedom Rapid Response (MFRR) today expresses our serious concern over the string of physical attacks, death threats and acts of intimidation against journalists and media workers covering issues related to COVID-19 and recent anti-lockdown protests across Italy.

Over the last three weeks, MFRR partners have documented at least nine incidents involving 14 members of the Italian media in six different cities, including one photojournalist being hospitalised with a head trauma following an attack.

The majority of recorded incidents have involved reporters and TV crews being harassed by protesters taking part in demonstrations against the government’s COVID-19 measures, many of which were organised and attended by far-right groups.

On several occasions, Italian newspapers and media freedom groups have reported that anti-media slogans or songs have been chanted by the crowds, which have included death threats and journalists being denounced as “terrorists”.

Our organisations welcome the swift condemnation of these attacks by the Italian officials and urge law enforcement authorities to thoroughly investigate all incidents to identify those responsible and hold them to account.

In the most recent incident, on 31 October, photojournalist Tommaso Germogli suffered a head trauma after being punched by a street vendor as he was covering the adherence to the social distancing and mask regulations in Florence for the regional newspaper, La Nazione. According to his employer, he was diagnosed with a head trauma but was released from hospital a few days later. Police were alerted and a criminal complaint has been filed.

A day previously, on 30 October, several journalists covering anti-curfew protests in the same city were subjected to insults and intimidation by protesters. Among those targeted were photojournalists from local newspaper Corriere Fiorentino. Its reporter Simone Innocenti also faced threats via social media, according to media reports.

The same night, Valerio Lo Muzio, a video journalist working for la Repubblica was threatened, pushed and chased by unidentified individuals as he covered a similar protest in Bologna (pictured below). Video footage shows several protesters swearing and shouting at him, with some calling him a “terrorist journalist”. According to Articolo 21, some of the protesters bore banners and chanted anti-journalist slogans, including: “Jour-na-list, you are the first on the list.” 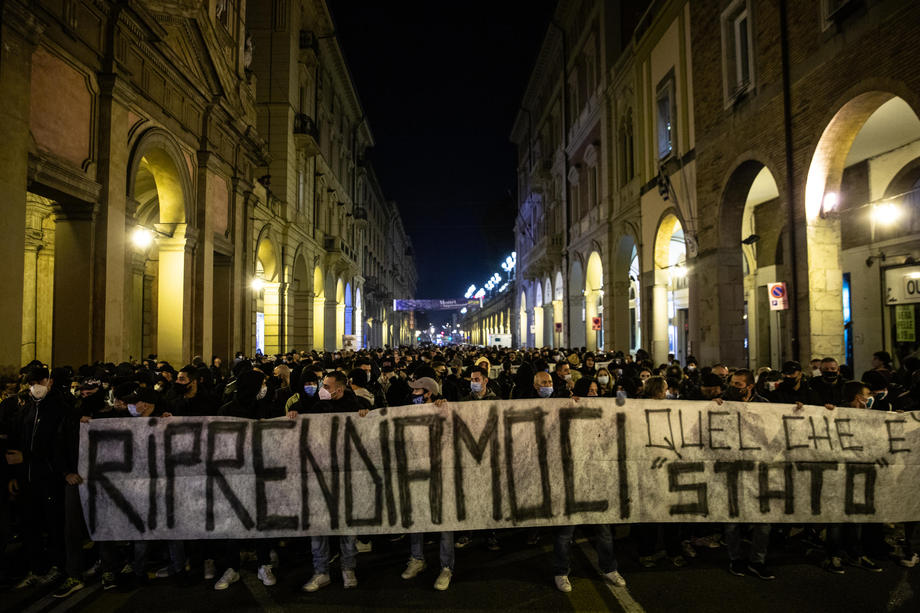 Demonstrators during a protest against the government decree in force to face the second wave of the Covid-19 epidemic, Bologna, Italy, 30 October 2020. EPA-EFE/MAX CAVALLARI

On 28 October, according to reports, a journalist and a camera operator from Rai 2 news programme, TG2 were intimidated and robbed of their equipment by protesters as they were covering anti-curfew protests in the Sicilian city of Palermo. Their employer said protesters also tried to beat Vincenzo Frenda and his camera operator Ninni Farina and then ran away with their microphone and boom pole.

In separate incidents on 26 and 28 October, journalists reporting from protests in Genoa were targeted by insults and had glass bottles thrown at them. According to reports, the intimidation became so severe that police asked the media workers to leave the scene to try and avoid further escalation.

In a similar incident on 23 October, Paolo Fratter, a reporter for Sky TG 24, and camera operators Vincenzo Triente and Fabio Giulianelli, were also attacked and had glass bottles thrown at them as they covered protests in Naples. One man wearing a motorcycle helmet pushed the camera operator and another aggressively pinned Fratter to the bonnet of a car. Giulianelli was hit in the leg by a stone but neither journalist was seriously injured.

On 19 October, journalist Mimmo Rubio was forced to barricade himself inside his house after receiving threats from a crowd protesting COVID-19 measures in Naples. Video footage shows a group of around 20 people wearing helmets and driving scooters chanting and shouting insults. After the incident, Rubio was given police protection to ensure his safety and the prosecutor of the Republic of Naples initiated a case. 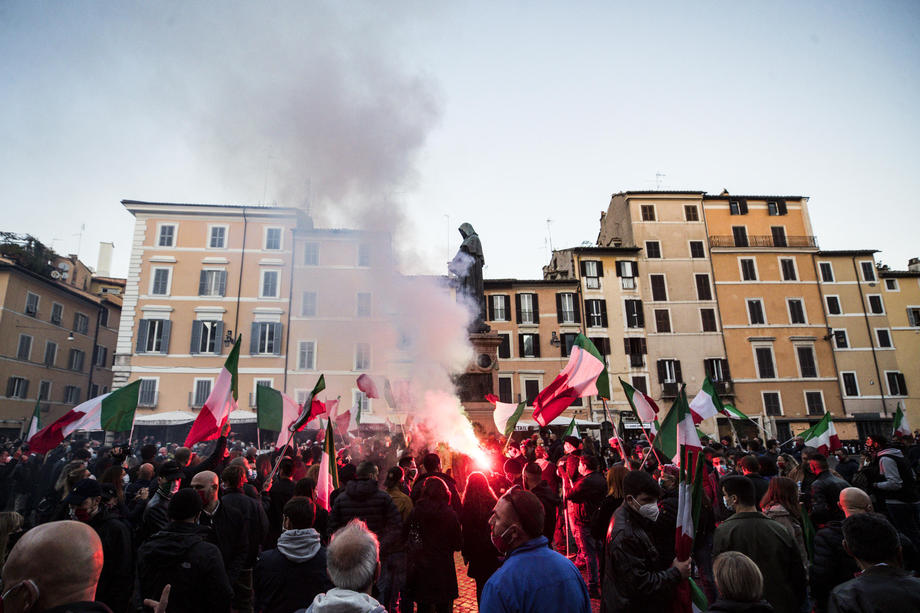 The previous week, on 10 October, Saverio Tommasi, a journalist at Fanpage.it, was insulted and threatened by anti-face mask protesters as he was reporting from a demonstration in Rome. Tommasi was sworn at and targeted with death threats, with one man screaming at him: “You piece of shit, you’ll die shot”. At one point, the situation became so volatile that Tommasi was escorted away under police protection.

The members of the MFRR strongly condemn these incidents and welcome the steps taken so far by the government to ensure protection for those targeted by the most serious threats.

As set out in the Press Freedom Police Codex, developed by ECPMF and partners and based on the case law of the European Court of Human Rights, journalists have the right to gather information and police should protect them from interference, especially during demonstrations. Each and every incident must now be throughout investigated by Italian authorities to ensure those responsible are identified.

Worryingly, these attacks are worsening an already hostile climate for journalists in Italy and will have implications for media organisations across the country who will think twice before sending reporting crews onto the streets.

We also welcome the statements of condemnation by Italian journalist groups including the Federazione Nazionale Stampa Italiana (FNSI) and Articolo 21, as well as regional trade unions and press associations in drawing attention to these cases.

Our organisations will continue to monitor the situation over the coming days and weeks and will report all violations to the Mapping Media Freedom (MMF) and Council of Europe’s Safety of Journalists platforms. 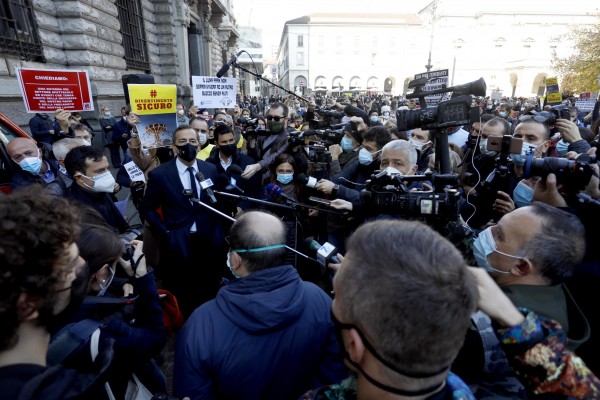 Spike in intimidation against journalists in Italy during pandemic

On the evening of 24 October, Italian journalist Raffaella Cosentino was sent to Palermo t…
Read More