On November 5, 2020, photojournalist Borut Živulovič, who works as a photographer for the agency Bobo and a freelancer for Reuters, was hospitalized after suffering a blow to the head while covering violent clashes with riot police in and around Republic Square.

Živulovič told IPI that a photojournalist colleague saw a man in the crowd hit him in the head as he turned around. He said he was knocked unconscious from the blow and woke up in hospital hours later.

Živulovič said the colleague also saw the attacker return and kick his body as he lay on the ground. He was treated for a fractured jaw and underwent surgery at the emergency department at the Ljubljana Clinical Center, where he remained for three days.

In a statement, his employer said Živulović was “attacked and beaten unconscious by the perpetrators”, adding that the injury was not thought to have lasting damage.

The Slovenian Journalists’ Association (DNS) said that the attack had been carried out by an unknown perpetrator and occurred when Živulovič had been “physically confronted” at the rally, which according to media outlets was attended by around 500 protesters from different groups speaking out against the government and its coronavirus measures.

The Slovenian Journalists’ Association (DNS) told IPI that the attack had been carried out by an unknown perpetrator and occurred when Živulovič had been “physically confronted” at the rally. Živulovič was later treated for injuries at the accident and emergency department at the Ljubljana Clinical Center.

The same night, Vladimir Vodušek, a well-known journalist, presenter and founder of Topnewsa.si and Top TV, said he was also assaulted by a man who kicked him to the ground, causing a minor injury to his leg.

Several other media outlets reported that their news crews had been aggressively pushed and faced obstruction, threats and intimidation as they reported on the protests. Photojournalist Voranc Vogel was also struck in the shoulder by an object thrown at police but was not injured, according to reports.

“We strongly condemn each and every aggression against journalists and media workers covering protests in Slovenia last night”, IPI Deputy Director Scott Griffen said. “Media simply trying to do their job have become the target of deliberate and unacceptable acts of violence. It is essential that law enforcement authorities do their utmost to identify those behind these attacks and ensure those responsible are held accountable.”

The aggression towards journalists came amidst wider clashes as protesters threw flares, stones and concrete blocks at riot police, in a demonstration reportedly organised by Anonymous Slovenija and attended by around 500 people from anti-government, anti-lockdown and conspiracy theory groups

DNS said in a statement: “We reiterate that any violence is unacceptable and that such a situation cannot become a normal professional risk in the work of journalists, photojournalists and cameramen who carry out their basic mission in the field – collecting and disseminating information to the public who deserves to be informed.”

The Association of Journalists and Publicists (ZNP) in Slovenia also denounced the violence, saying some of the attacks had been carried “deliberately, intentionally and insidiously”.

In the wake of the protests, Slovenian Interior Minister Ales Hojs claimed that the media including POP TV had been “supporting” the protests for months and were partly responsible the violent protests. In a subsequent interview on national television, Hojs later doubled down, again saying that media would have to take part of the blame for attacks on police.

DNS pushed back saying the Minister’s comments were part of a wider attempt by the government to unfairly discredit and undermine the media doing their jobs in reporting on a matter of public interest. Thursday’s clashes were separate from the weekly “Friday Bicycle Protests” that started mid-March against the administration of Prime Minister Janez Janša.

Griffen added that the minister’s comments were the latest in a series of attempts by figures within the current administration to undermine the credibility and professionalism of independent media – including the public broadcaster RTVSLO – which have reported on recent protests.

In a widely criticized move in April, Hojs called for journalists and media professionals who had reported legally from the scene of anti-lockdown protests in April to face criminal prosecution for allegedly violating lockdown measures, signalling out Grega Repovž, editor-in-chief of the left-leaning weekly Mladina, an outlet critical of the government, as having attended.

In a separate incident on October 16, a camera operator for Slovenian news outlet Nova24TV was aggressively surrounded by anti-government protesters during a demonstration in Ljubljana and well-known Slovenian rapper Zlatan Čordić tried to rip the camera out of his hands and disrupt the filming. 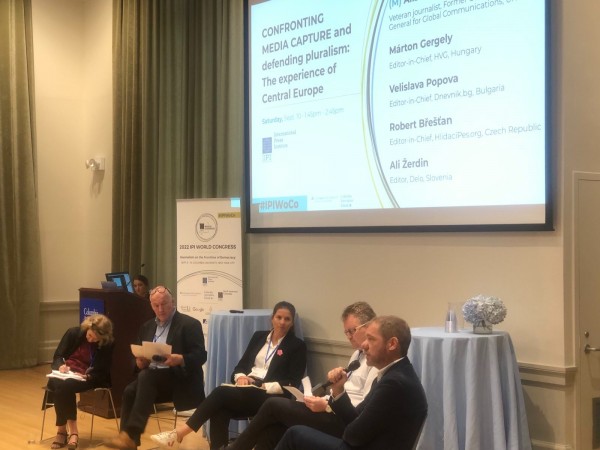 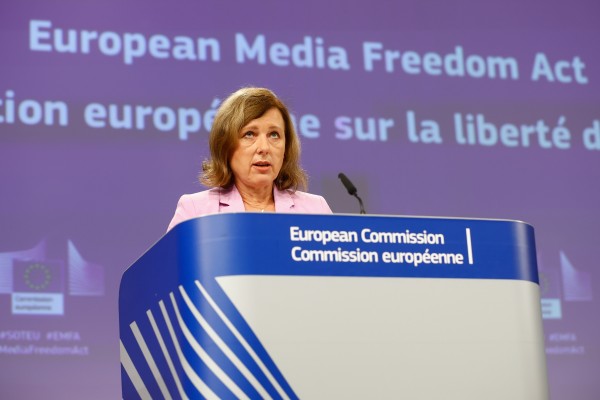