People pose around a poster of journalists Nadhir Ktari (L, in poster) and Sofiene Chourabi, who went missing in Libya in September, during a demonstration in Tunis on Jan. 9, 2015 over their disappearance. REUTERS/Anis Mili

The International Press Institute (IPI) today expressed concern over the fate of two Tunisian journalists who went missing in Libya in September 2014 following a new claim that they had been killed at the hands of the Islamic State group.

A Libyan detainee believed to be a member of the group said in an interview aired on Saturday on private channel Libya Al-Hadath that he had witnessed the execution of Sofiène Chourabi and Nadhir Ktari in the eastern port city of Derna in 2015.

The Tunisian Ministry of Foreign Affairs announced on Sunday that it is undertaking all necessary steps to verify the authenticity of the statement.

In April 2015, the internationally recognized Libyan government in Tobruk announced that Islamic State group members had killed investigative journalist and blogger Chourabi and photographer Ktari in January of that year.

Then-Tunisian Foreign Minister Taieb Baccouche announced on Sept. 7, 2015, that his ministry had “irrefutable proof” that the journalists were still alive. However Baccouche, admitting that the investigation had encountered difficulties, declined to provide further details.

IPI Director of Advocacy and Communications Steven M. Ellis called on the Tunisian and Libyan governments to work closely together to resolve the case.

“The difficult political climate in Libya and the failure of the internationally recognised government to ensure accountability for attacks on journalists has caused many journalists to flee the country or to engage in self-censorship, and those covering armed conflict and civil unrest in the country continue to be at grave risk,” he said.

“While we recognise the gravity of the overall challenges Libya faces, we urge Libya’s Presidential Council to work to ensure journalists are able to report freely and to start by determining what exactly happened to Sofiène Chourabi and Nadhir Ktari. At the same time, we also urge the Tunisian government to release any information it may have as to their whereabouts or their fate.”

The overthrow of leader Muammar Gaddafi in 2011 led to a power vacuum in Libya with no authority in full control, a development that helped the Islamic State group to gain control of several coastal cities, including Derna and Sirte. Ongoing political instability caused by rival governments and a host of militias has taken a toll on Libya’s media landscape, with journalists and media outlets facing interference from a number of different interest groups.

The proliferation of weapons and militias in Libya has led foreign media to withdraw staff due to fear of attacks and kidnappings. Remaining news organizations seem to be “increasingly controlled by militias, or fear of militias”, Brian Conley, an American journalist who has worked and trained Libyan journalists, told IPI in 2013.

According to IPI’s Death Watch, 19 journalists have been killed in Libya in the past seven years, with more than half of them – 11 – having been targeted due to their work. That tally includes six in 2015 alone, five of whom were killed after they were kidnapped at a checkpoint manned by Islamic State group militants. The five journalists – Khaled Al Sobhi, Younes Al Mabruk Al Nawfali, Abdallah Al Karkaai and Yousef Kader Boh from Libya, and Mohamed Jalal from Egypt – worked for Barqa TV, a station in eastern Libya, and were found dead in April 2015 with their throats slit.

The Islamic State group’s toll on journalists has been particularly heavy across the region, with the murders of at least two dozen journalists in 2015 in the Middle East, North Africa and Europe attributed to militants associated with or inspired by the group.

The Libyan detainee whose comments about Chourabi and Ktari were aired last weekend, Aberrazek Nassef Abderrazek Ali, said that Islamic State group militants captured the pair at a roadblock between Ajdabiya and Labraq before taking them to Derna, which the group controlled at the time.

Relatives of Chourabi and Ktari have campaigned for an extensive investigation into their fate following their 2014 disappearance. They have also criticised Tunisian authorities, alleging that the government has shown little interest in solving the case. 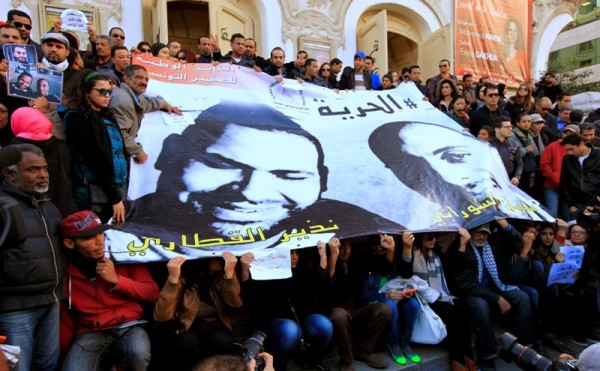