Half a year before parliamentary elections are scheduled to be held, Hungarian Prime Minister Viktor Orbán’s government has finished buying up, through various cronies and government-friendly businessmen, all of Hungary’s regional newspapers.

Since taking power in 2010, Orbán has slowly brought most Hungarian media outlets under his influence and the takeover of regional newspapers is a very important step in his long-term quest to keep dissenting voices very, very quiet.

“These newspapers offer a cheap and efficient channel for broadcasting the government’s message to a large audience,” Attila Bátorfy, a researcher at Central European University’s Center for Media, Data and Society who has written extensively about the Hungarian media landscape, said.

Hungary’s four national newspapers – two of which are directly controlled by Fidesz – are distributed across the country, but sell only a tiny number of copies outside Budapest. Eighteen of Hungary’s 19 counties have regional newspapers, almost all of which have larger circulations than any of the Budapest-based dailies.

“For many people outside of the capital, the regional paper is the only one they read,” Dániel Szalay, a journalist covering media affairs for the news website 24.hu, explained. 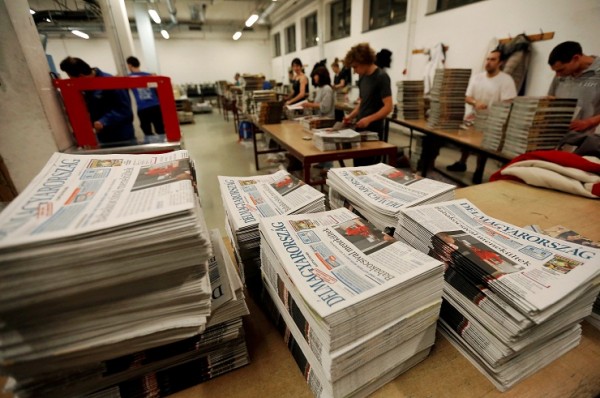 Workers assemble copies of the daily newspaper Delmagyarorszag in Szeged, Hungary, November 9, 2016. Long one of Hungary’s most respected regional papers, Delmagyarorszag was purchased by a government-friendly businessman in August 2017. REUTERS/Laszlo Balogh

For a long time, these 18 papers were owned by half a dozen media companies: some small local family businesses and some offshoots of larger media conglomerates. This began to change in 2014, when the Hungarian Competition Authority (HCA) allowed the merger of the Hungarian branches of the Swiss Ringier and the German Axel Springer groups on the condition that a number of their newspapers be sold off to prevent the formation of a monopoly.

That group of papers included Népszabadság, then the largest national paper in Hungary, as well as a number of regional outlets. These newspapers were sold to Mediaworks, a company controlled by Heinrich Pecina, an Austrian businessman who has served as a go-to partner for various Eastern European political players in a number of controversial business deals.

In 2016, Mediaworks bought another handful of Hungarian regional papers from a company owned by the German Funke Mediengruppe and then proceeded to close Népszabadság without any advance notice to any of the paper’s journalists. Days after the closure, Pecina sold Mediaworks to Opimus Group, a company owned by Lőrinc Mészáros, a former gas fitter and a childhood friend of Orbán.

The HCA swiftly authorised all of these deals, which left only a small number of regional papers outside of Orbán’s circle of influence. Pecina bought three of them in July 2017.

In August 2017, Lapcom, which publishes the national tabloid Bors and the last two remaining regional papers, was sold to Avalue Befektetési Ltd. The latter is controlled by Andy Vajna, a Hungarian film producer who made his fortune in Hollywood and became a member of Orbán’s small circle of trusted businessmen, who also owns TV2, one of the two large Hungarian commercial TV broadcasters.

Lapcom’s two regional papers, Kisalföld and Délmagyarország, are the jewels in the now-complete crown of government-friendly regional dailies. The papers have circulations of 56,000 and 34,000, respectively, and have been regarded for decades as Hungary’s two best regional publications.

Kisalföld is published in Győr-Moson-Sopron, an affluent county close to the Austrian border, while Délmagyarország is published in Csongrád, in southern Hungary. The country seat of Csongrád, Szeged, is the only large Hungarian city led by a non-Fidesz mayor, the socialist László Botka. 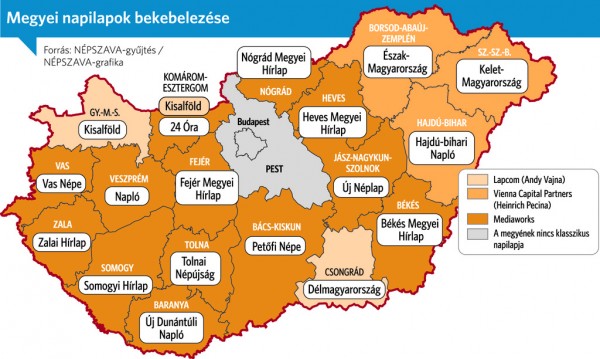 “It’s incredible to see this happening in a EU country,” Szalay commented. “Many of the remaining independent national newspapers and websites relied on the regional newspapers highlighting local problems. Now these will go completely unreported.”

Ferenc Nimmerfroh – a journalist based in Pécs, the seat of Baranya country and considered the cultural capital of southern Hungary – has felt personally the effects of the Orbán-linked buying spree. Nimmerfroh was previously the editor of Dunántúli Napló, a regional paper purchased by Mediaworks in 2014 and sold to Opimus Group in October 2016. He and his more independent-minded colleagues were sacked by Opimus almost immediately.

“We knew for months that this would happen, so it wasn’t much of a surprise,” Nimmerfroh told IPI in an interview.

In April, Nimmerfroh launched the local news website szabadpecs.hu. The site’s team does not have it easy.

“We are the only media outlet in Pécs not controlled by political parties,” he noted. “There is one website that is close to the Hungarian Socialist Party, everybody else toes the Fidesz line. The less free the local media is, the more people flock to the remaining independent voices – we see that in the number of visitors reading our political reporting.” 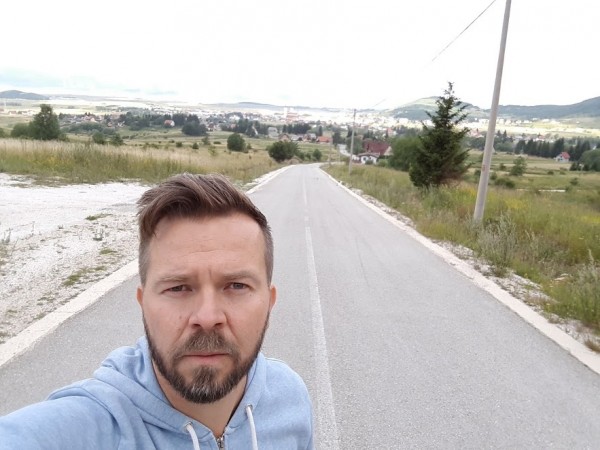 Hungarian journalist Ferenc Nimmerfroh and several colleagues were fired shortly after their newspaper was taken over by the Orbán-friendly Opimus Group in October 2016. Photo: Ferenc Nimmerfroh.

Running a profitable media business is a different matter, however.

“We had months of talks with a potential investor who backed out because of the political implications,” he recounted. “We also know of companies not advertising with us because they are afraid of local politicians.”

Nimmerfroh said he believes it is now impossible to run a profitable, independent regional newspaper in Hungary.

Government-friendly regional papers, on the other hand, can turn a handsome profit. According to Bátorfy, “these papers were always quite cheap to produce, and they always made good money for their owners”. That trend is expected to grow: with all regional papers now concentrated in the same hands, costs can be reduced, while readership is expected to remain stable, at least in the short term.

Szalay highlighted another way to maximise profits: “The papers will be full of government advertising, putting huge amounts of public money into their owners’ pockets.”

But the ultimate goal, he said, is political.