Malaysiakini should not be held liable for user comments

The International Press Institute (IPI), a global network of editors, media executives and leading journalists for press freedom, today urged the attorney general to drop the contempt proceedings against Malaysiakini and its editor-in-chief, Steven Gan, and called on the authorities to cease the ongoing  harassment and legal attacks against this prominent media outlets.

On June 15, Malaysia’s attorney general filed criminal contempt of court proceedings against Malaysiakini, a leading Malaysian news portal, and its editor-in-chief, Sven Gan. The proceedings were brought for five comments made on Malaysiakini by readers, in which the individuals had expressed their disagreement with the acquittal of previous chief ministers without trial. The first hearing in the case was held on July 2.

The attorney general argued that the comments made on the website by readers accused the domestic courts of committing wrongdoing, corruption, and failure to uphold justice and had thus compromised their integrity. Even though Malaysiakini took down the comments minutes after being warned by the police, the Federal Court of Malaysia dismissed their application to set aside the order, and the hearing is scheduled for Monday, July 13th.

“If Malaysiakini is found liable for comments made by its users on its website, this will have a chilling effect on the media in the country”, IPI Director of Advocacy Ravi R. Prasad said. “International standards do not support holding media outlets criminally liable for reader comments, and the site removed the comments after being warned. We urge prosecutors to drop charges against Malaysiakini and Steven Gan and stop all harassment of the outlet, which is an important independent voice in Malaysia.”

The U.N. Special Rapporteur on Freedom of Expression has stated that “no one should be held liable for content on the Internet of which they are not the author”. Online comments by Internet users are an expression of debate on the matters of public interest. Online news portals should not be considered publishers of these comments.

Malaysiakini is a highly reputed and independent news outlet, which received the IPI Free Media Pioneer award in 2001.

The use of criminal contempt proceedings to prosecute the media for the comments made by the readers and which are considered critical of the judiciary is a violation of the right to freedom of expression, protected by Article 10(1)(a) of Malaysia’s Federal Constitution, as well as by international human rights law. The Malaysian Bar and its former presidents have expressed their concerns over the substance of the charges as well as the lack of procedural guarantees of fairness in this proceeding.

IPI is also concerned about the rapid decline of press freedom in Malaysia. The previous government led by Prime Minister Mahathir Mohamad had made efforts to promote freedom by repealing the law on fake news and engaging with the journalist community to amend archaic laws.

“The present government appears to be increasingly intolerant of criticism and reversing the positive developments achieved”, Prasad said. “The Malaysian government should refrain from harassment of Malaysiakini and other media organizations and continue to undertake legislative reform of domestic media law in order to bring it in line with the State’s freedom of expression obligations.” 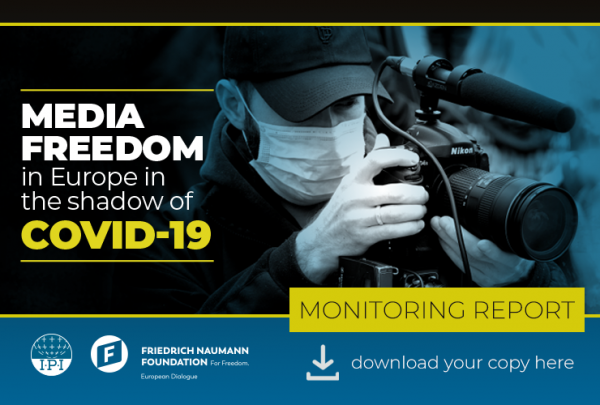 Report: Media Freedom in Europe in the Shadow of COVID-19