The latest charge together with an arrest warrant were issued against Ressa, the founder of news portal Rappler and a member of IPI’s Executive Board, and reporter Rambo Talabong on January 11. The arrest was filed in response to an investigative story about an alleged corruption scheme at a private Philippine college. The story alleged that students had paid 20.000 PHP (approx. € 350) to pass their thesis subject.

Talabong, who wrote the story, said he spent weeks researching the story to make sure it is accurate and repeatedly reached out to the school to seek their side of the story, however without response. In a statement, Rappler pointed to the “rigorous process that we went through before publishing” the article and reiterated its call for decriminalization of libel and cyber libel.

”The continued abuse of cyber libel laws to clamp down on investigative journalism in the Philippines and silence Maria Ressa and Rappler is unacceptable”, IPI Executive Director Barbara Trionfi said. ”The IPI community stands behind IPI Board Member Maria Ressa, one of the world most respected editors and publishers, and calls for an end to the legal harassment of Maria and Rappler’s courageous journalists.”

Trionfi added: “This case further demonstrates the ease with which The Philippines’s cyber libel law can be abused. Lawmakers should urgently repeal this law, which is not in line with international standards on freedom of expression.”

In November Ressa was charged by a court in Makati based on a complaint by businessman Wilfredo Keng. The charge was related to a tweet Ressa posted about a 2002 news story pubilshed on Philstar.com. In the first cyber libel case, which was also based on a complaint filed by Keng, a Manila regional court found Ressa and former Rappler researcher Reynold Santos Jr., guilty and sentenced them in June to a minimum of six months and one day to maximum of six years in prison. They were released on bail pending appeal. Ressa and Santos were also each ordered to pay 200,000 Philippine pesos (approximately 3,500 euros) in moral damages and 200,000 pesos in exemplary damages.

Maria Ressa and Rappler have been for years targets of Philippine President Rodrigo Duterte, who has made false allegations against the media organization and accused it of being funded by foreign agencies seeking to destabilize his government.

Speaking at IPI’s 2020 World Congress in September, Ressa described the ongoing harassment campaign against her orchestrated by the government of Presidenet Duterte, aimed at silencing independent journalism.

The #HoldTheLine Coalition, which IPI has joined together with more than 80 other press freedom groups, civil society organizations and journalism institutions to support Ressa, also condemned the new case on Thursday and called for an end to pressure on Ressa and Rappler. 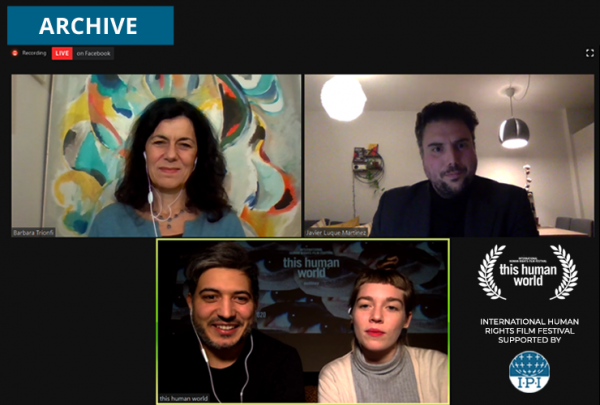 “We Hold the Line”: Documentary screening & briefing with IPI (...