Demands the charge be dropped immediately.

The International Press Institute (IPI), a global network of editors, media executives and leading journalists for press freedom, today vehemently condemned a second cyber libel case against Maria Ressa and urged that it be dropped immediately.

The founder of news portal Rappler.com and a member of IPI’s Executive Board, Ressa was charged with cyber libel by a court in Makati on November 23, based a second complaint by businessman Wilfredo Keng in February this year. The new charge relates to a tweet she posted about a 2002 story published on Philstar.com.

The prosecutors claim that Ressa’s tweet, which had a screenshot of the story published in Philstar.com, demonstrated malicious intent and was not merely an act of sharing news.

Ressa has described the charge as “ridiculous”. Meanwhile, in a motion filed in court last week to quash the case, Ressa’s legal team cited a Supreme Court decision which said that judging the simple sharing of a post as a criminal act would have a chilling effect on the freedom of expression.

“The continued legal harassment of Maria Ressa in retaliation for Rappler’s coverage represents a serious violation not only of Ressa’s rights, but also of the rights of people in the Philippines to access critical and diverse sources of news”, IPI Executive Director Barbara Trionfi said. “The IPI Executive Board, representing IPI’s global community of editors, publishers and journalists, has repeatedly condemned efforts to silence Rappler’s independent news coverage. IPI will not remain silent about the harassment of a highly respected media executive and a member of our community.”

On February 15, 2019, two days after her arrest over the first cyber libel complaint filed by Keng, Ressa had tweeted screenshots of a Philstar.com article that allegedly linked Keng to the murder of a former Manila city councillor. However, a day after Ressa posted her tweet, the publication took down the story, claiming it feared legal action.

In his complaint to the prosecutor’s office, Keng claimed that “In publishing the 2002 Philippine Star article in her Twitter account, the respondent has feloniously communicated the malicious imputations against me not only to her 350,000 Twitter followers, but to anyone who has access to the internet.”

Ressa came to know of this second complaint through a subpoena on March 6 and filed her response before the court yesterday.

In the first cyber libel case, based on the complaint filed by Keng, a Manila regional court had found Ressa and co-defendant Reynaldo Santos Jr., a former Rappler researcher, guilty and sentenced them to a minimum of six months and one day to a maximum of six years in prison. They were released on bail pending appeal. Ressa and Santos were also each ordered to pay 200,000 Philippine pesos (approximately 3,500 euros) in moral damages and 200,000 pesos in exemplary damages. 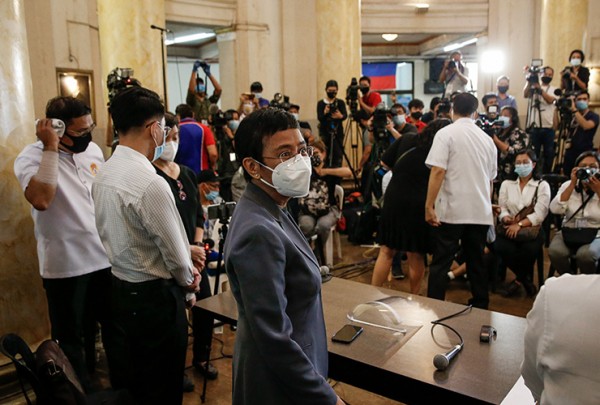