Screenshot of an intimidating message addressed to Indonesian journalist Febriana Firdaus: Look out! Floating around us (women) with fake hijabs, they are actually communist activists, LGBT lovers @febrofirdaus Don't be fooled by (her) hijab

The International Press Institute (IPI) urged Indonesia to ensure the safety of journalists after a reporter covering demonstrations related to the country’s 1965 anti-communist massacre was threatened with violence and forced into hiding.

On Thursday, Rappler.com reporter Febriana Firdaus attempted to cover the second day of a gathering in Jakarta of over 300 Islamic hardliners and retired army generals opposed to government-backed efforts to officially acknowledge the massacre. Human rights groups say that at least 500,000 people were killed during what is viewed internationally as one of the 20th century’s worst mass atrocities.

According to local media reports, the crowd began to target Firdaus as she was interviewing members of the Indonesian Catholic Students Association (PMKRI). Organisers of the gathering and supporters of the Islam Defenders Front (FPI) surrounded Firdaus and began to yell at and threaten her.

“I have your photo,” one person reportedly told her. “If you publish the story you will be arrested.”

The mob quickly grew and the situation became heated, to the point that organisers banned Firdaus from the venue.

Following the gathering, FPI supporters and other Islamic hardliners took to the Internet, sending violent threats to Firdaus on social media as part of a campaign of intimidation against her that lasted for more than 24 hours. Users labelled her a “fake Islamist” and a communist supporter, among other things. The latter term, in Indonesia, often carries the connotation of “traitor”. 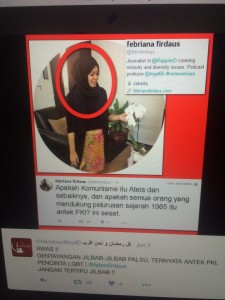 @HandoyoMay80: Look out! Floating around us (women) with fake hijabs, they are actually communist activists, LGBT lovers @febrofirdaus Don’t be fooled by (her) hijab 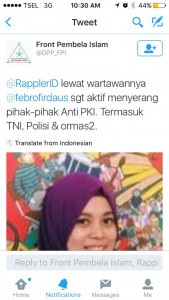 @DPP_FPI: @RapplerID via their reporter @febrofirdaus is very active attacking parties who are anti-communist, including (attacking) the military, the police and mass organizations. 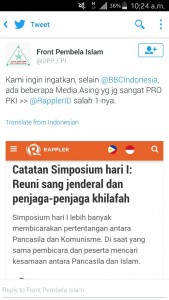 @DPP_FPI: We want to warn (you) that beside @BBCIndonesia, there are several foreign media who are really pro-communist >>@RapplerID is one of them

In light of the attacks, the Jakarta branch of the Alliance of Independent Journalists (AJI) initiated its safety protocol and transferred Firdaus to a secure location. According to close sources contacted by IPI, Firdaus, who still remains in an undisclosed location, fears for her life and the lives of her family members.

AJI Jakarta Chairman Ahmad Nurhasim condemned the attacks on Firdaus and the decision to expel her from the gathering. He indicated that the actions “violated the Press Law” and suggested that other journalists could face similar problems.

“Such actions threaten the journalistic profession in general,” he said.

Tensions related to the massacre have recently risen as Indonesian civil society organisations have led efforts to acknowledge the killings, which have long been a taboo subject in Indonesia. While the principal military leaders behind the atrocities are likely dead, the issue remains delicate. Campaigners say that many retired army generals, politicians and religious leaders with links to the purge remain among the country’s elite.

The June 1 to 2 gathering was a response to reconciliation talks held on April 18. The talks – backed by the independent National Commission on Human Rights, various civil-society organisations and the government – marked the first time that Indonesia had ever held an open, public discussion on the tragedy.

“Media freedom and the free flow of information are essential to ensuring a open and honest debate about one of Indonesia’s darker chapters,” IPI Director of Communications and Advocacy Steven M. Ellis said. “We urge authorities to take seriously all attempts to threaten or intimidate journalists, whether online or offline. No journalist should have to fear for her life simply for doing her job.”

According to IPI’s Death Watch, at least 19 journalists have lost their lives in connection with their work in Indonesia since 1997, when IPI began collecting statistics. 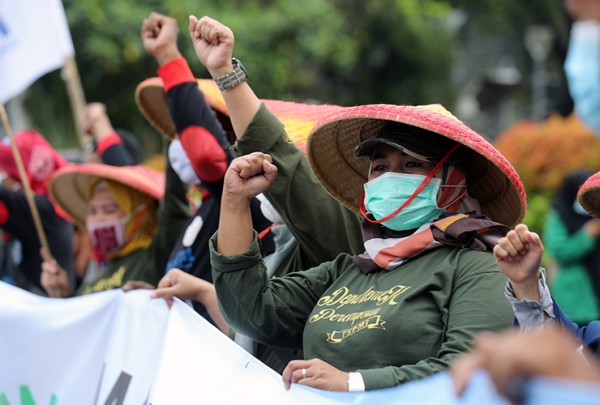