In Sri Lanka, media settle in for long march to change

One year after historic election, optimism mixes with sluggish pace of reform

Just over one year ago, Sri Lankans chose Maithripala Sirisena to be their next president, in a surprise rejection of incumbent leader Mahinda Rajapaksa, the man who had brought the country’s long-running civil war to a close. It was a historic result that triggered a wave of optimism among free expression defenders – a sentiment that, despite multiple challenges and setbacks, remains today.

For the Sri Lankan media, the election of Sirisena brought with it the potential for significant positive change. Press freedom was widely seen to have suffered catastrophically under Rajapaksa, whose tenure became increasingly mired in allegations of war crimes and corruption. Journalists frequently faced violence and exile, and impunity for crimes against the press became, by all accounts, a tragic norm.

The Sirisena administration’s programme for its first 100 days in office proposed to tackle some of the island’s most trenchant press freedom issues, including impunity, lack of access to information and the abuse of state media. The programme promised “immediate and long-term measures … to safeguard the independence of media personnel and institutions”, and vowed that the “right of freedom of thought and expression will be strengthened”. Government officials repeated those aims during a solidarity mission to Sri Lanka last February that included representatives from the International Press Institute (IPI), the International Federation of Journalists (IFJ) and IFEX.

Perhaps no one could have realistically expected the new government to transform the dreadful situation for journalists in just 100 days. But after one year, a progress evaluation is in order.

In general, Sri Lanka journalists and civil society representatives told IPI that the sense of optimism that marked Sirisena’s assumption of the presidency remains.

“The government still seems to be committed to having a free media,” Kumar Lopez, CEO of the Sri Lanka Press Institute (SLPI), a body founded by various industry associations that promotes self-regulation and responsible media, said. “We are able to take on sensitive advocacy issues that we could not take earlier. We are able to do training such as investigative journalism, social media, etc., which were very much curtailed and monitored in the previous regime.”

Dilrukshi Handunnetti, senior associate editor at the Sunday Observer, agreed that “there is a general sense of optimism”, but added: “While the general climate is good, much needs to be done still. Even if the administration is new and inclusive, from practical experience, I can see there are a lot of journalists who practice self-censorship out of sheer habit.”

In terms of specific policy, the Sirisena government remains on the cusp of a significant, if long-delayed achievement: the passage of a right-to-information bill. Although officials had assured IPI and its partners that a bill would be passed within the first 100-day window, a draft was not approved by Cabinet until Dec. 2. If the measure is ultimately passed, it may have been worth the wait. Expert analyses have suggested that the bill would result in one of the world’s strongest freedom-of-information laws. Among other things, the bill proposes a “strong and independent information commission” and a “broad public interest test” for ruling on the accessibility of information.

The bill is expected to be presented in Parliament shortly, where observers expect it to pass handily.

Progress with regards to impunity for crimes against journalists has been less smooth. Police have detained over a dozen suspects in connection with the abduction and presumed murder of cartoonist Prageeth Eknaligoda in January 2010. The fact that a number of those detained have connections to military and military intelligence indicates that the investigation is serious, Udaya Kalupathirana, director of INFORM Human Rights Documentation Centre and a member of the executive committee of the Free Media Movement (FMM), said.

“Things are moving better than in the past,” Kalupathirana noted, referring specifically to the Eknaligoda case. But he added that a number of hurdles remain. Some Buddhist nationalists, alleging that the cartoonist supported Tamil rebels during the civil war, have protested in front of courts and taken to social media to discourage the investigation. The protests have on occasion turned ugly: Last week, a judge ordered the arrest of Galagoda Aththe Gnanasara, a monk and secretary general of the Buddhist nationalist organisation Bodu Bala Sena, on contempt and obstruction charges after Gnanasara interrupted court proceedings in the Eknaligoda case. Gnanasara reportedly delivered an inflammatory diatribe in which he, among other things, called government lawyers “eunuchs” and told the cartoonist’s wife, Sandya, that she should “go and beg in the streets”.

Moreover, Sri Lanka’s sluggish legal system itself remains an ever-looming impediment. “In general, the court process in Sri Lanka is time consuming, and some legal cases might take decades of time before judgment,” Kalupathirana pointed out.

Sri Lankan civil society continues to pressure the government on the issue of impunity. Last month, the FMM organised its annual “Black January” vigil to commemorate the lives of the country’s murdered journalists and to demand a presidential commission to investigate impunity – something IPI and its international partners have called for as well. But Kalupathirana assessed the government’s response to such efforts as “minimal” so far. “The government seems reluctant to take steps into investigating or hurrying up the investigations of killings of journalists,” he said.

Indeed, there have been no advances into the numerous other cases of journalist killings in Sri Lanka, including the 2009 murder of Sunday Leader editor Lasantha Wickrematunge, an IPI World Press Freedom Hero. During last February’s mission, Justice Minister Wijeyadasa Rajapakse said the country’s police inspector general had already been requested to carry out thorough investigations into all killings of journalists and attacks on media houses, with priority being given to the Wickrematunge and Eknaligoda cases.

But the Sunday Observer last month reported that the Wickrematunge investigation was “at a virtual standstill” with “police unable to locate any definite clues”, let alone make any arrests. TheObserver quoted police and government officials as vowing to continue the investigation, even as public scepticism continues to grow.

Handunetti underscored the dangers of the government’s failure to send a signal that violence against the media would be punished. “The lurking fear is still a reality for journalists from the former conflict zones, because perpetrators still roam free,” she said. “Until and unless concrete action is taken… against wrongdoers, there is a suspicion of motives and complicity of the current administration as well.”

Alarm bells were set off in July 2015 when President Sirisena announced the reactivation of the much-reviled Sri Lanka Press Council, a statutory regulatory body with expansive powers, including the ability to fine or imprison offenders. The decision caught local and international press freedom groups by surprise, many of whom had expected Sirisena to abolish the Council, which had last been revived in 2009 under the Rajapaksa government after lying dormant for years.

Journalists and press freedom groups in Sri Lanka have argued that statutory content regulation is unnecessary and dangerous, particularly given the abuses of the past. In a statement, the SLPI and its constituent partners – which include the Editors’ Guild of Sri Lanka, Sri Lanka Working Journalists Association and the FMM – condemned the move. The group suggested that Sri Lanka’s industry self-regulatory body, the Press Complaints Commission of Sri Lanka (PCCSL), which the statement said enjoyed broad support and had handled over 1,500 complaints from the public since its formation in 2003, was capable of monitoring and supporting responsible journalism in the country on its own.

Officials are said to believe that the PCCSL and the Press Council could potentially coexist, a view not shared by civil society. “We are concerned, but there haven’t been any cases filed by any person [at the Press Council], so I think we have to wait and see,” Udara Hemachandra, FMM’s coordinator, said.

Lopez, SLPI’s CEO, suggested that the government “may not repeal the Press Council, as it may continue to have it as a defunct unit, which can always be used to activate and impose controls on the media.” But, he added: “we are engaging the government and there is a strong need to do further advocacy on this”.

During IPI’s visit to Sri Lanka in February 2015, government ministers offered assurances that the editorial independence of state-owned print and broadcast media would be respected. IPI and its partners strongly welcomed those assurances, given the state media’s ignominious history of partisanship. An analysis by Transparency International Sri Lanka found that during the January 2015 presidential vote, state media “tried to vilify, dishonour and destroy” the image of Sirisena, the – eventually successful – opposition candidate, and showed “callous disregard for accepted journalistic norms and practices”.

It is clear that soft reforms have already taken place. Journalists, including some working for state media, say that balance and editorial independence have increased tangibly in comparison to previous years. The company that runs state print outlets, Associated Newspapers of Ceylon (ANCL), has brought on several respected editors who are also veterans of the fight for press freedom in Sri Lanka.

But structural changes, including the privatisation of ANCL and the transformation of Sri Lanka’s state-owned radio and television stations into public service broadcasters, have not taken place. As a result, independence and political balance remain far from guaranteed. Under current rules, for instance, the government directly appoints the members of the governing boards of state-owned broadcasters and may also dismiss them at will.

Happily, public broadcasting is just one of numerous media policy issues currently being examined by the National Secretariat for Media Reform, a partnership involving the Media Ministry, civil society and Sri Lankan universities. In November, the Secretariat released a 133-page draft assessment of the country’s media landscape that includes sweeping legal and policy recommendations with an aim to strengthening media freedom, independence and pluralism.

It’s a laundry list of ambitious goals that, “if implemented, would create an incredibly positive legal framework for media pluralism and free expression in Sri Lanka,” Dr. Asanga Welikala, associate director of the Edinburgh Centre for Constitutional Law at Edinburgh Law School, who is among a number of experts that have been asked to peer-review the document, said.

A final draft of the document is expected to be published later this month and officially submitted to the government as a road map in May of this year. Whether the government will follow the Secretariat’s recommendations, or do so with the necessary alacrity, remains to be seen.

Such ambitious projects notwithstanding, there’s a sense that, one year after IPI’s visit to Sri Lanka, bitter reality has set in. The enthusiasm and hope that greeted Sirisena’s election haven’t gone away. But they are being forced to coexist with the acknowledgement that change, if it is to come, will demand patience and will need to overcome Sri Lanka’s fractured politics, ethnic divisions and agonisingly slow institutions.

“We are still optimistic to some extent, though certain expectations have been reduced,” Kalupathirana explained. Yet he also suggested that the slight opening provided thus far in the post-Rajapaksa era could itself be harnessed to demand and cement further reform, commenting: “Space for dissent and criticism has improved in comparison to the previous regime, and media organisations are using that space to voice the rights of journalists.” 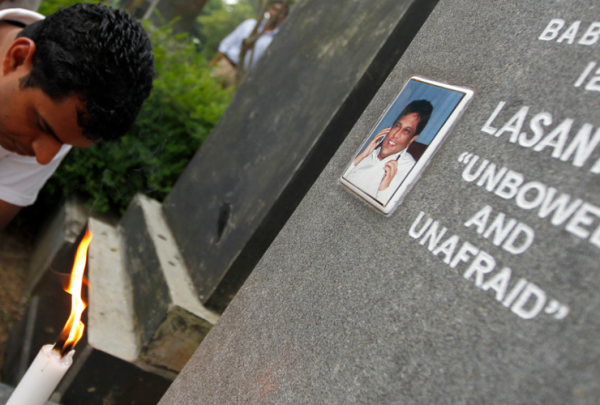