A colleague of The Sunday Leader newspaper former Editor in Chief Lasantha Wickrematunge bows his head in front of his grave during his 2nd death anniversary in Colombo January 8, 2011. REUTERS/Dinuka Liyanawatte

The International Press Institute (IPI), a global network of editors, media executives and leading journalists for press freedom, today renewed its call on the government of Sri Lanka to investigate the murder of IPI World Press Freedom Hero and former Sunday Leader editor Lasantha Wickrematunge and bring those responsible to justice.

Wickrematunge was killed near the Sri Lankan capital of Colombo by unidentified assailants riding on motorcycles on the morning of January 8, 2009 – 11 years ago today. He died of his wounds a few hours later.

“It has been 11 years since Lasantha Wickrematunge was assassinated, yet virtually no progress has been made in securing justice”, IPI Director of Advocacy Ravi R. Prasad said. “The Sri Lankan government has failed to investigate the murder of one of the leading journalists of his time, who exposed corruption in the highest echelons of the government. The government should expedite the investigation and hold the killers and those who masterminded the murder to account.”

Wickrematunge was one of Sri Lanka’s most persistent and authoritative critics of both the government and the militant Tamil Tigers (LTTE). Less than a week before he was killed, Wickrematunge had criticized then-President Mahinda Rajapaksa for allegedly using the war against the LTTE as a tool for achieving electoral success.

Following the murder, the Criminal Investigation Department arrested a suspect, who mysteriously died in police custody. In 2016 the suspect’s body was exhumed for medical examination on the request of the investigators. A news report said that though he was claimed to have been shot dead, his body had stab wounds.

Wickrematunge co-founded the Sunday Leader with his brother Lal Wickrematunge in 1994. Under his editorship, the newspaper was highly critical of Rajapaksa and his government and accused the army of human rights abuses against the ethnic minority Tamils during the country’s civil war. As a result, the paper and its journalists were subject to threats, censorship orders, criminal defamation lawsuits, armed raids and arson attacks. Wickrematunge himself was twice badly beaten. He had received anonymous death threats and his home was sprayed with machine gun fire.

Wickrematunge had predicted his own death in an editorial published after his murder, in which he wrote: “When finally I am killed, it will be the government that kills me.” Wickrematunge also predicted that an investigation into his murder would languish. He wrote: “In the wake of my death I know you [Sri Lankan President Rajapaksa] will make all the usual sanctimonious noises and call upon the police to hold a swift and thorough inquiry”, he wrote. “But like all the inquiries you have ordered in the past, nothing will come of this one, too.” 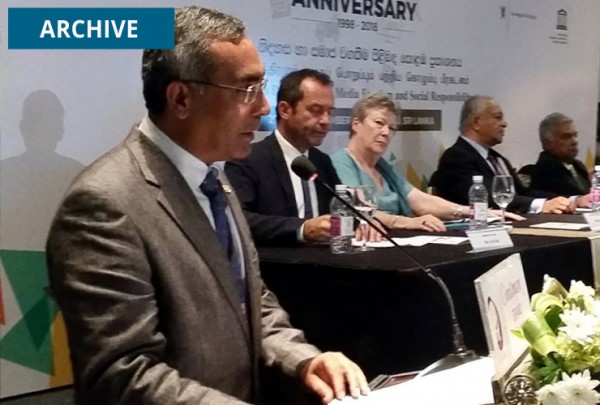