How IPI members are facing the COVID-19 challenge: Taiwan

To talk about the COVID-19 epidemic and news coverage in Taiwan, it is important to understand the relationship between mainland China and Taiwan first. During the Chinese New Year, many Taiwanese who work, live and study in mainland China come back to Taiwan for the most important family event of the year, the New Year’s Eve dinner on January 24th. On that day, it was reported that about 2,000 Taiwanese were in Wuhan, Hubei province who wanted to get on the flights to Taiwan. A travel ban was ordered in Wuhan the day before. Based on the number of the people who wanted to travel to Taiwan for the holiday, the challenge for Taiwan to contain the virus is understandably overwhelming.

It has been 17 years since Severe Acute Respiratory Syndrome (SARS) hit Taiwan, but people and media outlets have a vivid memory of the crisis. After SARS, Taiwan was allowed into the World Health Assembly (WHA) in 2009 as an observer which ended in 2016. The United Daily News (UDN) has not sent journalists to cover WHA since.

At the end of December 2019, The UDN broke the news that a novel pneumonia case could develop into an epidemic. The last day of 2019, all airports in Taiwan introduced checks flights coming from Wuhan.

The crowded events for the New Year’s Eve celebrations, the final rallies for the presidential election held on January 11th, and the coming Chinese New Year Holidays posed serious threat of a possible outbreak.

On the January 20th, Taiwan activated the Central Epidemic Command Center (CECC), and the director-general for the Taiwan Centers for Disease Control (Taiwan CDC) Chou Chih-haw was appointed as the commander. The next day, the first COVID-19 case was diagnosed in Taiwan. The Chinese New Year holidays started on January 23rd lasting for 7 days this year. The CECC then raised the outbreak level to 2, and the Minister of Health and Welfare Chen Shih-Chung took over the command. On that day, those who lived in Wuhan were prohibited from boarding flights to Taiwan, and all travelers were asked about their travel history to Wuhan.

UDN Group Has Most Members with the Experience of Covering SARS

The newsroom of the United Daily News Group (UDN Group) has most journalists who covered the SARS epidemic in 2003 in Taiwan. The Health section of the newsroom with more than a handful of seasoned journalists was recognized for their award-winning reporting on SARS. The team was the whistleblower for Taiwan during the SARS epidemic. They quickly organized their resources to cover the unfolding COVID-19 spread.  More and more news broke during the holidays. The team stayed on duty and provided accurate and accountable stories. The newsroom interviewed several key officials and medical professionals, who worked on SARS, to provide readers different perspectives. The Health Section reviewed the SARS experience in the internal meetings with the newsroom and started to advise the management with the possible outcomes.

The UDN Group held its first disease control meeting on January 30th, the first working day after the holidays. It delegated tasks to different teams, and the Safety and Sanitary Office and the Editorial Admin Desk coordinated resources to supply surgical masks for those whose assignments were to cover hospitals, airports, ports, customs, and other high-risk locations.

Each reporter on these beats got a mask every day. The reporters especially on these assignments were advised not to enter the office building. Everyone who entered the office had to measure and record their temperature. The disease control procedures implemented during the SARS epidemic were reviewed and updated in order to fit current situation.

By mid-February, all departments had finalized their protocols, and started to prepare all possible measures to meet the protocols. On March 31st, thermal imaging was installed at the only designated entrance of the building.

All adjustments for the disease control including office reorganization, offsite backup, work-from-home computer setups, layout and printing rerouting, and remote working management systems were adopted. All members were encouraged to hold meeting on video conferencing.

Starting from the second week of March, all major meetings including the daily editorial board meeting, and executive meetings were held on Google Hangouts Meet. Starting March 23rd, most teams were put on pressure test. In the last week of March, the newsroom confirmed that all functions could be run as usual with more than 90% of staff away from the office.

The Adjustment and Risk Management While Facing COVID-19

Much of the daily routine could be devastated by the possible virus hit. The offsite backup plans must be in place especially for the print newspapers (UDN Group currently prints 4 daily papers). From the assessments of working-From-Home, we found that most of the editors for the print papers did not have appropriate computers and applications. Our engineers visited their homes to set up the dynamic Domain Name System (DDNS) for them to work remotely. These procedures take time to set up, to test, and to train their work.

The tech team reviewed possible scenarios, and came up with possible solutions, and needed hardware in February. It finished the setup for the executive editors in late March. The editor-in-chief of United Daily News and und.com Fan Ling-Jia tried to work-from-home for the first time on March 26th. One thing that stood out for him was that at the office, he always has a real-size final proof, but at home, he could only exam the final proof of the entire bundle of the newspaper on a small monitor. It still takes time to get used to it. The video conferencing is also something new for the newsroom. It might take two to three weeks to have everyone feel comfortable using.

After the pressure test, UDN’s newsroom decided to execute the crisis management in two phases. First phase, Offsite Backup within the office: all departments have been divided into two groups to work in separate parts of the building to avoid any member causing the entire function to fail. Second phase, Offsite Backup with most members working from home: if any part of the building was shut down, all members of the team would work from home with minimum staff to keep the printing press running. At this point, UDN holds the social responsibility as a media to deliver news and newspaper to readers, and we will do everything we can to hold the page count of our daily papers especially providing all information about the epidemic.

The UDN New Media Center created five special digital feature stories for the COVID-19 so far. The data and analysis were presented with infographics, and they were updated constantly with new developments. “The COVID-19 Cases in Taiwan Infographics” was launched on February 24th, and by March 28th, it had more than 8.5 million page-views. This page had a short description of each case provided by the CECC with interactive features to show the links between different cases and whether the case was connected with an existing one, from outside of the country, or possible community spread.

Another page was dedicated to the global spread: “Interactive Map: COVID-19 Global Pandemic Update.” It has more than 340,000 page-views. Our social media posts are extremely popular amongst users. The coverage of daily CECC press conference often has more than 100,000 views. It shows that there is a strong demand from the public for information on Covid-19.

The digital feature “The COVID-19 Cases in Taiwan Infographics” becomes a daily check-point for record-breaking users. The information and charts were simultaneously updated with CECC, and the team found that “it has become users’ habit to check the page after each press conference.” The New Media Center usually experiences over 10,000 users on the page at the same time around the daily updates, and once it hit the record of having more than 40,000 users in 30 minutes. The team also takes the comments sections seriously. They optimize the user experience of the pages accordingly as “a service tool for the users to participate in the story together.”

The COVID-19 and Challenges on Reporting

A review of “the Communicable Disease Control Act” came after SARS in 2003. Few amendments were added over the years to control information gathering and reporting for epidemics. Once the CECC was activated, information about all infected cases such as their identity, travel history, and the disease progression came under the protection of the act. The journalists were prohibited from publishing them. Fan Ling-Jia believes “that the government gestures and policies are subjects for discussion. The media are accountable to go after the government for the real facts. The government supervision and the Act is walking on the fine line of information controlling.”

The CECC live-streams its daily press conference on Facebook. The public can access the information directly and openly, and as a result the officials do not need news media to convey information as before. However, Fan Ling-Jia suggests that the live stream of the press event does not necessary help the facts to come through.

At the daily briefings, the reporters are restricted from ask questions about the cases as any information regarding the infected cases are not supposed to be publicized. Many journalists feel that they are not able to question the officials thoroughly during the sessions. 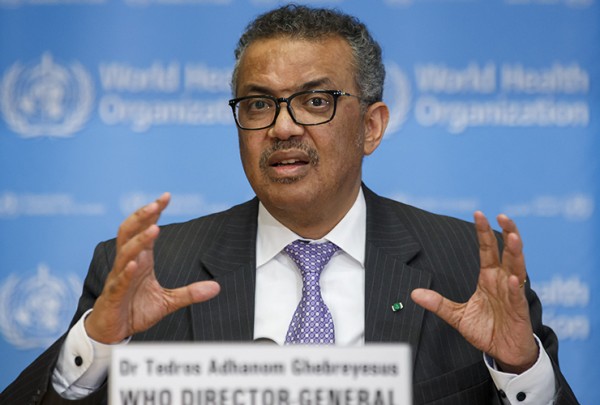 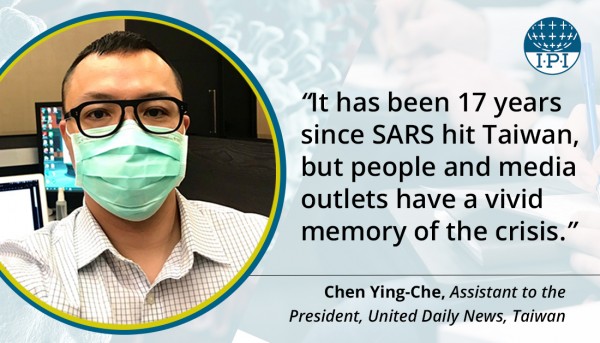 How IPI members are facing the COVID-19 challenge: Taiwan

Chen Ying-Che, Assistant to the President, United Daily News, Taiwan. To talk about the …
Read More