Eritrean refugees display banners and placards with pictures of Eritrean President Isaias Afwerki during a demonstration in support of a U.N. human rights report accusing Eritrean leaders of crimes against humanity in front of the Africa Union headquarters in Ethiopia's capital Addis Ababa on June 23, 2016. REUTERS/Tiksa Negeri

Following Eritrea’s announcement this week that Swedish-Eritrean journalist Dawit Isaak is alive after nearly 15 years behind bars without trial or official charge, the International Press Institute (IPI) renewed its call for the release of Isaak and all journalists detained there in connection with their work.

Eritrean Foreign Affairs Minister Osman Saleh made the announcement on Monday, but added that the journalist will only be sentenced when the government decides it is ready to do so.

Eritrea detained Isaak in the aftermath of the Sept. 11, 2001 attacks in the United States on allegations of support for terrorism amid a general crackdown on dissent in Eritrea ahead of elections that were later cancelled without explanation. Many journalists detained during the crackdown and in subsequent years remain in prison with little or no word as to their fate.

IPI Director of Advocacy and Communications Steven M. Ellis welcomed Monday’s announcement, but he called on Eritrea’s government to prove its claim by releasing Isaak immediately.

“Dawit Isaak and his colleagues have spent far too long behind bars on unknown charges that they were never even allowed to challenge, and many of them are reported to have died in the face of indefinite detention amid appalling conditions,” Ellis said. “We are pleased to hear reports indicating a gradual opening of the country, at least to foreign reporters. But the government needs to rectify the ongoing injustice against Isaak and other journalists by freeing them immediately, and it needs to allow all journalists in the country to report news freely and without interference.”

Swedish journalist Martin Schibbye – who was himself held for 438 days in neighbouring Ethiopia and who recently returned from a reporting trip to Eritrea – said he viewed the announcement as a positive sign in light of other recent developments in the country.

In addition to Schibbye, reporters from the British Broadcasting Company (BBC) and France 24 have been allowed to enter the country on visas this year. Eritrea has been called “Africa’s North Korea”, and allowing more journalists in could broaden the narrative coming from the country and help it lose this unwelcome title, Schibbye said.

He also noted that the announcement on Isaak came on the heels of the release of a U.N. Commission of Inquiry on Human Rights in Eritrea report earlier this month, one of the harshest assessments the country has received in recent years. Schibbye said that the announcement that Isaak is alive might be a move to draw attention away from the damaging report as the country attempts to improve its image and keep younger generations from leaving.

Relations between Eritrea and the EU have also improved in recent years, Schibbye observed, with the latter recently approving a €200 million aid package over the next four years intended to stimulate Eritrea’s economy.

Schibbye said he was hopeful for progress in Isaak’s case, but that it remained to be seen how the matter would play out. Eritrea’s government has denied requests by Schibbye and others to meet with Isaak in prison, and it has yet to announce when he will be officially tried or when he might be released. Schibbye also said that while Swedes were glad to hear the claim that Isaak is alive and being treated well, he expected his country would not rest and would continue to devote time and resources to bringing Isaak home safely.

Isaak was born in Eritrea in 1964 and fled the country in 1987 amid conflict as the country sought independence from Ethiopia. He became a Swedish citizen in 1992, but returned to Eritrea after the country gained independence the following year. In 1997, he and several other journalists founded Eritrea’s first independent newspaper, Setit.

After a group opposing the policies of President Isaias Afewerki, who has held power since 1993, issued a May 2001 open letter criticising measures he had taken as illegal, Eritrean authorities in September 2001 shut down all independent press outlets and arrested some 11 journalists, including Isaak. Eritrean authorities have issued no official confirmation of the accusations on which Isaak and the other journalists are being held, but Afewerki has publicly referred to them as “spies”.

Isaak was allowed to leave prison for a few days in 2005 for medical reasons and he made contact with his family, but there has been no word from him since then. Afewerki, responding to pressure from press organisations and the Swedish government to free Isaak, said in 2009: “We will not have any trial and we will not release him. We know how to handle his kind.” Isaak’s lawyers filed a habeas corpus petition with the High Court of Eritrea in 2011 that was ignored.

Ten years after Isaak was detained, the World Association of Newspapers and News Publishers (WAN-IFRA) awarded him its Golden Pen of Freedom for his courageous work in building a free press in Eritrea. Isaak has also been honoured with Reporters without Borders (RSF)’s Freedom of the Press Prize, the Swedish National Press Club’s Anna Politkovskaya Award, Swedish PEN’s Tucholsky Prize and the Norwegian Authors Union’s Freedom of Expression Prize.

Eritrea is consistently rated as one of the worst countries in the world in terms of press freedom and one of the leading jailers of journalists. There is currently no independent press and media outlets are run by the Eritrean Ministry of Information. Access to the Internet is extremely limited and heavily monitored. 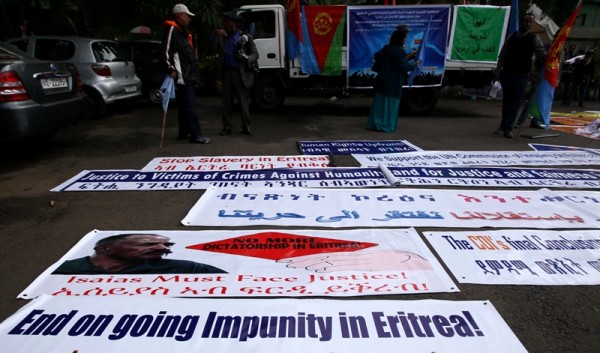