WPFD: Corruption reporting a leading cause of journalist killings in past 12 months

A demonstrator carries a photo of assassinated anti-corruption journalist Daphne Caruana Galizia as others sing the national anthem at the end of a protest against government corruption revealed by the Daphne Project, in Valletta, Malta April 29, 2018. REUTERS/Darrin Zammit Lupi

On February 22 this year, police found the bodies of Ján Kuciak, a reporter with the news website Aktuality.sk, and his girlfriend at his home in Slovakia. Kuciak had been investigating corruption in government; his reporting exposing links between an Italian crime mafia and some members of the Slovak government was published after his death. The killing led to the resignation of Slovak Prime Minister Robert Fico.

In the past year, 88 journalists, including six women, were killed around the world. Of these, as many as 46 were killed in targeted attacks, in most cases because they were investigating and exposing corruption. 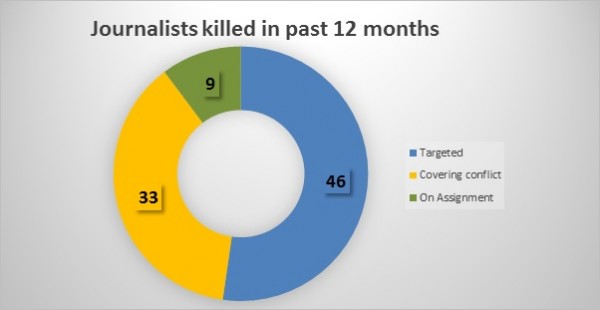 In the first four months of 2018 alone, 33 journalists, including a female journalist in El Salvador, were killed, making it an average of almost eight deaths a month. In the last eight months of 2017, as many as 55 journalists – amongst them five women – died, mostly as a result of targeted attacks.

The International Press Institute (IPI), a global network of editors, journalists and media executives, has tallied journalists deliberately targeted because of their profession and those who lost their lives while on assignment since 1997. According to IPI’s Death Watch project, as many as 1,801 journalists have died in the line of duty since 1997. The bloodiest year of the past two decades was 2012, when 133 journalists lost their lives. A year later, 121 were killed.

An analysis of the data of the last 12 months indicates that the pace of investigation into most cases of targeted killings has been slow and only a few suspects have been arrested or charged for these murders. Prominent amongst these killings are those of Kuciak in Slovakia; Daphne Caruana Galizia, who was killed in a car bomb explosion in Malta in October 2017; Gauri Lankesh, who was shot dead in September outside her home in India; and Javier Valdez Cárdenas, a well-known Mexican investigative journalist gunned down last May.

While the killings in Europe have attracted global condemnation and growing demands for the arrest of those responsible, there are dozens of cases around the world that have escaped international attention.

Latin America has emerged as one of the largest killing fields, where journalists covering drug trafficking and political corruption are particularly vulnerable. With 12 journalists killed in as many months, Mexico has become the deadliest place in the world to work in the media.

While journalists frequently lay down their lives attempting to bring facts to light and exposing nefarious practices, there are many others who die in the line of duty trying to report on armed conflicts – a majority of such deaths have recently occurred in Syria, Iraq and Afghanistan. Last month, two journalists covering a protest in Gaza were killed by Israeli snipers.

“The killing of a journalist remains the most brutal and effective way of silencing the news”, IPI Executive Director Barbara Trionfi said today on the occasion of World Press Freedom Day 2018. “People have a right to know what is happening around them and journalists – whether covering corruption or reporting from conflict zones – shed light on that information. The Death Watch tally over the past year represents a staggering loss not only for the victims’ family, friends, and colleagues, but also for democracy itself.”

“Unless governments take firm action and demonstrate that there will be no impunity, journalists will continue to be targets of threats, torture and assassination’’, Trionfi said, underscoring the need for increased protection for journalists.