On March 3, journalists and editors from Slidstvo.Info, a Ukrainian member of the Organized Crime and Corruption Reporting Project (OCCRP), learnt their platform was being investigated by the Ministry of Internal Affairs as part of a criminal espionage probe.

The basis for the investigation are Freedom of Information (FOI) requests sent by the outlet in December 2019 to 14 different current and former Ukrainian politicians asking for details about the meetings between the U.S. and Ukrainian officials.

Among those contacted was MP Oleksandr Dubinsky, a deputy in Ukraine’s parliament, who in January alleged during a press conference the FOI request was proof that Slidstvo journalists were involved in illegally spying on former U.S. Ambassador to Ukraine Marie Yovanovitch.

After Dubinsky filed a criminal complaint, last week it was announced that the Ministry of Internal Affairs had accepted his material as part of an ongoing, wider police probe into alleged U.S. surveillance of its own embassy officials in Kiev.

Although the investigation has been launched, Slidstvo has not been officially contacted by the Ministry, leaving staff in an uncertain position. The complaint involves alleged violation of Article 163 of Ukraine’s criminal code, which carries a maximum sentence of seven years.

Anna Babinets, editor-in-chief of Slidstvo, told IPI the pre-trial probe was baseless and threatened source protection by opening the door to police raids and the seizure of journalistic materials. “It’s about keeping us under pressure”, she said.

Babinets added she believed the inclusion of the FOI requests into the probe was retaliation for Slidstvo’s recent investigations into alleged bribery and misconduct within the Ukrainian police force, which is overseen by the interior ministry. “They don’t like the work we do and they see us as a threat”, she added.

Oliver Money-Kyrle, IPI’s Head of Europe Advocacy and Programmes, said the investigation into Slidstvo.Info was absurd and constituted a clear attack on press freedom in Ukraine.

“FOI requests are a legitimate and important part of any journalist’s work in accessing information in the public interest”, he said. “The Ministry, in accepting this complaint, is effectively saying that the act of requesting information from the government is a suspicious and potentially criminal activity. This decision is both absurd and dangerous. The Interior Ministry must immediately drop its investigations into Slidstvo and refrain from carrying out any searches of its offices.”

OCCRP co-founder and publisher Drew Sullivan also defended the organization’s local affiliate. “This is a completely unique kind of an investigation in Ukraine”, he told IPI. “The act of turning freedom of information requests into allegations of espionage is clearly political. The fact that the prosecutors accepted Dubinsky’s complaint makes no sense.”

He added that while it was not unusual for authorities in Ukraine to file criminal proceedings against journalists, the “absurdity” of the Slidstvo case was unprecedented. “Nothing could happen with this investigation for a long time or, as our concern now is, the prosecutor could raid the offices of Slidstvo.Info and seize their documents”, Sullivan added.

Slidstvo.Info carries out regular investigations into politics, crime and state bodies in Ukraine, for which it was awarded the Investigative Reporters and Editors Medal for investigative reporting in 2017.

The details of its FOI request revolved around the political crisis that broke out in Ukraine in 2019 over efforts by U.S. President Donald Trump to pressure his Ukrainian counterpart, Volodymyr Zelensky, into investigating the son of Democratic rival Joe Biden.

The FOI requests sent to officials sought information about Ukrainian officials and MPs’ meetings with Trump’s personal lawyer, Rudy Giuliani. Among the MPs mentioned was Oleksandr Dubinsky. Though none responded to the FOI, only Dubinsky filed a complaint, Babinets told IPI. Slidstvo has previously reported on Giuliani’s involvement in Ukrainian politics. 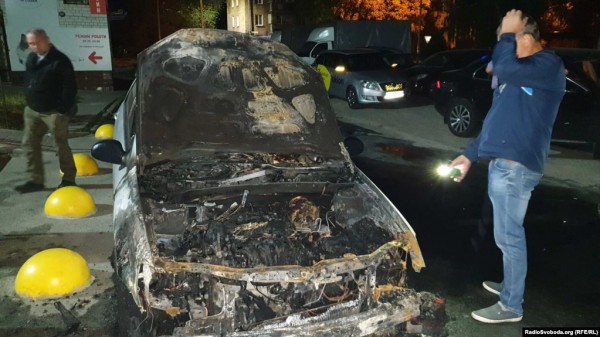