IPI calls for criminal indictment to be dropped immediately

The IPI global network today condemns the criminal charges against two Slovak journalists from independent daily Denník N involving the publication of a 2018 article related to the Ján Kuciak murder investigation. IPI urges the authorities to immediately drop the indictment.

On September 20, it was reported that the Slovak police prosecutor’s office had filed charges against Denník N investigative journalist Monika Tódová and Deputy Editor-in-Chief Konštantín Čikovsky. The charges stem from a report published in October 2018 in which the journalists revealed that former journalist-turned-spy chief Peter Tóth had monitored several journalists at the behest of Marián Kočner, the alleged mastermind in the murder, including Kuciak and Tódová herself.

Police prosecutors have now accused both journalists of revealing confidential information by disclosing Tóth’s identity as a secret witness. If found guilty, they could spend up to one year in prison.

“The indictment of Monika Tódová and Konštantín Čikovský is a deeply disturbing attack on press freedom in Slovakia”, IPI Deputy Director Scott Griffen said. “Their reporting was accurate and clearly in the public interest. It is therefore outrageous that they are now facing criminal charges for doing their job. Moreover, the timing of this complaint, years after the article was published and just weeks before the expiration of the statutory time limit, itself raises serious questions. We call for the immediate withdrawal of this indictment as well as for a review as to why it was issued in the first place. The IPI global network stands in solidarity with Denník N and its journalists, who, together with other leading Slovak media, have played a crucial role in ensuring that the truth about the murder of Ján Kuciak and Martina Kušnírová, and the circumstances behind it, comes to light.”

If found guilty, they could spend up to one year in prison. This is a worrying step backwards for #pressfreedomhttps://t.co/fcPc5N1wgb

The journalists have three days to file an appeal to the indictment, Denník N’s editor-in-chief, Matúš Kostolný, told IPI. “We will definitely do so and our lawyers are already preparing the appeal.” Kostolný said he “strongly believed” the Bratislava prosecutor would accept the appeal and drop the charges. “We published an article which was correct at the moment and is still correct. The case is connected to the murder of Ján Kuciak. The people of this country have the right to know who was behind the murder and who organized it. That was the reason we published the article three years ago, and we have the same answer today.”

The newspaper accurately reported in 2018 that Tóth had decided to cooperate with investigators when it became apparent that his role in illegally gathering information on journalists would be discovered. Just before publication, Tóth went public himself and commented about the case on Facebook. After publication, he filed criminal charges alleging that the journalists could have put him in danger. This was rejected at the time by the police prosecutor. This changed in September 2021 when the Bratislava Prosecutor’s Office ordered the police prosecutor to press charges.

Kostolný questioned the decision by the Bratislava Prosecutor’s Office, which his newspaper has reported on critically in recent months, to order an indictment three years after the allegation was first made. “I would not be surprised if this was a punishment for our critical reporting”, he said.

Kostolný told IPI that the journalists received a high level of solidarity from fellow journalists and politicians. “The prime minister talked about it, and the minister of culture, who is responsible for the media, expressed her concerns.” The Slovak general prosecutor furthermore urged the Bratislava Prosecutor’s Office to review the case.

“We didn’t do anything wrong and our colleagues understand this. We only want to report freely”, Kostolný said. “I believe that justice will be done. None of us believes that it might end up putting them in jail for a year. It is clearly a stupid case and even in Slovakia, there are normal judges, prosecutors and pollice officers, who will not allow putting my colleagues under arrest.”

The Slovak government is currently working on an updated media law to strengthen journalistic safeguards and the protection of sources, among other changes. “The biggest problem for Slovak media is however not legislation, but the hate speech public figures express towards journalists”, Kostolný said. “We all know the result of this, as we have seen by the killing of Ján Kuciak three years ago.” He continued: “Such violence starts when public figures frame journalists as enemies of this country, as if we are the reason for all problems. This cannot be solved by a law alone.” 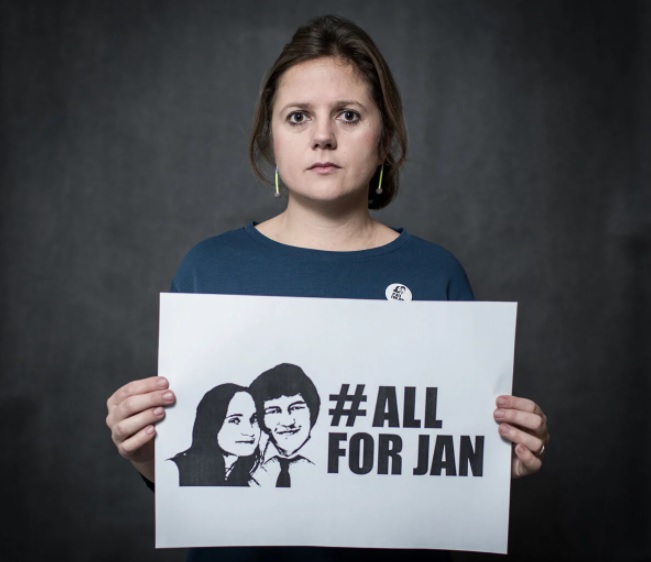