Journalist Milan Jovanovic in front of the court, Belgrade, February 23, 2021. Photo by UNS

The International Press Institute (IPI) today welcomed the guilty verdicts handed down to three defendants accused of ordering and carrying out an arson attack which destroyed the home of Serbian investigative journalist Milan Jovanović in 2018.

IPI, a global network of editors, media executives and leading journalists for press freedom, said the convictions after a marathon two-year trial were an important step forward in the fight against impunity for attacks on journalists in Serbia.

On January 23, a court in Belgrade sentenced Dragoljub Simonović, the former mayor of a Belgrade suburb and a member of the ruling Serbian Progressive Party, to four years and three months in prison for ordering the attack.

Another defendant, Vladimir Mihailović, an active police officer at the time, received four years in prison for acting as a mediator while Aleksandar Marinkovic, who prosecutors alleged threw the Molotov cocktail, was handed the same sentence in absentia.

“Today’s convictions are an important symbol of justice for Milan Jovanović and a long-awaited victory for all those fighting to end impunity for attacks on journalists in Serbia”, IPI Deputy Director Scott Griffen said. “We hope these guilty verdicts will be a turning point for media freedom in Serbia, where all too often these kinds of attacks and acts of intimidation against media go unpunished. This case shows that efficient collaboration between authorities and an effective judicial system can result in those responsible being quickly identified and prosecuted.

“The new Working Group for Security and Protection of Journalists has an opportunity to build on this momentum and ensure that similar convictions of those wishing to silence crime and corruption reporting in Serbia are replicated in the coming years. Increased reporting of threats, enhanced cooperation between journalist groups and state authorities, and rigorous investigations by law enforcement will be vital for ensuring the Working Group is effective in continuing the progress that was achieved today.”

The attack took place at around 3.30am on December 12, 2018 when two Molotov cocktails were thrown at the property. Jovanovic narrowly survived after his wife, Jela Deljanin, helped him escape through a window while he was unconscious due to smoke inhalation. Their house and car were completely destroyed and Jovanović was hospitalized with minor injuries.

Jovanović believes he was targeted for his reporting on the Zig Info portal about alleged corruption cases involving Simonovic and other local officials in the municipality of Grocka, a suburb of the capital. After the arson attack, the rented apartment in which he and his wife stayed was later burgled by unidentified assailants.

Evidence was gathered quickly and an indictment was filed in record time. Legal proceedings started in 2019 but quickly descended into a marathon, two-year trial delayed numerous times by frequent acts of obstruction by the defense lawyers. In issuing the verdict, Judge Slavko Žugić stated that the defense attorneys had obstructed the procedure, prompting Simonović and his lawyer to leave the courtroom.

Simonović had plead not guilty and changed his statement during the trial. He was charged with ordering the attack on the house as a warning to Jovanović. A warrant has been issued for Marinković, who remains a fugitive. The defendants have the right to appeal.

After the verdict was announced, Jovanović told reporters in front of the court: “”I now live and work under police protection, but I don’t know how long that protection will last. I hope that this verdict will be a harbinger of more media freedom in Serbia”.

The president of the Commission for the Investigation of the Murder of Journalists, Veran Matić, welcome the verdict and described it as “justice at work”. Before the court hearing, the Association of Journalists of Serbia (UNS) said that the verdict should send an unequivocal message that crimes against journalists will not go unpunished.

The new Working Group for the Safety of Journalists in Serbia was created by the government in late November 2020 and will be formed by representatives of the Prime Minister’s Office and several ministries, as well as representatives of the prosecution, the Konrad Adenauer Foundation in Serbia, journalists’ and media associations, and the Serbian Ombudsman. 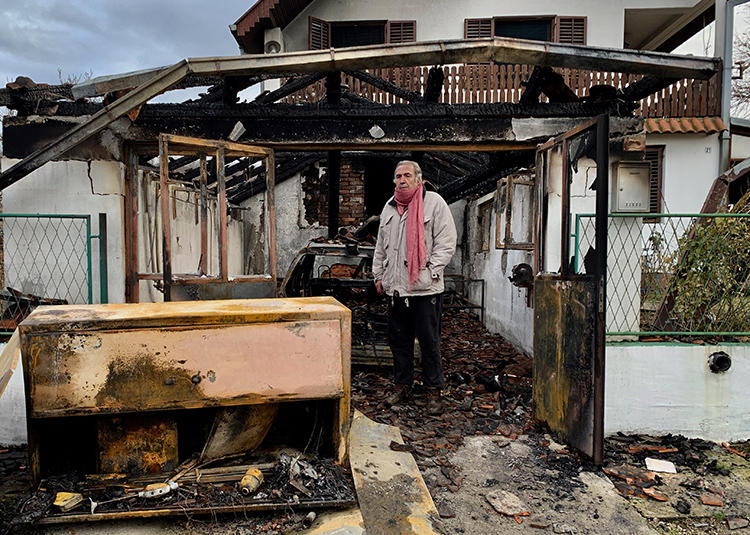 Milan Jovanović stands in the charred remnants of his home in Vrčin, Belgrade, soon after the arson attack. 2018. Photo via Cenzolovka