Resumption of fighting in Nagorno-Karabakh risks further attacks on journalists

A handout photo made available by the Armenian Foreign Ministry shows a part of a rocket shell stuck in a street in Stepanakert, Nagorno-Karabakh, 06 October 2020. EPA-EFE/AREG BALAYAN

The International Press Institute (IPI) today strongly condemned recent attacks on journalists amidst ongoing fighting between Armenia and Azerbaijan in the disputed region of Nagorno-Karabakh and called for immediate investigations into artillery shelling that has so far wounded at least five reporters.

IPI, a global network of editors, media executives and leading journalists for press freedom, also expressed dismay at the breaking of a Russian-brokered ceasefire on Sunday and warned renewed hostilities increased the risk of further attacks on the media from both sides.

Since skirmishes over the ethnic Armenian enclave inside Azerbaijan erupted again last month, at least five international and local journalists have been injured, some severely, and at least two other TV crews have been shot at or come under fire from shelling, according to various media reports.

The injuries come amidst wider internet restrictions and revocation of press credentials of foreign correspondents, which are posing severe impediments to the work of journalists documenting the most severe outbreak of fighting in the long-disputed region in decades.

“Continued and indiscriminate artillery fire on civilian areas in which journalists are reporting is breaking international law and putting the lives of foreign and local media workers at serious risk”, IPI Deputy Director Scott Griffen said. “Immediate investigations must be opened by military and political authorities in both Yerevan and Baku to determine responsibility for shelling that has injured at least five journalists over the last two weeks.

He added: “It is extremely fortunate that no journalists have been killed covering this conflict so far. However, with the latest resumption of fighting, we are seriously worried this luck may now run out. It is essential that Armenia and Azerbaijan reduce hostilities and avoid all targeting of any TV crews or vehicles with press identification to ensure that the media can work safely. Neither side should want the blood of a journalist on their hands.”

In the latest incident, on October 8, two Russian journalists were seriously injured by shelling from by Azeri forces the city of Shushi in Nagorno-Karabakh, according to Russian media reports citing Armenian communication authorities in the region.

Levon Arzanov, a correspondent for Ofitsery Rossii, a Russian state-run website focusing on military affairs, and Yuri Kotenok, chief editor of Russian news website Segodnia.ru, had been reporting from within a cathedral when it was hit by shelling.

Kotenok was badly injured and underwent surgery, while Arzanov suffered non-life threatening injuries, according to media reports. Kotenok was in a coma for several days but recovered after treatment in Armenia, RIA Novosti reported.

It comes after a French reporter and photographer working for Le Monde newspaper were hospitalized with serious injuries after being caught in artillery fire from Azerbaijan in the town of Khojavend, known locally as Martuni, on October 1.

The same shelling also injured two Armenian journalists, Sevak Vardumyan, a correspondent for the Armenian 24News and Aram Grigoryan, a camera operator for the Armenia TV channel. Other reporting crews, including one from Agence France-Presse, narrowly escaped being hit.

Days later, media workers for the Turkish state-run Anadolu Agency (AA) and TRT broadcaster, plus for the private Ihlas News Agency (IHA), were almost hit by shelling in civilian areas by the Armenian military in the Azeri city of Terter, according to reports by AA. 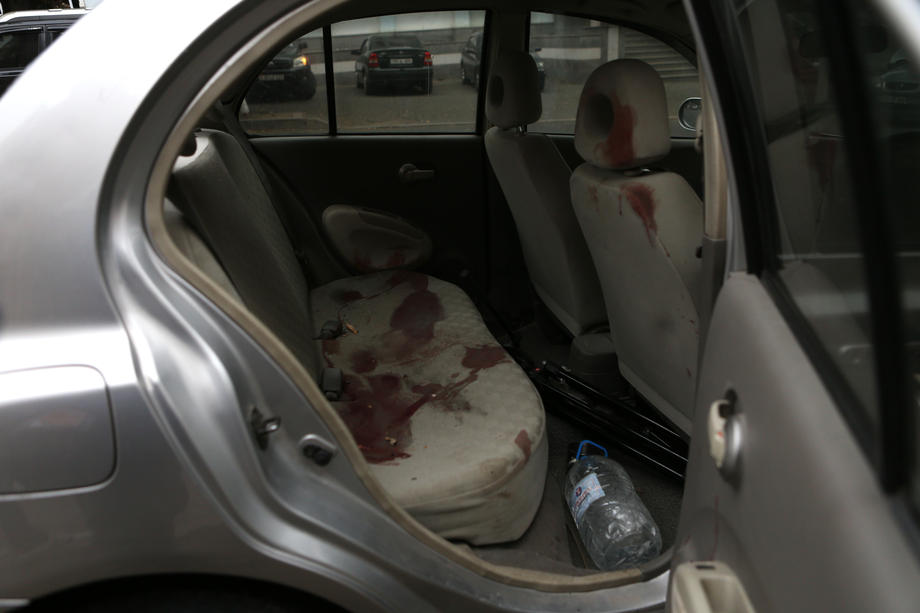 Blood stains inside the car of journalists who came under alleged Azeri shelling in the town of Martuni in the self-proclaimed Nagorno-Karabakh Republic. 01 October 2020. EPA-EFE/Hayk Baghdasaryan

Over the last two weeks, several other cases of hostilities or restrictions against journalists have been reported.

According to a statement signed by several Armenian journalist NGOs including the Yerevan Press Club, an Azerbaijani drone made threatening approaches against a group of journalists travelling on a bus in Martuni on October 1. No one was injured.

The group claimed that additional threats to journalists’ lives were reported in the city of Stepanakert on October 4 and that media workers performing their professional duties had been targeted on purpose by Azeri forces.

Similar claims have been made on the other side. According to other reports, a TV crew from the Azerbaijani public broadcaster was also shot at by the Armenian armed forces on Tuesday near Tartar, in Azerbaijan, despite the team wearing “press” IDs and the car carrying the broadcaster’s logo.

Both the Armenian and Azerbaijan Ministry of Foreign Affairs have denied deliberately targeting members of the press.

On October 8, it was also reported that the journalistic accreditation of Novaya Gazeta correspondent Ilya Azar had been revoked by the Armenian Foreign Ministry. He had previously been approved to report from Nagorno-Karabakh.

After fighting broke out on September 27, an analysis by the organization NetBlocks confirmed that widespread social media restrictions were introduced in Azerbaijan, impeding the work of journalists to report on the clashes.

The ceasefire on Sunday, October 11, failed to hold after both sides accused the other of resuming intensive shelling on predominantly civilian areas.