Today in London, a group of free expression, press freedom, and anti-corruption groups renewed calls for full justice for the murder of journalist Daphne Caruana Galizia. A courageous investigative reporter and blogger who relentlessly exposed corruption, Caruana Galizia was killed six months ago, on October 16, 2017, when a car bomb detonated as she drove away from her home in Bidnija, Malta.

Though arrests have been made and three men are set to stand trial upon conclusion of the law courts’ compilation of evidence related to the case, the London groups continue to emphasize the need for full justice in Caruana Galizia’s case – that is, for all those involved in the planning and the carrying out of the attack to be identified and prosecuted.

Approximately 80 participants gathered outside the Malta High Commission for a lunchtime vigil to remember Caruana Galizia and renew calls for full justice for her murder. They were joined by members of the Caruana Galizia family. Excerpts of Caruana Galizia’s work were read aloud, and participants held bay leaf branches in solidarity with her supporters in Malta.

The groups also held an evening event at the House of Commons, hosted and moderated by Tom Brake MP. Paul Caruana Galizia, the son of Daphne Caruana Galizia, along with Rebecca Vincent of Reporters Without Borders and Maggie Murphy of Transparency International detailed the current state of the pursuit of justice for Caruana Galizia’s murder and urged greater UK action to ensure justice in this case and address the broader cycle of violence against journalists and impunity for their attackers.

Paul Caruana Galizia addressed the packed room: “My mother was assassinated for investigating crime and corruption in Malta’s state and government. Justice won’t come from the Maltese government. The UK must act together with the wider international community against the network of crime that has taken hold of Malta and eliminated its strongest independent voice.”

The London events were part of a series of coordinated actions in cities across Europe and the United States, including Amsterdam, Berlin, Brussels, Dresden, Edinburgh, Washington DC, and Valletta.

“A full six months on, the investigation into Daphne Caruana Galizia’s murder has resulted only in the arrests of a few suspects, and no apparent attempt to identify the masterminds behind this assassination. That is not justice. We continue to call for everyone involved in the planning and carrying out of this heinous attack to be identified and prosecuted to the full extent of the law, and for concrete steps to ensure this does not happen again” said Rebecca Vincent, UK Bureau Director for Reporters Without Borders.

“Press freedom, as a core human rights value, is grounded in the safety of journalists, and justice for crimes against them. Ongoing impunity for Daphne Caruana Galizia’s murder serves to embolden the criminals behind this heinous act, deterring other journalists from vital work to expose corruption”, said Katie Morris, head of Europe and Central Asia at ARTICLE 19.

“It has been six months since assassins deprived Malta of its bravest enterprising journalist, yet the investigation into Daphne Caruana Galizia’s murder has only netted several low-level suspects in her killing thus far. Until those responsible for ordering the crime are brought to justice, impunity will continue to reign in this hallmark case, with chilling consequences for press freedom in Malta, Europe, and beyond”, said Courtney Radsch, Advocacy Director for the Committee to Protect Journalists.

“Daphne Caruana Galizia was an outstanding and courageous journalist, whose fight against corruption continues to inspire others. Her murder must not go unpunished and her family must be given justice”, said Index on Censorship chief executive Jodie Ginsberg.

“As a body representing the media industry, we are fast losing faith in the government of Malta’s intention to bring the perpetrators to justice. It is apparent that the government is lackadaisical in finding the masterminds behind the murder”, said Ravi R. Prasad, head of advocacy for the International Press Institute.

“On the six-month anniversary of the brutal assassination of our colleague Daphne Caruana Galizia, PEN is profoundly concerned with the behaviour of the Maltese authorities in relation to upholding freedom of expression in the country. In particular, we have lost faith in the independence, impartiality and effectiveness of the investigation into her assassination, which was ordered as a direct result of her investigative journalism. We are deeply disturbed by the ongoing legal harassment against her family and sources by the Prime Minister and his cabinet and the shameful behaviour of the management of Valletta 2018, the European Capital of Culture in relation to her memorial”, said President of PEN International Jennifer Clement.

“Daphne Caruana Galizia was fearless in her attempts to uncover corruption in her country, one of the most patriotic things a person can do. Journalists working to expose corruption and money laundering are vital to the anti-corruption movement and any attacks on them undermine democracy and the rule of law. The Maltese authorities failed Daphne by not providing the protection she requested. They must not fail her and her family again by allowing impunity to prevail”, said Maggie Murphy, Senior Global Advocacy Manager, Transparency International. 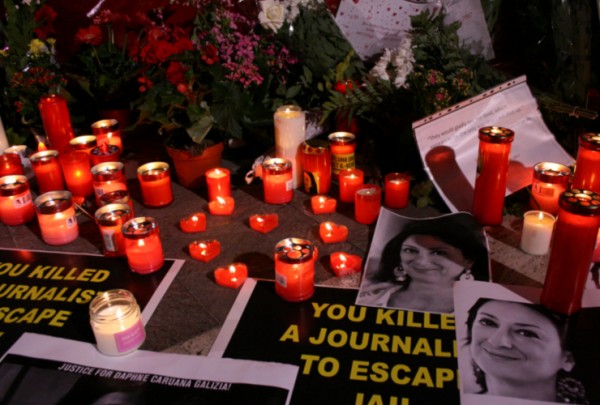