Two people with face masks walk in front of a Fidel Castro's image during Labour Day, amid measures against the COVID-19 pandemic, in Havana, Cuba, May 1, 2020. EPA-EFE/Ernesto Mastrascusa.

While the country has opened to up to greater international engagement in recent years, critical journalists are still routinely subjected to intimidation, arbitrary detentions, travel restrictions, physical attacks, threats, and raids on their homes and offices. An array of repressive tactics is used with the objective of silencing or pushing journalists into leaving the island.

Some press freedom problems plaguing the country, such as the lack of access to information, have been exacerbated by the current coronavirus pandemic, Cuban journalists say in new interviews with the International Press Institute (IPI). Independent journalists in Cuba are not permitted to access publicly held press conferences nor to impart any information other than that released by the public authorities.

Independent journalists are continuously denied access to publicly held information. Even the most trivial information is out of reach for all journalists who do not work for state media and attempt to report outside the government’s umbrella.

“Independent journalists cannot report freely in Cuba”, Reinaldo Escobar, the editor-in-chief of the independent Cuban news website 14yMedio, told IPI in an interview. “Along with the usual repressive measures, such as arbitrary detention, journalists face an invisible, and perhaps the most severe, obstacle to exercising their profession: the lack of legitimacy for obtaining information.”

“I am not even referring to the impossibility of knocking on the door of a public official, rather to the fact that even the simplest, everyday information, related for example to the quality of potatoes in the market, is almost impossible to obtain”, he said.

Often, journalists are simply not allowed to exit their homes. In November and December 2019, Escobar’s daughter Luz Escobar, who is a journalist herself, was repeatedly barred from leaving her home and threatened with detention.

While in some countries journalists have criticized restrictive questioning formats during COVID-19 press conferences, in Cuba independent journalists are not given any chance at all to question or to hold the authorities to account.

“It’s not that journalists are not invited to press conferences held by ministry of public health and the head of epidemiology. It’s that we are not even allowed to enter those conferences”, Escobar said. “Independent journalists do not have any possibility of asking questions about the current situation”.

Restricting access to information for journalist is not the only tactic used by the authorities to stifle the free flow of information. When journalists do manage to receive information, not succumb to self-censorship, and publish, their stories frequently end up being hard or impossible to access for citizens.

Many news websites, such as Escobar’s 14yMedio, are blocked in Cuba and are thus accessible only from outside the country or from within the island by using VPN – not an easy task in one of the least connected countries in the world.

“Information is expensive in this country. The prices of scarce internet access are so high that when a person affords 20 minutes of internet connection, this access is often used for communication with relatives or finding jobs rather than for reading news”, Escobar explained.

While the majority of countries worldwide have imposed travel restrictions due to the pandemic, for a number of Cuban journalists such restrictions do not represent a particular novelty.

Due to travel restrictions, some journalists like Abraham Jiménez Enoa, the founder and director of El Estornudo newspaper, have never left the island Similarly, Cubanet journalist Anay Remón, has been banned from traveling outside the island.

“Since March 2018 I am prohibited from leaving the country. This restriction could last indefinitely since the judiciary in Cuba is still completely subordinated to political power”, Remón explained in an interview with IPI.

The suppression of independent journalism in Cuba has been aided by a series of legal instruments that not only are used to give cover to the violations but that also leave victims without any protection. Repressive laws are used to criminalize journalists and sanction criticism.

“Two of the most commonly used legal tools for hindering the movement of journalists within the island are ‘desacato’ laws and the ‘usurpation of legal capacity’”, Remón explained, “The former is used to confine independent journalists in their homes on important dates, while the latter is used to pressure journalists without journalistic formation approved by the Cuban state. These journalists are prohibited from reporting for supposedly not being ‘real’ journalists.”

“Deportation has been used against independent journalists born elsewhere on the island but reporting in La Habana or those who travel within the island to report on the event”, she said.

“Lately the article 68 of the Decree-Law 370/2018 was used to arrest and fine journalists or confiscate their equipment. In such cases, journalists are accused of ‘disseminating, through public networks of data transmission, information contrary to the social interest, morals, good manners and integrity of people’”, Remón added.

“The repression is like a spiral that starts with a threat. After that they harass your family. Then you get fined, detained, sometimes with physical aggressions. Your equipment gets confiscated. You are prohibited from leaving the country. Finally, as a last resort, imprisonment without due process”, Remón said. “The main objective of these repressions is to intimidate journalists so they give up their job, but also to force them to leave the island.”

Recent developments, however, show at least that pressure on the Cuban authorities can work in some cases. José Daniel Ferrera, the country’s leading political dissident whose organisation Unión Patriótica de Cuba (UNPACU) engages in journalism, was arrested on charges of assault in October 2019 and imprisoned without due process. Ferrera was facing nine years of imprisonment but was sentenced in the beginning of April 2020 to four years and six months of house arrest.

“This is an important step forward thanks to the international pressure”, Escobar said. “The government is every day more obliged to be politically correct due to the scrutiny coming from the rest of the world.”

“I am going to turn 73 years in July. I have been working as a journalist for over 50 years now. Today press freedom in Cuba is not as bad as it was in the 1960s”, Escobar said.

The most valuable weapon to fight repression for independent journalists in Cuba is speaking out and trying to raise awareness about the violations, he suggested. “Every day we conquer more territory for our rights not because of the political will of the government but because we demand it. When the violation happens, we denounce it via social media, making it more difficult for the government to do it again.” 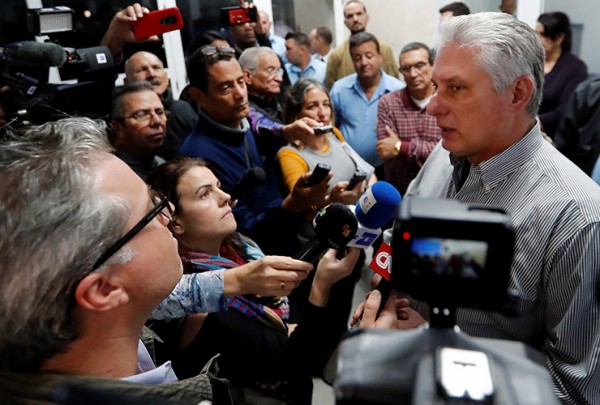