Research conducted in 45 newsrooms in 5 countries

In the context of the overall issue of harassment, the report, which is the outcome of visits to dozens of newsrooms in five European countries, focuses specifically on female journalists, who have been shown to receive different and more vicious online abuse than their male colleagues. 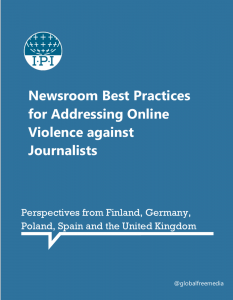 IPI conducted research in 45 newsrooms, where it carried out interviews with editors, heads of audience, social media editors and journalists. The research further included interviews with media experts from civil society and academia. In addition, a total of eight focus groups with female journalists and freelancers were held to discuss measures for preventing and countering attacks affecting those groups specifically.

Although the numerous journalists, editors, managers and other experts who contributed to this study were given the possibility to speak about the problem of online harassment in both gender-neutral and gender-specific terms, there was almost complete agreement, across all countries and news organizations visited, not only that female journalists are more often targeted in online attacks, but also that the attacks experienced by women are especially vicious and often highly sexualized.

In addition to surveying the measures adopted by newsrooms, the report offers a set of recommendations directed at media outlets, editors, journalists and states, including the following:

The research specifically examined measures implemented by newsrooms in four different areas: Pre- and post-moderation mechanisms for both on-site comments and social media posts; psychosocial support strategies; legal assistance; and, finally, coordination with social media platforms to tackle campaigns of online abuse against journalists. Building on these findings, IPI will shortly launch an online research centre for media organizations and journalists to prevent and counter online attacks that seek to intimidate and discredit the press.