This text is originally published in a monitoring report by the Media Freedom Rapid Response (MFRR) which can be download in full here. This analysis covers the first six months of 2022.

Media freedom in Europe in the first half of 2022 has been overshadowed by Russia’s devastating war of aggression in Ukraine. The conflict has taken a deadly toll on journalists, led to multiple human rights abuses against those reporting on the front lines, and posed existential challenges for the survival of independent media in Ukraine.

In addition to a global outpouring of support and solidarity with Ukraine’s journalistic community, Russia’s full-scale invasion in February 2022 has also brought into focus the need to safeguard press freedom and democratic values within the European Union.

As the war drags on and with no end to hostilities in sight, Ukrainian media continue to adapt to a challenging new economic reality while also navigating the multiple challenges posed by information warfare. MFFR began monitoring Ukraine when the invasion began in February 2022. During the reporting period Ukraine became a candidate country in June 2022. During the first six months of 2022, the platform documented 94 attacks and violations of media freedom involving 142 targets.

The war on European soil has already taken a deadly toll. Eight journalists and media workers, both Ukrainian reporters and international correspondents, were killed in the line of duty or because of their journalistic profession during the monitoring period, according to MFRR monitoring partners. They are: Yevheniy Sakun, Brent Renaud, Pierre Zakrzewski, Oleksandra Kuvshynova, Oksana Baulina, Maks Levin, Mantas Kvedaravičius and Frédéric Leclerc-Imhoff. Five were killed by gunfire, while the other three were killed by shelling.

There is evidence at least five more Ukrainian media workers and civilian journalists may have been killed or executed by Russian troops in occupied territory in apparent connection to their profession, though these have not yet been verified and the motive remains unclear. Such a loss of journalistic life within Europe has been unknown for decades and created a dark cloud over the wider landscape for media freedom.

In the first few months of the war, fast-changing frontlines and indiscriminate shelling exposed journalists to serious physical harm. Since 24 February, the MFRR documented 15 cases of domestic and foreign journalists in Ukraine suffering serious injuries as a result of shelling, airstrikes, or gunfire from military forces. An additional 19 cases were documented in which reporting crews or individual journalists were caught in artillery fire or were shot at but escaped unharmed.

At least eight journalists were kidnapped or abducted, with some undergoing torture and other human rights abuses at the hands of Russian soldiers before being released or transferred to detention centres. Reports that Russian forces had lists of Ukrainians, including media figures, to be killed or transferred to camps following occupation underscored fears about retaliation against the press.

In some documented cases, there is evidence that Russian soldiers fired deliberately on journalistic crews and cars bearing PRESS insignia. In many others, MFRR partners were unable to independently identify the source of the fire. Four confirmed strikes on TV towers and other broadcast infrastructure in Ukraine by Russian forces appeared to have been targeted. In 59.6% of all incidents attacks occurred within active warzones, while a further 11.7% occurred while journalists were travelling between locations or on their way to or from the front lines. In 74.5% of the incidents, individual journalists were attacked, with media outlets making up the bulk of the additional targets. 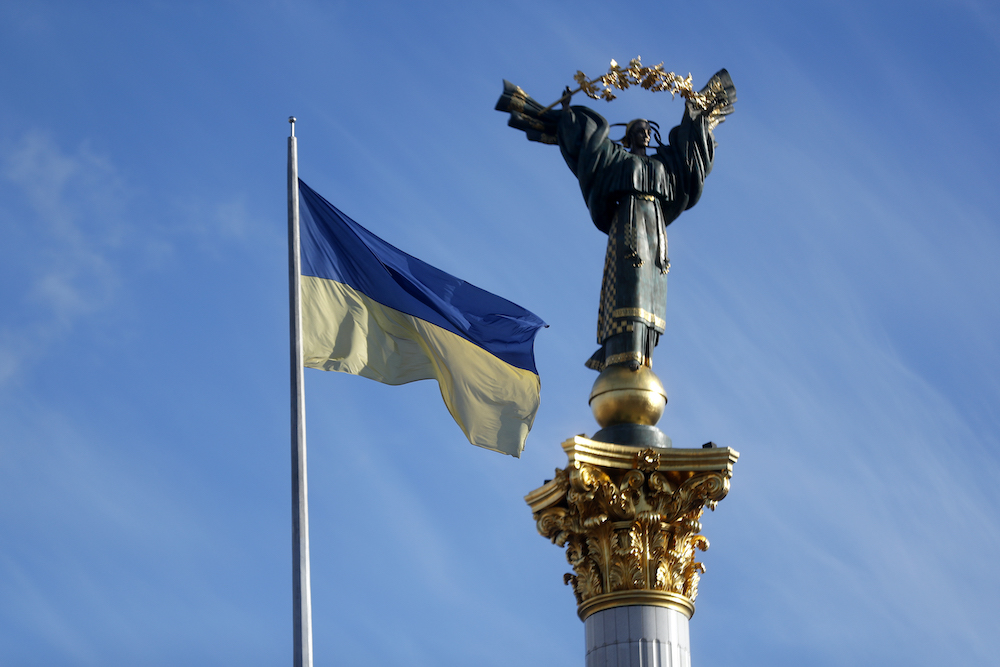 A national flag waves in front of the Independence monument in the central square of Kiev, Ukraine, 26 February 2022. EPA-EFE/ZURAB KURTSIKIDZE

Beside physical attacks targeting journalists and media-related property, MFRR documented 21 cases of serious intimidation and threatening. As existing information warfare between the two countries intensified after the invasion, many Ukrainian media outlets also became the target of intimidation from Russian sources. Individual journalists reporting on the conflict faced threats from unidentified users online who warned they or their family would face prison or violence in the event of military occupation.

These psychological attacks aimed at pressuring journalists into silence were sometimes followed up by cyber-attacks, including distributed denial-of-service (DDoS) attacks, often attributed to Russian hackers. The MFRR has documented at least nine serious cyber-attacks, with many more likely going unreported. In territory occupied by Russian forces, dozens of regional media outlets were forced to shut due to threats and the seizure of newsrooms, many of which were then taken over and used to disseminate Kremlin propaganda.

Outside the theatre of war, Ukrainian media have also faced unprecedented challenges for their survival. With the advertising market wiped out at the start of the invasion, the financial foundation of many of the country’s largest news outlets was shattered. Although foreign funding has poured into the media market, the uncertain military situation and a lack of ability to make long term plans means Ukrainian media face major uncertainty about their long-term sustainability or survival. For many, the economic situation remains dire. At the same time, staff shortages and the psychological pressure of war reporting have also taken a damaging toll on the journalistic community.

Widespread misinformation and disinformation spread on social media also posed serious pressures on accurate and ethical reporting. In practical terms, both national and foreign journalists have also faced challenges posed by curfews, checkpoints, and military restrictions. Overall, Ukrainian authorities continue to allow journalists reasonable freedom of movement within the country and access to military units and humanitarian relief efforts on the front lines, though individual challenges have been documented.

However, Ukrainian government authorities have implemented major wartime restrictions on the press, including the merging of all nationwide TV channels into a single government-run service. The shutting down of pro-kremlin Russian propaganda media also raised questions about the limits of state censorship during periods of war.

Despite the immense pressures, independent media in Ukraine remain vibrant and journalists continue to report courageously from the front lines, providing remarkable stories of resilience and adaptation. International solidarity and financial support will continue to be vital in the coming months. However, with no end to hostilities in sight, it remains too early to tell what the future holds for the media in Ukraine or what scars the war will leave on the country’s democratic fabric.

⚡️Our Monitoring Report covering January to June 2022 is out now!

We are excited to share the new #MapMF Monitoring Report which outlines the state of #MediaFreedom throughout EU Member States and candidate countries from January to June 2022.https://t.co/wr83QsDJYM

The MFRR monitoring report  – available to download here – documented violations and attacks on media freedom across European Union Member States and Candidate Countries between January and June 2022. The report was compiled by the International Press Institute (IPI), the European Federation of Journalists (EFJ), and the European Centre for Press and Media Freedom (ECPMF), as part of the Media Freedom Rapid Response (MFRR) project, which monitors and supports journalists, media workers, and media outlets that have been threatened.