Legislation weaponized to target both domestic and foreign media

On April 23, Latvia-based independent newspaper Meduza and PASMI, a Russia-based news medium reporting on corruption, were both declared a “foreign agent” by the Russian state.

The decision by Russia’s Justice Ministry made the two publications the latest in a string of independent media to be added to the list of co-called “foreign agents”, throwing them into financial jeopardy and providing a fresh illustration of how the 2012 law is being weaponized to harass Kremlin critics.

Video or audio content must start with a 15-second warning and the label “foreign agent” has to be posted on every single page of their website, including the spaces meant for advertisement. The news outlets will be required to have a legal representative in Russia and must regularly report their finances to Russian authorities.

If media do not comply, they face fines, criminal charges or even a complete publication ban in Russia. Since April 30, media outlets can be fined up to 50,000 Rubles (€556) for failure to mention their status as “foreign agent”. Similarly, individuals who share content from listed organizations can also be fined.

As a result, privately funded news outlets such as Meduza will lose large parts of their income from advertising revenue, as potential advertisers will be wary of being associated with organizations stigmatized as a foreign agent.

“We are now running against time”, Meduza Chief Editor Ivan Kolpakov told IPI. “We have lost advertisers and the business model that we have been building for six years is ruined. If we do not comply with the requirements of the Ministry of Justice, we face fines, site blocking, and even criminal prosecution.”

Likewise, they fear for the safety of their journalists and whether they are going to be able to continue working. “We have been practically called an enemy of the state – who of the speakers, sources, and experts will talk to such a media outlet?”, Kolpakov said. “The law on foreign agents is designed in such a way that even if you give an interview to a listed news outlet and, of course, are not paid for it, you are involved in the creation of the content and can theoretically be recognized as a foreign agent yourself.”

In order to buy some time, Meduza has drastically cut its expenses. According to Kolpakov, the salaries of Meduza employees have been cut by 30 to 50 percent, the office has been closed and collaborations with freelance writers have been all but ceased. At the same time, the news outlet launched a crowdfunding campaign and is trying to plan their next steps.

In the meantime, the Russian authorities have not provided any information as to why Meduza was put on the list of foreign agents. “We don’t know why it happened now. But we can see how the situation in Russia has changed in 2021 – now not only activists, but also journalists are being criminally prosecuted”, Kolpakov said.

“It’s an attack against the free press in Russia”

“We’re not foreign agents. We’re not an agent of anybody”, Kiryl Sukhotski, a regional director at Radio Free Europe/Radio Liberty (RFERL), another of the outlets on the list, told IPI. “Nobody tells us what to write, what stories to cover or how to cover them”. While RFERL is funded by the United States government, it has a strict policy of editorial independence.

In a press conference, the Russian presidential press secretary Dmitry Peskov said that RFERL has nothing to do with the Russian Federation. “This just beggars belief because all our journalists working for us in Russia are Russian nationals”, Sukhotski said. According to Sukhotski, RFERL has about 15 permanent staff in Moscow and more than 300 freelancers across the country – one of the largest networks of freelance reporters on the ground. “They do not think badly of Russia. They don’t wish ill on Russia because they are Russians themselves. When they say we have nothing to do with the Russian Federation, I’m not sure where that comes from.”

Nevertheless, RFERL and all its outlets have been on the foreign agents list since 2017. Due to the obligations of this status, RFERL had to spend a lot more money on accounting and legal advice over the last years, Sakharov said, with costs piling up. In February, Russia’s media regulator Roskomnadzor fined RFERL close to €125,000 over a series of alleged breaches by its network of websites. The regulator documented more than 160 cases of non-compliance and ruled against the outlet in every single case.

The situation worsened further at the end of October of last year. “They introduced some absolutely ridiculous and hideous labelling requirements”, Sukhotski said. “This made content unreadable and is defacing of our platforms. We’re complying with parts of the laws that do not interfere with our editorial contents but these new labelling requirements are so onerous and so invasive that we are not compliant with that. It’s an attack against the free press in Russia.”

What is truly alarming about the current legal situation, Sukhotski said, is that Roskomnadzor can change these regulations at any time. “They can issue an additional order because they don’t need a law for it, as these new requirements are not proscribed by the law, they are just an order”, he explained.

“Our offices could be raided or sealed. Our equipment could be seized. Our bank accounts could be frozen. That would obviously have an impact on us as an organization and subsequently on our journalists too”, Sukhotski said.

In addition, since the end of last year, individuals who engage in political activities can also be registered as foreign agents, meaning journalists can face the same requirements as news organizations. They too have to label all the content they publish with the foreign agent disclaimer, including posts or comments on social media, and have to report to the Russian authorities about their income and how they spent it.

“One of our contributors has been listed as a foreign agent”, Sukhotski said. “Now her social media accounts are defaced. In the same way, she had to put together a financial report that literally said, okay, I bought my cat food for 200 roubles.”

“The Kremlin does believe in the power of video, and they want to control it as much as they can. There is no independent television in Russia, and we were the only ones who were eager to do this whom they can’t control. The others are mostly Russian governmental channels, and they can be closed at any moment. But us they can’t control”, Sukhotski said. “No matter what happens in the coming weeks and months, we will continue to find ways to deliver the news and analysis to our audiences in Russia.”

A response to Western criticism

“The case of Meduza shows a new stage of attacks on independent media and squeezing the media landscape in Russia”, Nadezda Azhgikhina, director of PEN Moscow, told IPI.

“It is dangerous when the government begins to label media as foreign agents. In the Russian connotation, it makes it sound like a spy medium. Of course, the Russian audience is fragmented and not all fall for this propaganda – (but) still it still has some impact”, Azhgikgina explained. “It creates this image of being surrounded by enemies, dividing media into good media, which are mostly owned by the government, and there are suspicious media, those who serve others and work with Western money.”

“These measures seem like a response to European statements about harmful propaganda by the Kremlin”, Azhgikgina said. “Every time the EU or the U.S. established any sanctions against Russia, immediately new restrictions on press freedom and civil society are imposed.”

The law has been in place since 2012 and has been adapted repeatedly. For the longest time concerned public organizations that engage in political activities and receive funding from abroad. Among the earliest targets were international NGOs such as Amnesty International, Human Rights Watch, Transparency International, and the human rights watchdog Memorial International.

In 2017, the Russian authorities began listing media outlets that received foreign funding as well as journalists who worked for those outlets. In the same year, the Russian government put nine American-funded news outlets on the “foreign agents” list, including Radio Free Europe/Radio Liberty and all of their outlets, as well as Voice of America (VOA). Czech Republic-based outlet Medium Orient is also listed.

This followed the decision in 2017 by the United States to require a number of foreign-funded news outlets including Russia Today and Sputnik to register under the U.S. Foreign Agent Registration Act. RT is criticized as acting as the propaganda arm of the Kremlin and has a serious lack of transparency in its funding. Its director general is appointed directly by Putin and its supervisory board is not made public.

In Russia, since 2020 individuals including journalists and political activists can now also be registered as “foreign agents” and face legal consequences. Soon after, three journalists affiliated with RFERL were declared foreign agents. Most recently, on May 6 a court denied an appeal by RFERL contributor Lyudmila Savitskaya contesting her inclusion on the register.

Russian presidential press secretary Dmitry Peskov said the Kremlin supported the Justice Ministry’s decision to include Meduza on the foreign agents list, adding that he did not see any restrictions on activities for such media. “There is no ban on your activity. You can continue your operations and have the right to ask the Justice Ministry for reasoning”, he said in a press conference.

In a statement, the editor-in-chief of PASMI, Dmitry Verbitsky, criticized the labelling of PASMI as a mistake, as the news outlet did not receive any financial support from abroad. RFERL has filed a petition with the European Court of Human Rights to prevent Russia from enforcing fines of over €1 million against the news media for violations of the “foreign agents” law.

In a statement published on April 24, the EU rejected the Russian government’s labelling of Meduza as a “foreign agent”, stating that this law “contributes to a systematic infringement of basic freedoms, and restricts civil society, independent media and the rights of political opposition in Russia”.

Press freedom in Russia under pressure

Ahead of Russian parliamentary elections in September 2021, the situation for press freedom in Russia is deteriorating. In past months, numerous journalists have been confronted with police brutality and arbitrary arrests. According to reports, around 11,000 people were detained in the course of the nationwide pro-Navalny protests, including about 200 journalists.

Since April, Russian security forces have started to use facial recognition technology to identify activists and journalists that attend the pro-Navalny demonstrations. On April 7, at least five journalists and media workers were arrested while reporting from outside the penal colony in which Navalny was imprisoned at the time. Days later, on April 9, the home of the prominent investigative journalist Roman Anin was searched for seven hours by agents from the Federal Security Service (FSB).

In February, the editor-in-chief of the online platform Mediazona, Sergei Smirnov, was prosecuted for retweeting a joke and had to spend 15 days in prison. On World Press Freedom Day, 250 journalists from 63 countries appealed to the Russian authorities to stop attacks on independent media. On May 2, the US Mission to Russia condemned restrictions on independent media by Russian authorities in a statement ahead of World Press Freedom Day. 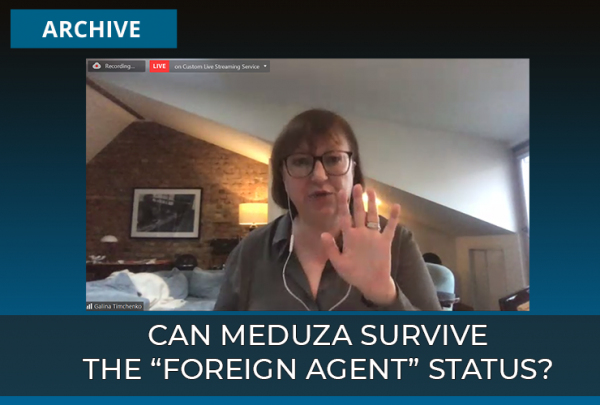 Can Meduza survive the “Foreign Agent” Status? (May 26)