Four suspects are on trial in Slovakia for the February 2018 murder of journalist Ján Kuciak and fiancée Martina Kušnírová. IPI is attending the trial in Pezinok, Slovakia as an observer. Follow @globalfreemedia for live reports. Daily summaries will be published on IPI’s website.

The witness, Zoltan Andruskó, had previously admitted his role in arranging the two alleged hitmen in the case and was sentenced to 15 years in prison in December. Now cooperating with prosecutors, he told the court Tuesday that Zsuzsová, who he said was acting on Kočner’s behalf, provided him a detailed surveillance file on Kuciak and asked for the journalist to be killed and his body disposed of without a trace.

Andruskó said Zsuzsová later paid him 50,000 euros, which he shared with the two alleged hitmen, Tomáš Szabó and Miroslav Marček, both of whom are also on trial. Marček plead guilty in court yesterday.

The International Press Institute (IPI) is in court observing the murder trial, which began on January 13. The four suspects face 25 years to life for the February 2018 murder of Kuciak and his fiancee, Martina Kušnírová, in their home in the town of Veľká Mača. Marček confirmed in his testimony yesterday that Kušnírová was not an initial target but was shot after she saw his face.

In cross-examination, Kočner, personally taking over the questioning, sought to undercut the credibility of Andruskó’s testimony. The strength of the prosecution’s evidence regarding Kočner’s personal involement in the case remains unclear, even with Andruskó’s statements. For his part, Andruskó underscored at several points his reluctance to participate in the murder but said he feared that he would be killed on Kocner’s orders if he went to the police.

The morning of the trial’s second day was marked by wrenching testimony from family members of the two victims in which they described the moment they learned of the murders. Kusnirova’s mother, Zlatica, took the stand first, demanding of the four suspects to know who had given them the right to take the lives of their children. Bringing herself and much of the courtroom to tears, Kušnírová spoke in deeply emotional terms of the hole her daughter’s murder had left in her life. “Even today I understand she’s dead but sometimes I somehow feel that she will call or I have the inkling to call her until I realize she is no longer there”, she said.

Kuciak’s parents, Jozef and Jana, and his younger brother, Jozef Jr., recalled a message Kočner had sent Kuciak in October 2017 in which the businessman threatened to dig up dirt on his family and told the journalist, “I guarantee you will stop writing.” Kuciak had told his family on that occasion that there was no reason to be afraid, saying that nothing like that could happen in Slovakia.

Despite those assurances, Jana Kuciaková said she feared her son’s coverage of politics and corruption put him at risk . “I told him not to write on dangerous topics, to focus on sports. But he said he wanted to make Slovakia better”, she said in a previous deposition that prosecutors read aloud to the court due to a speech impairment.

The family testimonies laid bare the tragedy of two young lives ended for what prosecutors say was retaliation for Kuciak’s journalistic work. Kuciak had recently graduated from his doctoral programme and he and Kušnírová were due to be married in May of that year.

Andruskó began his testimony by offering a personal apology to families. “I am terribly sorry for what has happened”, he said. “I don’t know how to remedy it. That is probably impossible.”

The trial will continue Wednesday. 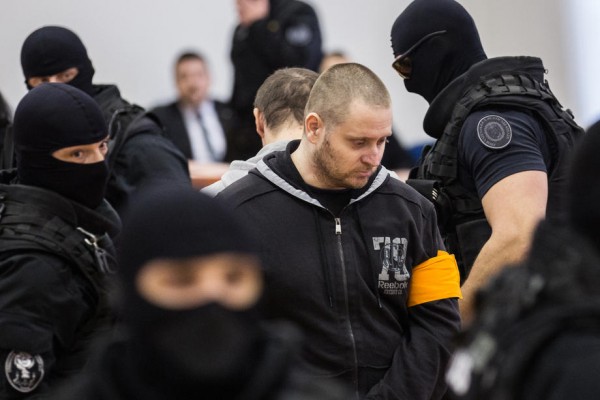