The text, published on July 17, explicitly forbids the verification of any statement on “social media, blogs, generic websites, print, online outlets and broadcasters“ unless the media organization publicly states its affiliation, if any, to a political party, government or ideology.

The bill also prohibits the fact-checking of “opinions” and includes a provision by which fact-checkers can be held legally liable for labelling them as ‘fake news’. Ultimately, a judge would decide what classifies as disinformation.

Though experts say the bill is unlikely to move forward – no other party has expressed support for it – it still represents the latest attempt by the far-right party to curb fact-checking and independent journalism in Spain.

On April 15, in her address to the Parliament, Vox MP Macarena Olona labelled Maldita.es, a leading fact-checking website, and journalists from La Sexta TV as the “Gestapo that watchdogs the official truth”. The comments were in response to publications both outlets had recently posted debunking false statements the far-right party previously made against the government’s management of the Covid-19 outbreak.

Vox took the pressure on fact-checkers up a notch on April 21 when the party explicitly requested the appearance of journalists Ana Pastor, founder of the fact-checking media outlet Newtral, Clara Jiménez, founder of Maldita.es, and members of EFE Verifica, before the congressional Commission for a Quality Democracy to explain how they monitored and verified public statements.

“We don’t only fact-check Vox’s statements but also those from the entire political spectre”, Clara Jiménez told IPI in a phone interview. According to Jiménez, 60 percent of the statements that Maldita.es fact-checked during Spain’s state of emergency came from the ruling Socialist Party, 20 percent from the opposition [conservative] Partido Popular, 10 percent from Vox and 10 percent from Podemos.

“While other political parties have not taken on fact-checkers and journalists because it would be detrimental for our democracy”, Jiménez explained. “Vox have accused us of restricting their freedom of speech and encouraged their followers to distrust our work.”

On April 10, an unfounded rumour quickly spread within the far-right party online community that Newtral and Maldita.es were censoring Vox’s statements on WhatsApp.

The rumour claimed that both fact-checking websites, which are part of the four media organizations in Spain that assist Facebook – WhatsApp’s parent company – in debunking disinformation, had the power to remove and delete messages.

The campaign gained momentum with tweets from some of Vox’s political leaders supporting the rumour, forcing the tech company to issue an statement denying the allegations.

The growing polarization in Spain in recent months has created an increasing toxic atmosphere for journalists to work in.

The entrenched war on social media that IPI already warned about in a 2018 in-depth report has spiralled with the Covid-19 outbreak, which hit Spain especially hard. Far from creating a united front, there have been heated debates in Parliament with frequent denigrating comments among MPs from all political parties.

“This heat has penetrated the society”, Virginia Pérez-Alonso, president of the Platform in Defence of Free Expression (PDLI) and an IPI Board member, told IPI in an interview. It has “created the mantra that ‘journalists manipulate information and lie’ therefore making media workers an easy target when covering protests on the street”.

IPI, as part of the Media Freedom Rapid Response mechanism in Europe, issued alerts on the verbal and physical attacks against a photojournalist for Spanish daily newspaper La Razón as he was covering the May 23 demonstration in Madrid organised by Vox against the government’s handling of the coronavirus crisis.

Earlier, on May 19, IPI submitted an alert on the attack against a journalist and cameraman from Madrid Directo, a current affairs TV and radio program broadcast on the public station Telemadrid, after filming a fight between a group of young men.

“This unbreathable atmosphere has a chilling effect on journalists”, Pérez-Alonso said. “Even if we try to shield ourselves from all this, it’s only natural that journalists feel reluctant to report from street demonstrations or cover certain topics in order to minimize the risk of being targeted with violence, both on- and offline.”

Polarization has exponentially increased throughout the pandemic, ignited by, among other things, the proliferation of hoaxes and disinformation coming from all political trenches.

This trend has taken its toll on journalists and fact-checkers.

“These attempts to discredit and smear fact-checkers impact on their ability to reach the audience at a time where most people are thirsty for quality, verified information”, IPI Deputy Director Scott Griffen said. “The work of these organizations is to check whether the facts that state actors and political parties present to the public stick to reality and, therefore, serve as a guarantee that the information on which people build their own opinion is free from any interest other than the wellbeing of all members of society”.

“Our work resides at the centre of the political chessboard, refuting lies and rumours from all sides to provide the people with accurate information with which they can take informed decisions” Jiménez explained. “If the centre field in which we operate shrinks, it will be arduous task to reconcile any polarized position”.

And Pérez-Alonso concluded: “If the situation worsens, it can be devastating for press freedom in Spain”. 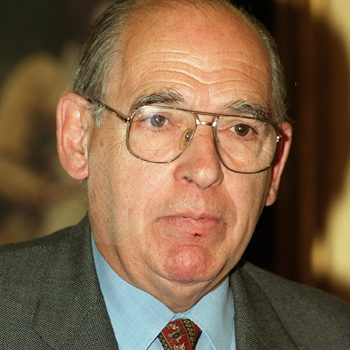 Antonio Fontán was the editor of the independent national daily Madrid from 1967 to 1971.…
Read More