Disinformation is corroding our democracies. There’s an important role for journalism to bring clarity without giving oxygen to bad actors.

“Deception has been the arsenal of authoritarians for centuries – the issue now is that there are bad actors throughout the entire world who are seeking to destabilize democratic countries by contaminating the news supplies through disinformation”, according to web pioneer and craigslist founder Craig Newmark.

The philanthropist said that ever-evolving forms of online misinformation are being spread by both state and non-state actors in an increasingly digital world, posing significant challenges to democratic politics and requiring new techniques and responsibilities for journalists and fact-checkers to help combat it.

Newmark was speaking at an event entitled Fake News! Whose Problem is it? on the fifth day of IPI’s virtual World Congress 2020, which brought together journalists, fact checkers and donors to discuss what different forms so-called “fake news” takes, what the risks associated with it are, and what role the media organizations can play in fighting it.

Craig Silverman, the award-winning media editor of BuzzFeed News and one of the world’s leading experts on online misinformation and fake news, said not enough attention had been paid to studying online disinformation and its corrosion of democratic politics. This changed, he added, after the election of Donald Trump and the victory of Rodrigo Duterte in the Philippines in 2016.

Silverman broke down the actors spreading misinformation into three general categories. “The first is individual citizens on social media, trolls trying to spread fake news. The second is state actors and state-backed propaganda machines who hire or pay people to spread disinformation on a larger scale. Think of Russia in the 2016 U.S. election or China’s 50 cent army. The third is financially driven actors who are making huge amounts of money through advertising revenue on Facebook by spreading false information.”

While Facebook had taken steps to shut down the third kind of actor in recent years, Silverman added, misinformation and the actors spreading it are constantly evolving. “New threats are emerging all the time,” he said. “One of the big changes I would highlight is the professionalism of disinformation. There are now PR firms which specialise in spreading political messaging in particular countries around elections.” 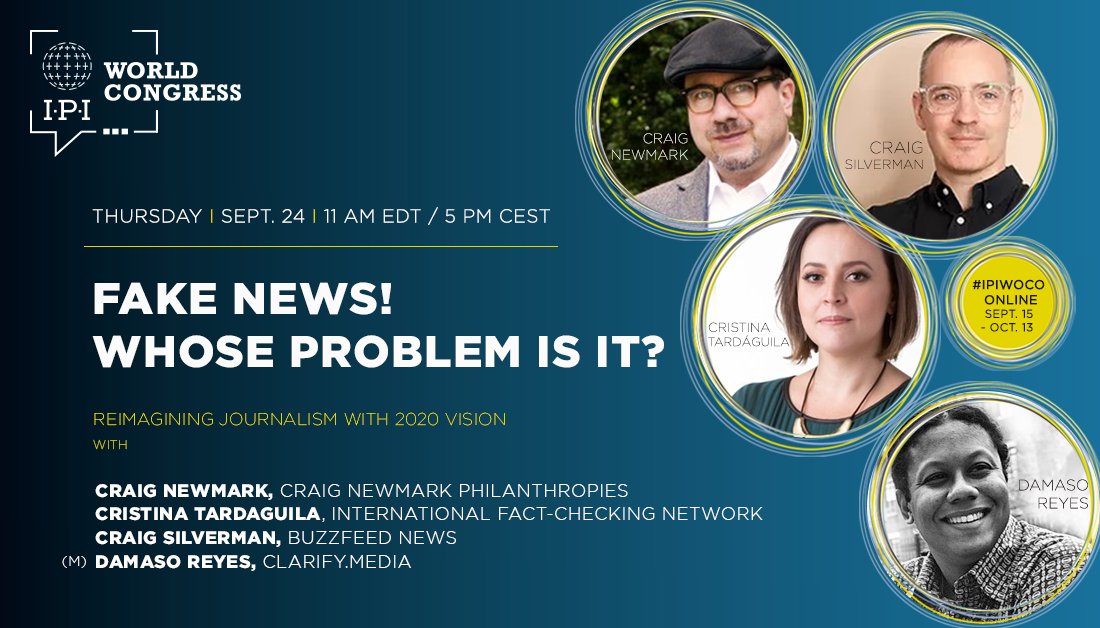 Turning to how journalists and fact checkers should responsibly report on this kind of “fake news”, Cristina Tardáguila, the associate director of the International Fact-Checking Network’s Associate Director, said journalists themselves bore a big responsibility not to uncritically republish misleading claims.

Tardáguila, who founded Agência Lupa, the first fact-checking initiative in her home country of Brazil, said: “We hear a lot of crazy claims spread by our President Jair Bolsonaro. But a lot of the press will just publish the unverified claim as a headline, with no analysis or fact checking whatsoever.” This kind of bad journalism helped create mistrust in the media, she explained.

Sadly, she added, the Covid-19 pandemic had presented huge opportunities for fake news about the virus and potential curses to be spread. “Whenever we see a new update on the coronavirus, there is always an explosion of false information”, she said.

Newmark noted that a big part of the challenge here was not for media outlets to amplify this kind of disinformation. “You can choose not to air the disinformation, or you can report it in the way that people listening or reading understand clearly that it’s a lie,” he said.

Silverman agreed, saying there was a delicate balance to be struck. “You have to recognise that by reporting false information or conspiracy theories you may be amplifying it and introducing it to people before they’ve even heard about it. You don’t want to expose people if you don’t have to.”

The moderator Damaso Reyes, founder of Clarify.Media, suggested newsrooms could report news responsibly by following the “truth sandwich” approach, in which the real information is presented first, followed by the lie, accompanied by sources and further evidence. “It’s so important for information to always be contextualised,” he explained.

Tardáguila pointed out that several leading fact-checking organizations around the world such as PolitiFact and FactCheck.org were already using this approach, and that journalists and newsrooms could learn from these techniques.

Need to build fact-checking capacity, build an army of fact-checkers and get the truth out there! Misinformation is not going to go away and we need to keep building tools to counter it. Great conversation at #IPIWoCo with @craignewmark @CraigSilverman @ctardaguila @damasoreyes

Discussing the efficacy of fact-checking, Silverman noted that research on the subject had been relatively encouraging. “There can be positive effects, but we need to be realistic with our expectations. Changing minds is not always the goal. There are accountability issues. Studies have shown that if politicians are aware that fact checkers are at political events, they’ll change their behaviour accordingly.”

The Buzzfeed media editor added that simply pointing out the lies was not enough. “As a journalist you have to avoid amplifying the false information, but also provide clarity and you have to contextualise through storytelling techniques or sources that people respect and believe are credible.” He later added: “Pulling people back that are already quite far down the rabbit hole of a conspiracy theory is a big task. But leaving breadcrumbs for people to find their own way back is achievable.”

Silverman and Tardáguila suggested free digital tools such as Crowd Tangle and Tweet Deck that media outlets could use to analyse trends and spot viral misinformation that needed to be addressed. This information allows journalists to better understand when to report on new inaccuracies or when to republish older stories that already debunked misleading claims that had resurfaced. Reyes said that diversity in the newsroom was another key element of being able to spot different trends of disinformation in different communities.

The moderator added that for journalists in the 21st century, the availability of global news networks and the instantaneous spread of false information on social media meant that the professional ability to verify and fact-check large amounts of information was more important than ever. “But we have to build these capacities into studies, newsrooms and communities so that journalists have these skills,” he added.

He concluded: “Misinformation is a problem that affects everyone and impacts all of our daily lives. As journalists and editors, we have to talk about it, not ignore it. We have to create tools and support readers by being accurate and transparent. Most importantly, we can’t be afraid to call a lie a lie, no matter who is saying it.”