At the 2021 IPI World Congress, ProPublica Editor-in-Chief Stephen Engelberg spoke to Jacqui Park, IPI head of strategy and innovation, about the not-for-profit outlet’s unique place in the American media landscape, whether it can be replicated elsewhere, and how news leaders can build a culture of philanthropy for journalism.

Engelberg began with an explanation of how ProPublica came into existence in 2007 with the help of angel investors who invested millions into the organization for its first three years. After those first few years, ProPublica began to diversify its donor base. Following the election of Donald Trump in particular, the publication was able to attract a wider base of donors who made smaller contributions.

“We now have 40,000 donors and we get about 15% of our money from people who just send us $50 and $100 checks a year”, Engelberg said via Zoom. “To our surprise we were able to build a combination of small donors and these larger donors to help support this and the organization is now four times larger.”

ProPublica aims to do public interest stories that wouldn’t be done if the publication didn’t exist, ranging from the dangers of fracking to the way wealthy Americans evade paying taxes, Engelberg said.

“What we have done over the last several years is mount a major, major effort to create regional investigative reporting hubs across the country,” he said. “We have three major places where we’re situated with full-time reporters and editors, and we are finding that the gap that needs to be filled there is bigger than the national gap ever was.”

Engelberg said ProPublica has a clear line when it comes to accepting money from donors, noting that the American press is much less likely to accept government money than the European press.

“I think this reflects a deep distrust on our part”, he said. “We are very, very careful to never take even an indirect dollar from a U.S. government institution.”

ProPublica will accept donor money as long as the donor is not pushing for the organization’s reporting to produce a particular answer, he said.

“We’ve had a surprisingly low rate of people canceling their donations because they didn’t like stories”, he said. “It’s actually happened almost never — maybe once or twice in 13 years.”

Engelberg said the future of funding investigative journalism lies in convincing local citizens they need to pay for good journalism.

“At the national level, American foundations and a good group of wealthy people realize that ProPublica and other people like us form an important part of democracy”, he said. “We have yet to close the case with our local citizens — who could afford this — that they need to pay for journalism, not by buying a subscription, but by actually supporting the local news outfit, and that remains a question mark for us here in America.”

“How do we, who are purveyors of neutral, honest, documented information, continue to be part of the conversation in a serious way and not get shouted down?” he asked.

Ultimately, investigative reporting has the power to create real change, he said. He explained how ProPublica published a series on the dangers of fracking before it was widely understood. The New York governor was then a few days away from deciding whether or not to allow fracking in the state — and ProPublica’s work had significant sway on his decision.

“He imposed a moratorium which turned into a ban”, Engelberg recalled. 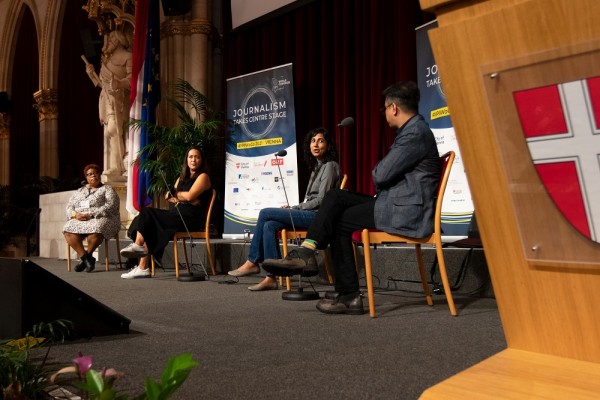