Local reporting is central to democratic accountability, but is under growing pressure. IPI World Congress panellists examined the way forward.

Earlier this year, IPI published a report that found local news is the most disrupted sector of the media, but is also the sector with the greatest potential to form the bedrock for a new media ecosystem. The IPI World Congress session “Strategies: Think globally, report locally” brought industry veterans and emerging talent together to explore challenges facing local news as well as innovative methods to build stronger, more sustainable newsrooms worldwide. The panel was organized in partnership with Report for America, Report for the World, Columbia Journalism School and Craig Newmark Philanthropies.

Coll said the crisis in local news is occurring globally, and to develop vibrant and sustainable independent local media, newsrooms will have to pursue different business models. He noted that raising money through the nonprofit sector can support independence at a time of intense commercial pressures.

The future of local media has profound implications for democracy, he added.

“Local reporting is the bedrock of democratic participation”, he said. “It’s the court of last resort for people who need to hold powerful people accountable.”

Coll explained how this was exemplified through the #MeToo movement, where journalism accelerated accountability in a way that couldn’t have happened through the judicial system.

Despite the power of local reporting, the sector is under intense pressure, with propaganda and disinformation hastening its decline or filling the gap it leaves behind.

The number of professional journalists reporting locally has declined dramatically as a result of economic disruptions. Even with the backing of nonprofit organizations, the net loss of reporting is substantial, which leads to a dearth of professional coverage of local issues.

Third, social scientists are starting to see a link between the collapse of local news and a decline in informed civic participation, resulting in a negative loop and the rise of deliberate, organized disinformation.

One local news outlet figuring out new ways to serve its audience is the Sahan Journal, a nonprofit digital newsroom dedicated to reporting for and about immigrants and communities of color in Minnesota. Ansari emphasized how the community comes first in their newsroom.

“We cover communities that have experienced intense trauma, in a way in which we put their stories and their needs first, not a headline, not a tweet, and not a soundbite”, Ansari said.

Chime covers climate change in Nigeria for TheCable, with the goal of helping people make the connection between issues in their communities and climate change. She explained how her reporting on the ways communities are adapting to changes in the environment helps give ideas to other communities facing the same problems.

Looking ahead to the future, the panelists said journalists need to focus on data reporting, changing demographics in their communities, and countering disinformation.

Coll said a journalist who can sort authentic citizen video from fake citizen video, for example, has a major advantage in today’s world as well as in their local communities.

“There is no bigger story than local stories right now”, Sennott said. 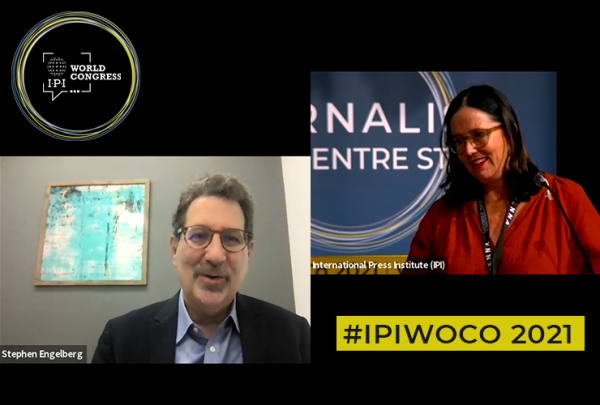