Freelance journalist Hopewell Chin'ono gets off a prisons truck as he arrives in handcuffs and leg irons at the Harare Magistrates Courts in Harare, Zimbabwe, November 6, 2020. EPA-EFE/AARON UFUMELI

The International Press Institute (IPI), a global network of editors, media executives and leading journalists for press freedom, today condemned the re-arrest of Zimbabwean journalist Hopewell Chin’ono and calls for an end to the harassment of critical journalists in Zimbabwe.

Chin’ono, an investigative journalist and documentary filmmaker known for his coverage of corruption, was arrested at his home on January 8 after being accused of sharing false information about alleged police violence on Twitter. According to a posting on Chin’ono’s Twitter account he was taken to the Harare Central Police Station. Afterwards he was kept in the Chikurubi high security prison, according to the news reports.

Reports stated that Chin’ono was arrested for sharing a video on his Twitter account that showed a police officer beating a baby to death in the Zimbabwean capital Harare. A bail hearing in the court was postponed to Wednesday.

“Zimbabwe authorities should immediately release Hopewell Chin’ono and drop all charges against him”, IPI Deputy Director Scott Griffen said. “We condemn the repeated harassment of Hopewell over the past few months as a response to his journalistic work. The latest charges against him appear to be a cynical effort to punish a reporter for sharing information in the public interest.”

Chin’ono was first detained in July after he published a story revealing COVID-19 procurement fraud within the Zimbabwean Health Ministry. According to news reports, he was held in Chikurubi high security prison for six weeks, reportedly under inhumane conditions. Chin’ono was released on bail in September. The release was contingent on a ban on using social media for anything that might be critical of the ruling Zanu-PF government.

In November, Chin’ono was arrested again after being accused of breaching the bail conditions. He had tweeted about a gold smuggling case in which political elites were allegedly involved.

Nqaba Matshazi from the Media Institute of Southern Africa (MISA) told IPI that Chin’ono will not seek bail this time, as he has argued that his arrest violated Zimbabwean constitutional law. Chin’ono’s lawyers have requested the court to drop the charges against him.

In a hand-written statement Chin’ono said that he had chosen to fight the “unconstitutional law” instead of immediately applying for bail. “I would have totally sold out the journalism profession and the nation if I chose my immediate liberty over the media’s right to free speech, the nation’s right to speech and be protected after speaking”, Chin’ono wrote.

According to Matshazi, in this case Chin’ono might have to wait for months in prison until, and if, the High Court of Zimbabwe dismiss the charges against him. “In Zimbabwe, the sharing of false information may lead to a prison sentence of 20 years”, Matshazi said.

Working conditions for journalists in Zimbabwe are deteriorating amidst regular harassment of critical journalists. According to data collected by IPI on COVID-19 related press freedom violations, Zimbabwe stands out among African countries with the highest number of arrests and charges against journalists related to coverage of the pandemic. IPI has reported 14 press freedom violations linked to COVID-19 in Zimbabwe.  In April 2020, the High Court of Zimbabwe urged the police to stop arresting and harassing journalists for doing their jobs during the coronavirus lockdown. Despite this order, many journalists have been charged, arrested and attacked during the crisis. 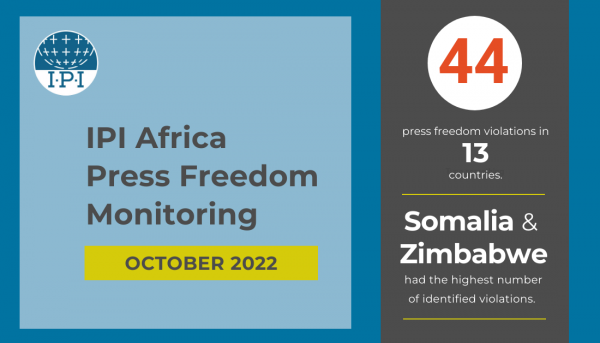