IPI said the spate of arrests and violence against the press was yet another stain on the Russian government’s dismal press freedom record and a stark example of the tactics used by the security forces to suppress media coverage of protests critical of the Kremlin.

On Saturday January 23, the Russian Journalists’ and Media Workers’ Union (JMWU) and the Russian Union of Journalists (RUJ) documented at least 52 violations against media covering unsanctioned demonstrations in 17 different cities across the country.

Arseny Vesnin, a correspondent of Echo of Moscow and Vot Tak TV, was detained live on air and reportedly beaten by police during his arrest. Two journalists with SotaVision, Peter Ivanov and Anastasia Karpina, and Tardigrad journalist Andrey Makashov were also detained.

In the city of Ufa, the editor-in-chief of the radio station Echo of Moscow, Ruslan Valiev, was also detained as he covered the planned protests, despite having his journalistic ID. Other detentions were made in Khabarovsk, Makhachkala, Pskov, Stavropol, Kursk, Samara, Voronezh, Novosibirsk, Vladivostok, Kazan, Blagoveshchensk, Krasnoyarsk, Cheboksary and Yaroslavl, according to the RUJ.

The JMWU said the majority of those detained were released shortly after without charge after having their documents checked. It added that most journalists detained either carried press cards or had other visual forms of press identification such as vests.

“These mass detentions of journalists covering protests are yet another stain on Russia’s press freedom record and stark example of the Kremlin’s authoritarian playbook when it comes to suffocating coverage of protests critical of the government”, IPI Deputy Director Scott Griffen said. “We demand that any journalists remaining behind bars are released immediately and that security forces halt the use of arbitrary detentions and violence as a means of harassing, pressuring and intimidating journalists covering rallies.”

Griffen added that the heavy-handed tactics on show over the weekend bore similarities to the measures used by security forces in neighbouring Belarus to round up and intimidate journalists covering recent anti-government protests. He called on Western governments and the European Union to strongly condemn the mass detentions.

In the capital Moscow, journalists covering rallies were beaten or had equipment damaged by riot police. Novaya Gazeta correspondent Elizaveta Kirpanova was hit on the head with a truncheon, despite wearing a visible press vest, after she was trapped between protesters and security forces in Pushkin Square.

Another reporter for the newspaper, Victoria Odissonova, had her camera lens smashed after being hit by police. Meduza journalist Kristina Safonova was also reportedly hit by riot police in the central square as she filmed clashes, despite wearing a PRESS vest.

Reports suggested police were using section 1 of article 20.6 of the Administrative Code of the Russian Federation to detain journalists for allegedly for not wearing masks during the rallies.

The violence against media came amidst the largest anti-government protests in Russia since 2017, which were met with a heavy-handed crackdown by police and the arrest of more than 3,700 people, according to human rights project OVD-Info.

Demonstrators had been calling for the release of opposition politician Alexei Navalny, who was detained at Moscow’s Sheremetyevo airport as he returned to Russia for the first time after being poisoned with a Novichok nerve agent. 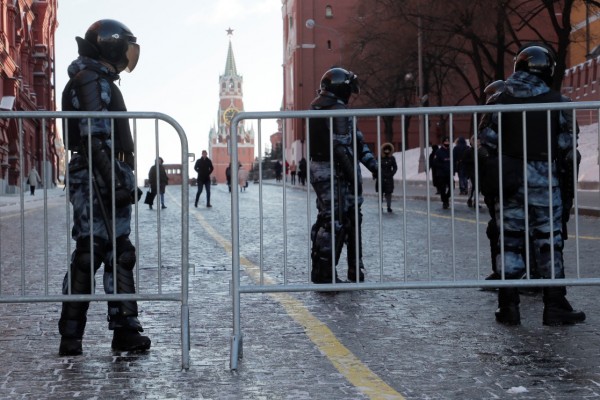 On January 31, Russian freelance photographer Ivan Kleymenov was shot with a taser gun and…
Read More