The International Press Institute (IPI) condemns the recent killings of journalists in Afghanistan, Haiti, and the Democratic Republic of the Congo. IPI urges local authorities to investigate these cases and ensure that the perpetrators do not escape with impunity.

IPI Press Freedom Manager Barbara Trionfi stated today: “IPI is extremely troubled by the dangerous conditions that journalists in Afghanistan, Haiti, and the Democratic Republic of the Congo continue to face. IPI urges authorities to thoroughly investigate the motives behind the killings of Mohammad Mohsin Hashimi, Pierre Richard Alexander, and Guylain Chandjaro, and extends its deepest condolences to their respective families and colleagues.”

On Sunday, May 19, Afghan authorities in the village of Kharij Dara in the north-eastern province of Kapisa discovered the body of radio journalist Mohammad Mohsin Hashimi in a well near his home. Abdul Woudod Haideri, district governor of Nijrab in Kapisa, told Radio Free Europe that Hashimi’s body had stab wounds.

According to NAI, a leading Afghani press freedom organization, Hashimi, who worked on the technical staff for the Saday-e- Nejraab (The Voice of Nejraab) radio station, had been missing for 19 days. His family contacted local authorities to report his disappearance on May 1. Hashimi’s wife told police that he had been threatened several times prior to his disappearance.

Reports indicate that police have arrested three suspects in connection with the murder and that Hashimi’s body has been sent to a forensics lab for further investigation.

Hashimi was the second journalist killed in Afghanistan last week. A May 14 report from the International Federation of Journalists indicated that Mohammad Nasim Toorak, a journalist in the eastern Laghman province, was murdered by unknown assailants. NAI also reported 17 incidents of violence against journalists since the beginning of 2013.

Alexandre, 40, had been working as a correspondent at Radio Kiskey for the past 10 years. According to local reports, Alexander received a gunshot to his abdomen just outside of his home in Saint Marc late Friday May 17. He was transported to a local hospital, where surgery was thought to have been successful, but Alexandre died from complications Monday.

Police detained a suspect in the case and confiscated a weapon they claim was used in the incident. According to testimony from relatives and friends, Alexandre was hit a few meters from his home.

Alexandre was also host of a daily political debate program on local radio station, Radio Delta. He leaves behind his wife and two children.

The Haitian Ministry of Communication said in a statement Tuesday that it, “deplored and condemned the death of journalist Pierre Richard Alexander, and that it “congratulates the police authorities who have taken into custody the alleged perpetrator and provides an assurance that every effort will be made ​​for him to be referred to by his natural judges in accordance with the law,”

The body of a Congolese journalist Guylain Chanjabo was found on the bank of the Ngezi River near the provincial capital of Bunia in eastern Democratic Republic of the Congo (DRC), Saturday.

According to a report from the Associated Press, Chanjabo, a journalist at Radio Canal Révélation in Bunia, had disappeared 12 days before.  Police have opened an investigation into the killing, the town’s mayor said.

“We found his body yesterday in an advanced state of decay. It showed signed of strangulation according to the doctor who examined him on the scene. We couldn’t move him further as it was very decomposed and had to bury him near the river,” Bunia Mayor Ferdinand Fimbo said

Chanjabo’s death highlights the increasingly dangerous conditions for journalists in eastern DRC.   Journalistes En Danger (JED), a DRC-based press freedom group, reported more than 54 cases of press freedom violations between January and the end of April of this year.

“Cases of abuse and intimidation of journalists have increased. It’s intolerable,” Tuver Wundi a JED member in Goma said. “The death of this journalist in Bunia is very serious.”

In 2012, JED also documented 184 cases of violations of press freedom, including 78 incidents of censorship and 59 arrests of journalists.

The conflict between the Congolese army and the M23 rebels, a Tutsi-led rebellion allegedly backed by Rwanda and Uganda, has exacerbated the situation for journalists in the region. Both sides have attempted to control the media by restricting journalists’ movement, prohibiting access, or by threatening journalists.

Several journalists working in territory under rebel control have had to leave because of death threats. 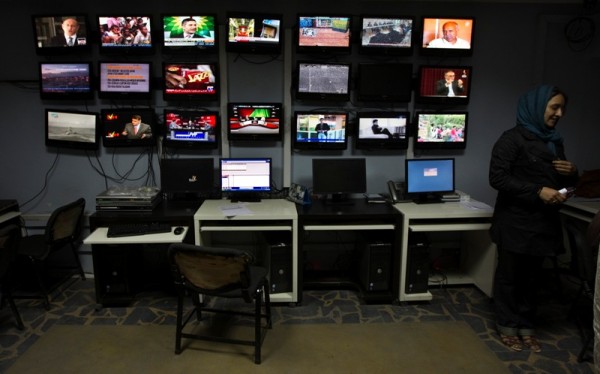