Documents related to an investigation into fraud involving EU funds in Bulgaria that were saved from an attempt to burn them. (Photo: Bivol.bg)

Dimitar Stoyanov, a reporter for the Bulgarian investigative journalism website Bivol, and Attila Biro of RISE Project Romania, were taken into custody for several hours by authorities in Radomir, western Bulgaria, as they attempted to prevent and document the destruction of evidence related to the investigation, which is funded by IPI’s #IJ4EU grant programme.

On Monday, Bivol published a report detailing what it described as “large-scale and wide-spread corruption” in EU-funded projects in Bulgaria worth hundreds of millions of Bulgarian leva. The site based its findings on accounting documents from “a network of consultancy firms linked to large construction companies”.

The #GPPGate #ДжиПиГейт investigation is funded by #IJ4EU project won by Bivol and @riseprojectro. A wisely spent 36 000 € helped unvealing the mecanics behind massive EU funds fraud worth hundreds of millions @OCCRP https://t.co/9p91nQVzup

Atanas Tchobanov, editor-in-chief of Bivol, told IPI that the site began to receive tips that one of the firms cited in the report, the GP Group, was moving documentation and equipment from its headquarters in Sofia, the Bulgarian capital. Tchobanov said the site informed the authorities but that the moving continued. On Thursday, Bivol received information that the material was being destroyed near Radomir. After informing the authorities again, Stoyanov and Biro travelled to the site, where they found official documents related to EU projects being burned.

Shortly after arrival, however, local police arrested both journalists and refused to release them despite being presented with press cards. Police also confiscated the pair’s mobile phones and did not allow them to make calls. They were eventually released in the early hours of Friday and their phones were returned to them.

On Friday, the head of Bulgaria’s anti-mafia police force apologized for the incident, which he attributed to poor communication with local police, although Tchobanov said that members of the force with knowledge of the context were at the scene and could have intervened. Bivol also rejected the Bulgarian Interior Ministry’s claim that the journalists had only been taken in for questioning, supplying photographs of an arrest warrant.

“The detentions of Dimitar Stoyanov and Attila Biro, coming on the heels of a massive report on corruption involving EU funds, are deeply troubling”, he said. “Bulgarian authorities should be focused on following up on the reports of wrongdoing exposed by Bivol and RISE Project instead of harassing their journalists.”

“They apologized, and it is good that they recognized the error”, he said of the arrests. “But I still don’t see a move against the bad guys (involved in the reported fraud) and I feel that they have a political umbrella.” 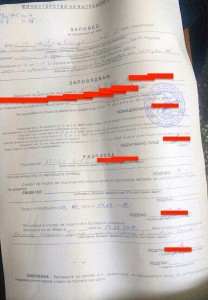 An independent jury in June awarded Bivol Bulgaria and RISE Project Romania a €38,000 grant to investigate fraud, money laundering and corruption patterns used by organized crime groups in Romania and Bulgaria and the unseen links that unite them. The project is one of 12 selected as part of the initial run of the IJ4EU grant, which is funded by the European Commission and independently managed by IPI.

Tchobanov said his team was undeterred after the incident.

“It is even more motivating – if they want to hide something, it means the information is really explosive.”