The International Press Institute (IPI), a global network of editors, media executives and leading journalists for press freedom, is concerned over Facebook’s deactivation of accounts of journalists in Syria, Tunisia and Palestine.

Over the last few months, dozens of Syrian, Tunisian and Palestinian journalists and activists have complained that their accounts have been deactivated by Facebook. According to the Syrian Archive, Facebook deactivated 35 accounts of Syrian journalists and activists in the last two months, while more than 50 Palestinian journalists have found themselves logged out of their accounts for purported breaches of Facebook’s community standards The social media company reportedly categorizes these accounts as linked to terrorism, but the Syrian Archive has stated that none of the journalists listed had links to terrorist groups as designated by the U.S. government, the metric Facebook typically uses in such cases.

In an interview with the Middle East Eye, Samer Khweira of the Palestinian Al-Haya radio  said his posts were often removed for alleged violations Facebook’s community guidelines, regardless of their content. “If I posted videos of settler attacks on farmers, or of clashes with Israeli soldiers, it would be taken down”, he said.

“Anything that has the word ‘martyr’ in it, or even the phrase ‘rest in peace’, would be taken down”, freelance journalist Imad Jebreen was quoted as saying.

Both journalists emphasized the importance of Facebook as a platform to spread information among their community and raise awareness of key issues.

“Facebook’s censoring of these accounts is concerning, particularly given the company’s close relationship with governments and the complete lack of transparency and inability for the closed accounts to appeal the decision. Social media companies must not become the long arms of state censors”, IPI Director of Advocacy Ravi R. Prasad said. “In conflict zones and countries where press freedom is heavily constrained, social media channels are essential channels of disseminating news to the public. By deactivating accounts of journalists, Facebook is hindering the the public’s right to information.”

Suspicion over Facebook’s censorship of certain voices goes back a long way: As of 2016, Facebook has reportedly been working with the Israeli government to monitor posts that incite violence. Israeli officials argued that a wave of violence at the time was fueled by social media sites, and insisted Facebook improve its monitoring and tighten restrictions over posted content. Prior to this arrangement, Israeli security authorities monitored incitement and submitted complaints to Facebook. According to then-Israeli Justice Minister Ayelet Shaked, 95 percent of the submitted complaints were granted. Following this period, around 400 Palestinians were arrested due to content they shared and posted on Facebook.

Between 2011 and 2014, Facebook reportedly deleted dozens of opposition pages in Syria for allegedly violating “community guidelines”, some of which reported news from Syria to the west.

In the case of the Tunisian accounts, Facebook responded to a backlash by claiming the removals were due to technical errors. 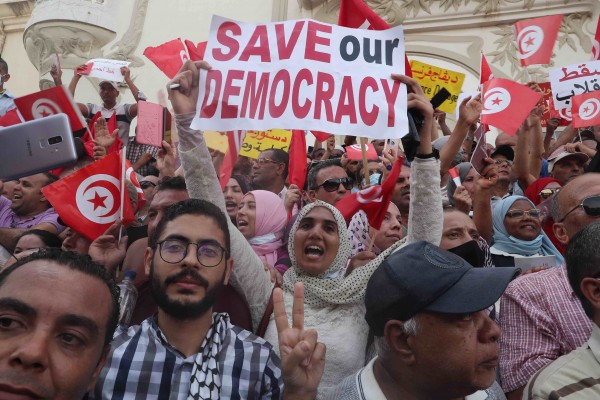