The Irrawaddy’s commitment to reporting despite junta’s repression

The Irrawaddy online newspaper has reported independently on Myanmar since its founding in 1993. Though the majority of this time was spent in exile, the Irrawaddy team gradually started making the return to Myanmar in 2012. By around 2016, the majority of staff members operated within the country and the outlet had even opened an office in Yangon. At the time, democratic forces were on the rise. But that hopeful period ended with the military coup in 2021. This October, the junta officially banned the outlet, which IPI called the latest attack on press freedom by the military regime.

Last year’s coup has led to a crackdown on Myanmar’s remaining free press. The military junta has undertaken huge efforts to silence independent journalism, and The Irrawaddy is no exception. IPI recently spoke with the outlet’s founder and editor-in-chief, Aung Zaw, about the consistent targeting of The Irrawaddy and the possibilities of continuing to do independent journalism in and about Myanmar.

From digital attacks, revoked licenses, and office raids to threats, arrests, and lawsuits, the attacks on The Irrawaddy are too many for Zaw to recall. In the most recent attempt, the military junta officially banned and revoked the license of The Irrawaddy in October, IPI reported. They were accused of damaging “state security, rule of law, and public tranquility”.

Fortunately, the ban has not had a practical effect on The Irrawaddy, Zaw says. Its website and social media channels are still up, and readers from inside Myanmar can still access the site’s reporting by using a VPN.

“The ban has not so much impacted our readership or the reporting. We are doing fine, we are doing absolutely fine”, Zaw says. 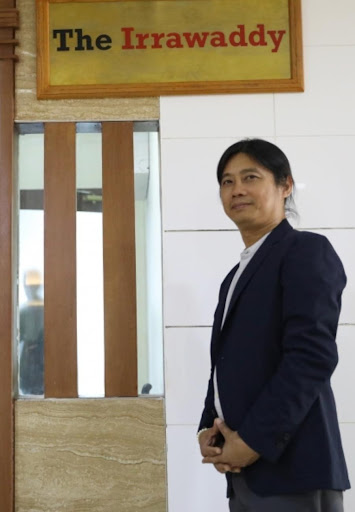 Aung Zaw at The Irrawaddy’s office in Yangon, 2019. The office was seized by the military regime in 2021. Photo courtesy Aung Zaw.

Still, Zaw said that the ban was unexpected.

“I was a little bit surprised by that because we stopped operating in the country after the coup. Our staff is all gone, they are all hiding”, he says. “But we have been hugely popular since the coup, more than before.”

While the ban may not be having a practical effect on The Irrawaddy’s work, the outlet and its staff have nevertheless faced a range of threats to their safety since the coup.

After the coup, The Irrawaddy’s office was raided and taken over by the regime. Staff members’ homes were also raided. Zaw recalls how he told his staff to leave the country, fearing for their safety. And the independent journalists who remain in Myanmar risk their life and safety to keep on reporting.

“A lot of journalists who remain in the country have to move from one place to another, hide in one place and another, but they keep working. They never fail to publish a story, and there is no weekend or holiday”, Zaw says.

Though the majority of the staff have been operating from outside the country since the coup, The Irrawaddy still keeps a limited presence within Myanmar.

“We still keep a one foot in and one foot out strategy”, he says.

Zaw sees a clear pattern in the regime’s attacks on The Irrawaddy. If the site publishes a critical story not to the junta’s liking, threats follow.

“I have faced some personal safety threats twice in the last year”, Zaw says. ”Sometimes you can relax and you have no threats coming to you. But sometimes, for certain reasons, for the stories that you published or comments that you publicly made, you are in danger.”

The different measures the military junta takes are not limited to journalists themselves, but also target their families as well others close to journalists and newspapers. It is common for family members to be placed under surveillance, Zaw says. Earlier this year, the military arrested their office driver and interrogated him at gunpoint.

Digital security in a surveillance environment

Digital security is another key challenge – both for The Irrawaddy staff and for contacts and potential sources in Myanmar.

“The military is very sophisticated. They use a huge budget to monitor the people and their communication”, Zaw says. “They listen to you. They have better devices and better equipment to track you down.”

The public, meanwhile, has little knowledge of digital safety and surveillance. For its part, The Irrawaddy has provided its staff with intense digital security training.

“If you don’t have basic digital security knowledge, it’s a huge risk”, Zaw says. “Media persons and opposition members have been caught again and again because they are using very unsafe tools and platforms. The other side, the regime, they just sit and watch.”

Facebook is the most common tool Burmese people use to communicate. Zaw stresses the risk of sources contacting journalists with sensitive information via certain apps.

“Burmese people use Facebook, Messenger, or Viber, the most sensitive information is being shared there”, he says. “Using Facebook Messenger means you are CC’ing your information to the military regime.”

For now, Zaw views the coup as the end of free journalism in Myanmar.

Zaw states that the choices journalists have to make now are between danger and compliance.

Arrests and releases: “I am not fooled”

Last month, the military junta released around 6,000 prisoners, including some journalists and political prisoners. While Zaw said he was glad to see the journalists freed, he added that the release followed a familiar pattern.

“I am not fooled by these releases”, he says. “The regime has been playing this game for 30 years. People get arrested and released. They do it to show that they are doing something, but nothing happens.”

The news was met with welcoming and encouraging statements from foreign states. But it remains clear that it is not a sign of a broader positive development. And what a prison release means in other parts of the world, does not carry the same meaning in Myanmar.

“Getting released from prison means you are getting released into a bigger prison, meaning the country. That is how Burmese people see it”, Zaw says.