The killing Monday of Maltese investigative journalist Daphne Caruana Galizia in a car bomb has sparked shock and outrage across Europe.

“The murder of a journalist in an EU member state is incredibly disturbing and underscores the dangers journalists everywhere face in their efforts to uncover wrongdoing,” International Press Institute (IPI) Executive Director Barbara Trionfi said Tuesday.

IPI has joined with press freedom, journalism and anti-corruption groups in Europe and around the world to demand justice for Caruana Galizia, who was unyielding in her efforts to reveal corruption and wrongdoing in the EU’s smallest member state.

Only when corruption is uncovered can action be taken to hold criminals to account. Anti-corruption activists work side-by-side with investigative journalists to shine a light into the dark world of corruption and advocate action to end impunity.

We call on the authorities in Malta to bring the perpetrators of this crime to justice. Those who expose corruption must be protected, not intimidated.

Caruana Galizia’s work included exposés of the shady secret deals, uncovered in the Panama Papers, that show how politicians and others hide illicit wealth behind secret companies.

Our thoughts are with her family.

“My mother was assassinated because she stood between the rule of law and those who sought to violate it, like many strong journalists. But she was also targeted because she was the only person doing so,” said Matthew Caruana Galizia, developer and data journalist at ICIJ.

“The murder of a prominent investigative journalist in broad daylight in an EU Member State underscores the seriousness of this crime. Daphne Caruana Galizia’s work as a journalist to hold power to account and shine a light on corruption is vital to maintaining our democratic institutions. Her killing is a loss for her country and for Europe”, Hannah Machlin, project manager for Index on Censorship’s data platform Mapping Media Freedom, said.

Daphne Caruana Galizia was killed when the car she was driving exploded in Bidnija around 15.00 on 16 October in what is thought to have been a targeted attack..

“The barbaric murder of Daphne Caruana Galizia is an attack on journalism itself. This crime is meant to intimidate every investigative journalist,” Dr Lutz Kinkel, Managing Director of the European Centre for Press and Media Freedom, said.

“Because Prime Minister Joseph Muscat and parts of Malta’s political elite were targets of Galizia’s disclosures, we strongly recommend an independent investigation of this case. The killers have to be found and put on trial.”

The blast left her vehicle in several pieces and threw debris into a nearby field. Half an hour before the powerful explosion, the journalist posted a comment about a libel claim the prime minister’s chief of staff had brought against a former opposition leader over comments the latter made about corruption.

Galizia filed a police report 16 days ago saying she was being threatened.

Galizia had conducted a series of high profile corruption investigations and has been subject to dozens of libel suits and harassment. Because of her research, in February, assets were frozen following a request filed by Economic Minister Chris Cardona and his EU presidency policy officer Joseph Gerada.

On 24 August opposition leader Adrian Delia filed a lawsuit against her over stories linking him to offshore accounts totalling to £1 million earned from alleged prostitution in London flats. On 11 March Silvio Debono, owner of the real estate investment company DB Group, filed 19 libel cases against her after Caruana Galizia published a number of articles about his deals with the Maltese government to take over a large tract of high value public land.

Galizia also conducted an investigation linking the Prime Minister Joseph Muscat and his wife Michelle to secret offshore bank accounts to allegedly hide payments from Azerbaijan’s ruling family, which were unveiled in the Panama Papers. She worked on this investigation with her son Matthew Caruana Galizia, a journalist for the Pulitzer prize winning International Consortium of Investigative Journalists, who has had his posts on allegations of wrongdoing by Prime Minister Joseph Muscat and his associates censored on Facebook.

On 17 October 2017, her family filed an urgent application for the Duty Magistrate Consuelo Scerri Herrera to abstain from investigating Caruana Galizia’s murder because of the court’s “flagrant conflict of interest”. In 2011, the magistrate initiated court proceedings against the journalist over comments she had made about Magistrate Herrera.

Seven reports of violations of press freedom were verified in Malta in 2017, according to Index on Censorship’s Mapping Media Freedom project. Five of those are linked to Caruana Galizia and her family.

We, the undersigned press freedom organisations call for: 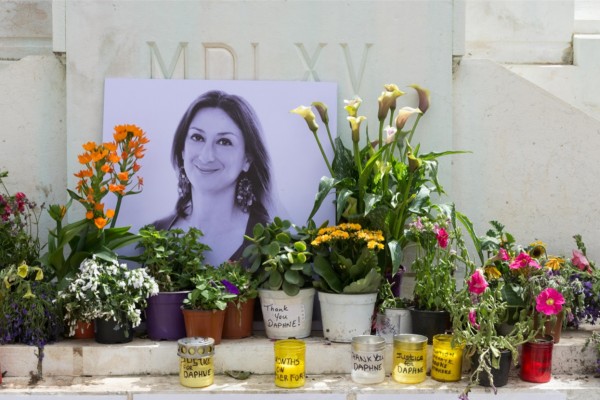