India’s Supreme Court ruled this week that the government could not pursue sedition charges against journalists merely for their criticism of the authorities. The International Press Institute (IPI) welcomes the decision as an important pushback against India’s increasing legal harassment of the press.

In a decision published on June 3, the Supreme Court, citing previous case law, said that “a citizen has a right to criticise or comment upon the measures undertaken by the government” as long as the person does not incite violence, a principle it said fully applied to journalists.

The Court delivered the ruling while quashing a sedition case against journalist Vinod Dua, who had been charged a year ago for his social media posts criticizing the government’s response to the COVID-19 pandemic.

IPI Deputy Director Scott Griffen welcomed the ruling and called for an end to the abuse of India’s sedition laws to harass the press.

“Journalists must have the right to scrutinize and criticize – however harshly – the actions of those in power”, Griffen said. “India’s sedition law has been increasingly employed as a tool to retaliate against critical journalists, and we welcome the Supreme Court’s move to push back against this dangerous trend. We call for all pending sedition charges against journalists to be dropped and for the Indian government to bring its laws in line with international standards.”

In a statement sent to IPI, The Editors’ Guild of India welcomed the judgement and called on the government to “repeal draconian and antiquated laws that find no space in a modern, liberal democracy”.

Police in India have resorted to rampant use of sedition and other laws to charge journalists for criticizing the government. Last October, IPI and the International Federation of Journalists (IFJ) called on Indian Prime Minister Narendra Modi to take “urgent action” to stop the use of sedition laws to threaten and silence journalists.

On January 28, six senior journalists were charged with sedition for reporting on an alleged shooting by police officers during a tractor rally coinciding with India’s celebration of its 72nd Republic Day that led to the death of a farmer.

On January 30, police in Uttar Pradesh filed a first information report (FIR) against The Wire founding editor Siddharth Varadarajan for tweeting a story from The Wire that included statements given by the family of the farmer who died during the tractor rally. A day later, The Wire and one of its staff members, Ismat Ara, were added to the FIR.

On the same day, two other journalists, Mandeep Punia of Carvan Magazine and Dharmender Singh of Online News India, were detained by the police while on assignment covering the farmers’ protests near the village of Singhu, just outside New Delhi. They were charged with obstructing law enforcement officials. Both have now been granted bail.

Yesterday, police in the south state of Telangana arrested Jangi Raghu, a journalist working for a YouTube news channel called Tolivelugu as he stepped out of his house to buy groceries and charged him with participating in riots that took place in February. He was produced in the court and was remanded to 14 days in judicial custody. 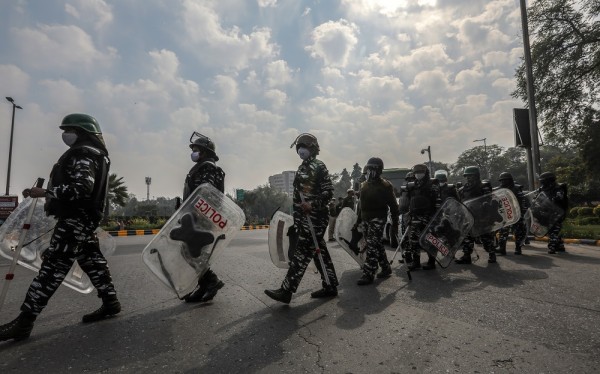 India: Authorities should drop criminal complaint against The Wire and two journ...