Constant surveillance by authorities has forced journalists to self-censor

For the past one-and-a-half years, Indian-administered Kashmir has been under a blanket of restrictions. In August 2019, Prime Minister Narendra Modi’s government repealed the region’s special autonomous status and split the state of Jammu Kashmir into two union territories: Jammu and Kashmir; and Ladakh.

To curb protests against the decision, the government imposed severe restrictions and arrested politicians, human rights activists and journalists. Internet service to the newly formed union territory was blocked, and was only partially restored in January 2020. Journalists in Kashmir were able to access the internet to file their reports only through a government-controlled media centre.

The unprecedented restrictions on journalists stifled press freedom in the region, as IPI reported in early 2020. Many journalists faced charges and some of them were arrested for their reporting.  The harassment by security forces, directly controlled by the Bharatiya Janata Party (BJP)-led federal government, sparked widespread condemnation.

However, the restrictions have continued unabated, and the government has now taken further steps to silence independent media in Kashmir. The recent decision of the Jammu and Kashmir government to deny state advertisements to over two dozen newspapers, a substantial source of revenue for these outlets, has delivered a crippling blow to press freedom.

“You probably won’t hear even 10 percent of the truth in news about Kashmir”, Gowhar Geelani, a Kashmir-based independent journalist and author, told the International Press Institute (IPI) in a recent interview. According to Geelani, journalists in the region have been forced to limit themselves in terms of what they are writing about. “Nowadays most of the newspapers are full of articles based on government’s statements”, he said. “Some editors have decided to go on to government’s side so they would not lose the advertisements. They are now the government’s PR offices”. 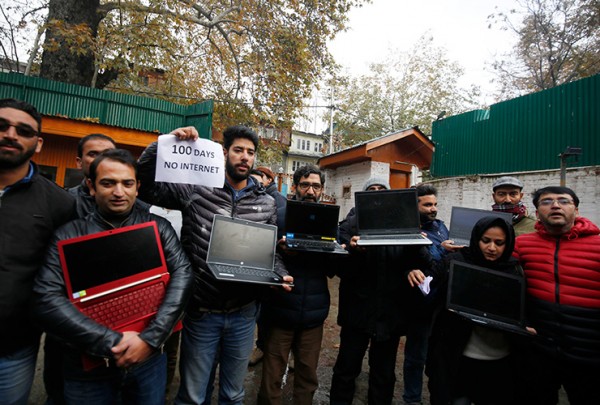 Kashmiri journalists holding placards and laptops during a protest against the ongoing internet blockade in Srinagar, Indian Kashmir, on Nov. 12, 2019. EPA-EFE/FAROOQ KHAN.

Although Geelani expressed dismay about the remarkable change in the local media landscape, he said he doesn’t want to blame his colleagues. The Indian government has recently put more and more pressure on the media in Jammu and Kashmir. In January, the authorities barred more than 30 outlets from state advertising. The ban is part of the regional government’s new media policy to “thwart mis-information, fake news and be alert to any attempts to use the media to incite communal passions, preach violence, or to propagate any information prejudicial to sovereignty and integrity”. It also allows authorities of the region to suspend advertisements from every media which somehow violates the “desired” standards of the government.

The bans pose a serious challenge to press freedom and the viability of independent media in the region. Newspapers in Kashmir rely significantly on revenue from government advertisements, and as this income disappears, the only option is to either lay off journalists or in the end even close down the business. “The majority or at least many journalists are now jobless”, Ishfaq Tantry, a Srinagar-based journalist and the general secretary of Kashmir Press Club, told IPI. He said the industry decline started in August 2019 and has worsened because of COVID-19. The situation has been very difficult for the big and vibrant community of reporters in the area, Tantry said.

The lack of advertisement that has led to financial hardship is just another piece of evidence showing how the Indian government has tried to limit the work of local media. For the past couple of years journalists have faced continuous harassment, and since August 2019 dozens of legal cases have been brought against journalists. Last week the local police filed an FIR (“First information report”, an initial report of alleged criminal action) against two Kashmiri online news portals, The Kashmir Walla and Kashmiriyat. The cases were registered after the military had accused the outlets of publishing “fake news” that claimed a Kashmiri school had been forced to hold a Republic Day function.

Authorities also intimidate journalists with unexpected summons or home raids. Sometimes raids last for hours and journalists’ personal mobile phones, notebooks and laptops are seized. “With that they want to send a signal to others. They know it will have a certain kind of effect on me and the others”, a local journalist, who requested anonymity, told IPI. Many other journalists with whom IPI was in contact declined to speak on the record about the subject, saying that authorities keep an eye on them and even one wrong word might lead to a legal case against them.

“There is so much fear. We don’t know what we can do. Instead of fight mode we are in freeze mode”, Geelani said. “With every sentence you write you have to think if it will have some consequences.” In April 2020 Geelani was charged with “glorifying terrorism in Kashmir Valley”, which meant he could have been jailed for up to seven years. He said it’s still unclear on what basis the case was filed, which says a lot about the procedure of local authorities.

A new kind of fear 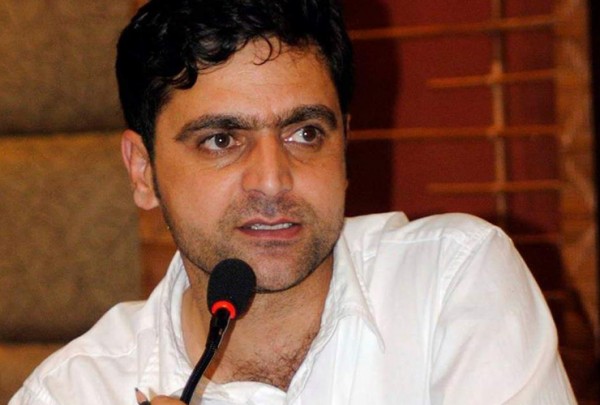 The constant surveillance by authorities has forced journalists to practice self-censorship and as a result there is a lack of critical stories. Geelani, who currently contributes to the German public international broadcaster Deutsche Welle, said that to avoid scrutiny, he needs to write many softer stories, for example on cricket or tourism, to be able to write one on politics or human right issues. “I am not free, and I feel guilty. This is not the kind of journalism I used to do.”

Geelani was born and raised in Kashmir, where he also started his career as a journalist around 15 years ago. Later he moved to Germany for almost a decade but returned to India to write a book about the territory, which was published in 2019 just before the government’s move to end the autonomy of Kashmir.

“It’s never been like this before. Journalists are facing a new kind of fear”, Geelani said. According to him, the past two decades before August 2019 had been more or less calm, although the region has been under dispute since India’s independence in 1947 and doing journalism in the area has always been anything but easy. Geelani feels that now journalism in the area is considered a crime and that the atmosphere of constant fear and surveillance has killed journalism in the area. “We were already in lockdown before COVID-19”, he said.

During the pandemic it’s been difficult for local journalists in Jammu and Kashmir to access valid and reliable information. Internet in the area has been limited to 2G after having been banned completely for the six months in 2019. Faster internet is a privilege that only a few people can afford. “It takes me three times longer to write an article that it took before”, another journalist who requested anonymity told IPI.

From time to time the Indian government cuts off the internet to “avoid chaos” in certain areas. In 2020 internet connections were suspended 83 times. In Kashmir it was blocked on  January 26, when India celebrated its 72ndRepublic Day. Connections were restored 18 hours later.

Due to constant problems with the internet, for Geelani the only way to access reliable information about the coronavirus has been to go from one hospital to other to observe the situation and find alternative sources when even health authorities have been prohibited to connect with media. “The same bureaucrats of the region gave all the information about the epidemic without any idea of science”, Geelani said.

The intimidation of journalists doesn’t just affect Kashmir media professionals but also their families. Geelani and others told IPI that they have often thought of changing their profession. Geelani himself wanted to go back to Germany to work at Deutsche Welle, but because of the August 2019 travel ban he has been forced to stay in India. “The judicial process is a punishment in itself and it takes a heavy toll on you psychologically as well as financially”, he said. Geelani added that many journalists are now working on half their salaries, which barely gives them enough to put food on the table. “As journalists and storytellers we don’t want to become a story. We don’t like to talk about us. We want to tell the stories of the dispossessed and marginalised.”