Increasing threats and violence against journalists in the Netherlands

A car in flames in front of the station in Eindhoven, the Netherlands, 24 January 2021. EPA-EFE/ROB ENGELAAR

The International Press Institute (IPI), a global network of editors, media executives and leading journalists for press freedom, today expressed serious concern over the recent increase in threats and violence against journalists in the Netherlands.

Over the past few days, several journalists and TV crews have been threatened, insulted or physically attacked by groups of rioters as they covered unrest sparked by the Dutch government’s newly imposed coronavirus curfew restrictions.

On Sunday, a reporter from the daily newspaper Brabants Dagblad was pelted with stones and chased by a group of young protesters in Tilburg. The same day a cameraman and reporter Jan Peels from Omroep Brabant also had stones thrown at them by rioters in Eindhoven.

In Enschede, a freelance press photographer working for daily newspaper Tubantia was hit and kicked in the shin when she was trapped and then confronted by rioters. During the attack, one man tried to steal her camera and another called her a “cancer journalist”.

A 39-year-old man from Almere was arrested for posting a viral video threatening photographers and journalists who had reported on the recent riot on Museumplein in Amsterdam on Sunday, saying that they should resign or flee abroad or be harmed.

On Saturday evening, a TV crew for the public broadcaster NOS also faced intimidation and obstruction from a group of young people as they tried to film a coronavirus test centre which had been burnt down. During the incident, the security guard accompanying the crew was sprayed in the face with a corrosive substance during an altercation.

Violence continued on Monday night when two photographers from Haarlems Dagblad, Laurens Bosch and Michel van Bergen, had stones thrown in the Schalkwijk district of Haarlem. Bosch was chased, hit on the head by a stone and had to seek refuge in a riot police van. The same night, a photographer and cameraman from Inter Visual Studio were targeted by fireworks as they reported from Amsterdam.

In response to the violence, Thomas Bruning, general secretary of the Dutch Association of Journalists (NVJ) has called for an end to attacks on journalists, cameramen and photographers adding: “It is not normal for journalists to have to go out with security guards”. Other journalists have reported having to wear helmets and protective gear for the first time in their careers.

These instances of violence and threats are the most visible examples yet of a rising anti-press sentiment within certain segments of Dutch society – a trend particularly jarring in a country which enjoys one the highest levels of press freedom in the world and is known for its defence of independent journalism on the global stage.

During COVID-19, a mix of increasing polarization, populist politics, fraying trust in mainstream news sources and conspiracy theories about the role of the media during the pandemic are contributing to growing anti-press sentiment stewing in far-right social media networks, leading to threats against journalists both online and on the streets.

In 2020, monitoring groups in the Netherlands charted a significant increase in threats and acts of aggression against journalists, with figures nearly trebling on the previous year from 52 to 141. While this may in part be down to the success of the new PressVeilig (Press Safety) hotline – a joint initiative of the NVJ, the Association of Editors-in-Chief, the Police and the Public Prosecution Service – editors have still noted a clear increase in hostility.

After the weekend’s riots, Marcel Gelauff, editor-in-chief of NOS News, stressed the threats against his journalists were part of a larger tend: “The safety of journalists and technicians has been an issue in journalism for a number of years and is increasingly a social issue.”

“The working conditions of journalists are under increasing pressure. The examples are well-known: making the work literally impossible, threatening, intimidating, framing, deliberately spreading lies, calling names, especially online”, he added. “As an editorial team, we spend more and more money on our security… That is money that we cannot spend on our journalism assignment. Quality independent journalism has its price.”

NOS has taken much of the brunt of this growth in aggression towards media during the pandemic. In October 2020, Gelauff announced the broadcaster had removed its logos from all satellite vans due to persistent threats made against the equipment and employees.

These have included verbal abuse of journalists and technicians, garbage being thrown at the vans and roads being blocked to stop the crews from travelling, he added. On other occasions, NOS has had broadcasts interrupted by people banging and urinating on the side of its vans.

On other occasions journalists covering and debunking conspiracy theories online, such as Jerry Vermanen, a data and investigative journalist for Pointer, have been targeted with a barrage of insults and threats on Twitter related to their work. A number of messages included explicit threats and efforts were made to hack the social media accounts of both him and his wife.

Physical threats against other journalists, while still uncommon, have become increasingly alarming. In late December 2020, a hand grenade was found outside the house of De Limburger newspaper crime reporter Jos Emonts and had to be handled by the Explosive Ordnance Disposal Service Defense (EOD).

While the motivation was unclear, De Limburger editor-in-chief Bjorn Oostra said at the time it was likely connected to the journalist’s work and described it as “an attack on the free press and independent journalism”. 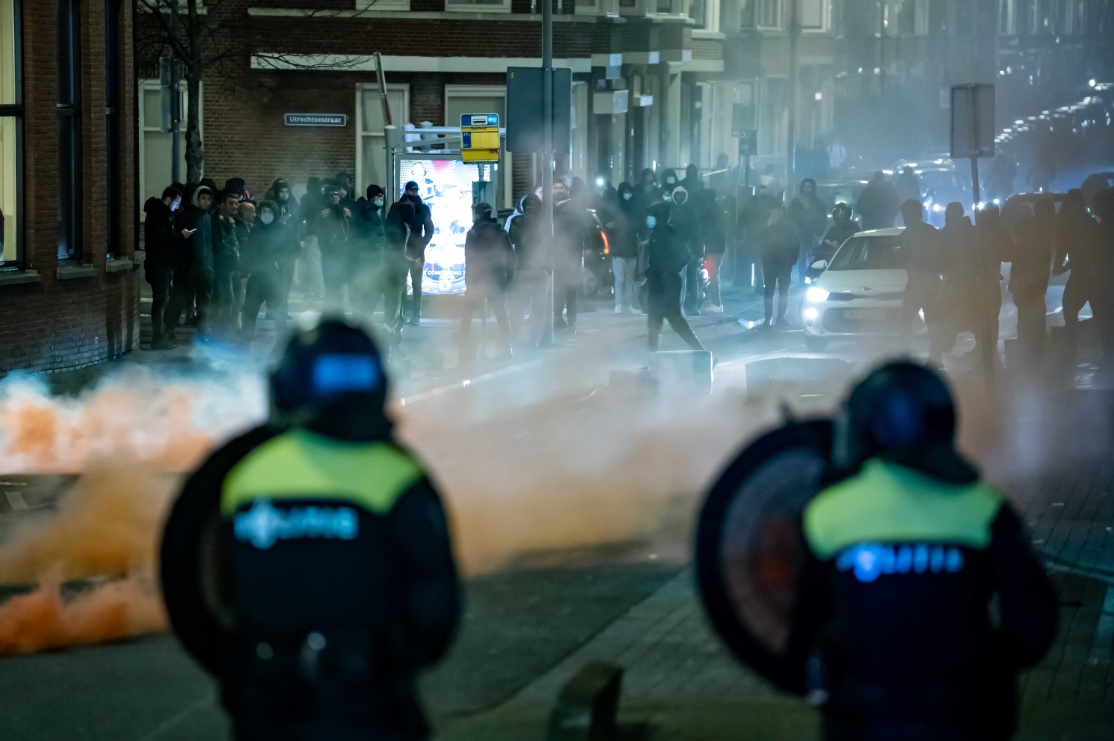 A large group of young people pelts the police present with stones and fireworks in Rotterdam, The Netherlands, 25 January 2021. EPA-EFE / Killian Lindenburg / MediaTV

After the weekend’s riots and attacks on the media, Bruning from the NVJ made a pointed call to right-wing politicians including Thierry Baudet, founder and leader of Forum for Democracy (VVD) and Geert Wilders, leader of the Party for Freedom (PVV) to “make it clear how important the role of journalism is”.

The leaders of both right-wing and far-right parties have been accused of using the pandemic to fan the flames of online conspiracy theories, COVID-19 denial and distrust of establishment politics and mainstream Dutch media. The Almere man accused of threatening harm against journalists was a former candidate councillor for the VVD, Ronald Laken.

It mirrors a clear trend observed by press freedom groups including IPI throughout the pandemic: journalists being attacked by members of far-right and conspiracy-theory groups during coverage of protests over government lockdowns or COVID-19 measures.

According to IPI’s COVID-19 tracker, while numerous journalists were attacked at anti-lockdown demonstrations in the first wave between March and May 2020, incidents had become more frequent and severe in recent months, raising growing concerns about the safety of journalists and the willingness of editors to send reporting crews into the field.