This piece is published in collaboration with HVG as part of a content series on threats to independent media in Central Europe. Read more.

How is it possible that Hungary has improved in the Reporters Without Borders’ world press freedom rankings, yet the media is worse off? The solution is simple: in recent years, the Orbán regime has been strangling not the remaining free press, but its own media, so that the government’s message could dominate public discourse unhindered.

For one third of Hungarian citizens, the only news they are reached by consists of the Orbán government’s worldview, the arguments of its politicians and the facts it has carefully filtered. This is how Gábor Tóka, an expert in public opinion polls, draws on research to define the circle of those excluded from independent information.

So, if the government claims that nowhere else has been as successful as in Hungary in controlling the epidemic, then one in three citizens will hear this claim, but they will not be informed that in fact the Hungarian health system has the world’s worst record in terms of mortality per capita.

This huge bubble is the decisive reason for the electoral success of the Orbán government, according to politicians and observers alike. The media governance system is now in place. Orbán is perfectly responsive to any challenge.

The most recent example of this was Russian President Vladimir Putin’s war of aggression. The Hungarian prime minister was caught unaware by Russia’s invasion of Ukraine at the start of the campaign for the Hungarian parliamentary elections. Moreover, Orbán is a close ally of Putin, for whom he has done many favours and against whom he has put his country in debt.

In theory, the war would have hurt Orbán’s chances of re-election. Instead, the machine worked: in a matter of days, the fears of the Hungarian people were assessed, and a slogan was invented, which was a lie, but still spread on every surface.

“Orbán is a guarantee of peace, but the opposition would send soldiers to die in Ukraine” – that was what was said everywhere, and the Hungarian state was involved in spreading this message. And now we can measure the effectiveness of the messages.

Even a significant proportion of opposition voters accepted as credible the unfounded or false claims made by the government about the opposition during the campaign, according to research by the Dimenzió Média Alapítvány.

The Foundation’s study, developed in collaboration with Závecz Research and Mérték Média Műhely, sought to find out how effective political propaganda is and to what extent it succeeds in manipulating the masses.

The analysis, carried out in the last days of the campaign on a representative sample of 1,000 voters, showed that a wide range of voters were exposed to false political messages and were not convinced of their veracity because of the one-sided state information. 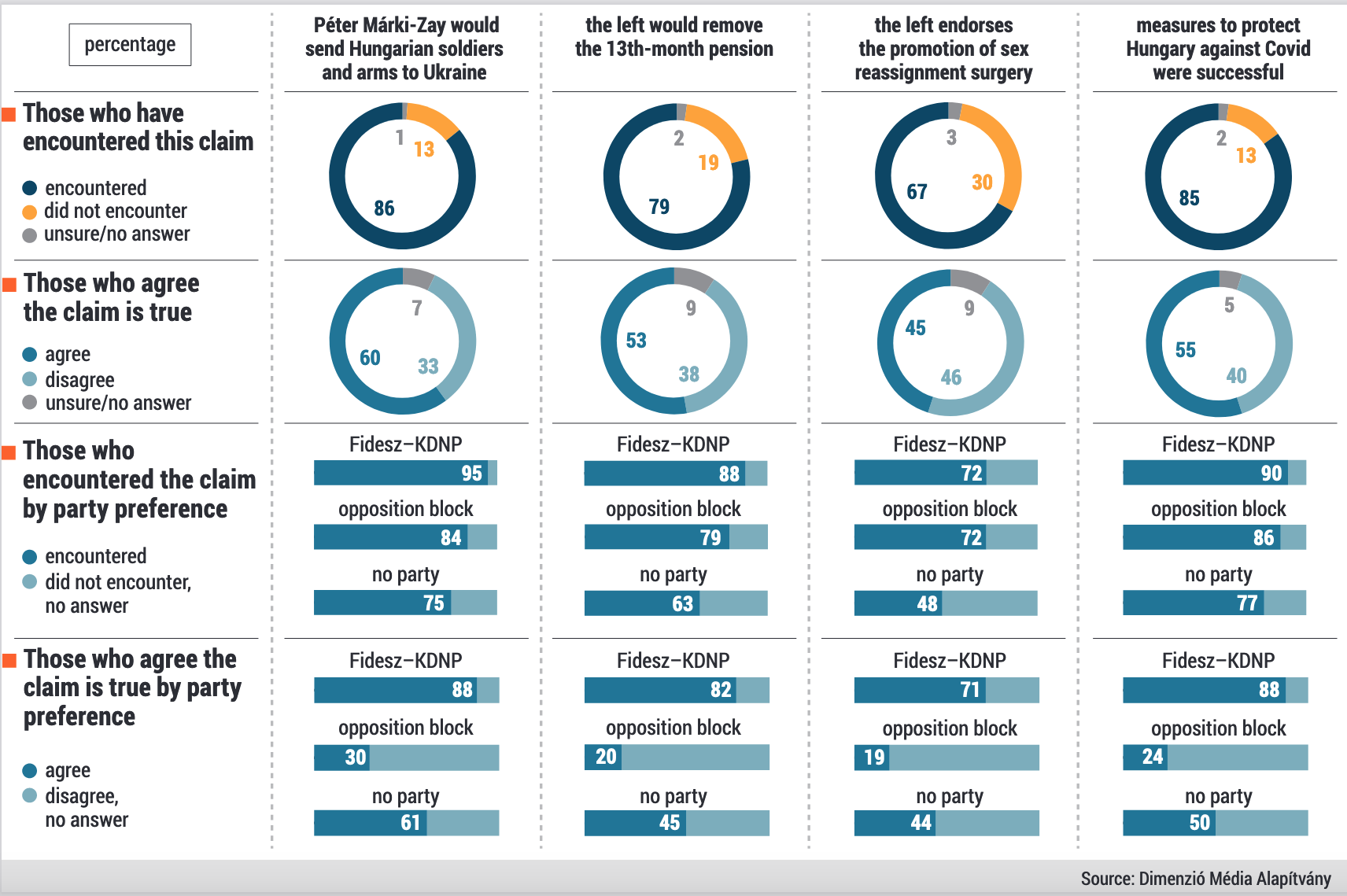 For example, the statement that Péter Márki-Zay would take the country to war, produced by Fidesz’s propaganda workshop and broadcast by the public media, was believed even by 30 percent of opposition voters. And among those without a party allegiance, twice as many believed the character assassination attempt allegation against the opposition’s candidate for prime minister.

The survey showed that in Hungary, citizens’ fundamental right to be informed free from influence is seriously undermined by the media system established since 2010, whose ownership structure and state-controlled advertising spending are both determined by the political interests of the government.

As Ferenc Vicsek, one of the authors of the report, puts it, “it is impossible to talk about free and democratic elections where a significant proportion of citizens, a proportion that has a significant influence on the election, do not encounter messages from some of the political contestants, including those that are refuting the the false claims being spread about them”.

The fact that the rebuttals do not reach a part of the electorate is a striking testimony to the particular asymmetry of the Hungarian media system.

This summer, the Orbán propaganda machine faces its most difficult task yet. It has to explain why it is doing exactly what it attacked the opposition for.

During the campaign, Fidesz accused the opposition of planning significant cuts to overheads subsidies – and voters believed the ruling party. Now it is Orbán who will make the move. While the first raised bills are being written, the prime minister is still lying about protecting the people from the cost of living.

Why is it that former British Prime Minister Boris Johnson has finally fallen after all the lies he spread, while ex-US President Donald Trump is not losing his fan base and Orbán has his country under his complete control? One of the most obvious answers is the media’s ability in those countries to inform as many people as possible in an objective way. In Britain, this media coverage seems to be provided; in the United States it has been eliminated in conservative circles; while in Hungary media capture has effectively disrupted the media’s ability to inform the population.

Countries concerned about protecting democracy should learn from this and protect media pluralism – before other Orbán-style figures follow his model.