This piece is published in collaboration with Telex.hu as part of a content series on threats to independent media in Central Europe. Read more

Regardless of viewership, popularity, or readership, the government gives preference to pro-government journalists and their media outlets during its regular press conferences. Critical media outlets, such as Telex, are left standing at the back of the line. This became clear when we carefully looked through all the government briefings in 2021 and noted the order in which journalists present were addressed by the politicians leading the events.

In Hungary, the newspapers, TV channels, and radio stations that have no connections to politics or politicians and do not belong to a government-affiliated group of shareholders, such as KESMA (Central European Press and Media Foundation), find themselves in a relatively difficult situation when it comes to getting answers to important questions of public interest from the government.

There are hardly any opportunities left in Hungary for journalists to freely and publicly ask government officials about anything. But the government briefing, an event held on average once every two weeks, is one of them. It takes place on Thursdays, and in 2021 there were 32 such sessions. Most of the events were led by the Head of the Prime Minister’s Office Gergely Gulyás and government spokesperson Alexandra Szentkirályi.

We were curious: Does the government have a preference order among media outlets? Who do they like to call on first at the government press conferences?

That’s why we have carefully reviewed all the government briefings in 2021 and noted the order in which journalists were called on for all 32 occasions.

The calling order is important at these occasional government briefings because every newspaper and TV station has different focal points, which they like to inquire about in a particular way (e.g. as a softball question or in a critical manner, bringing up many points of view).

The graphics below illustrate the average order in which media outlets were allowed to ask questions at government briefings last year. The figures include media organizations that showed up to at least 10 of the 32 government briefings last year. M1, Magyar Nemzet, which has tens of thousands of readers, and Origo lead the ranking. At the bottom are Telex, 444, HVG, Azonnali and Magyar Hang. 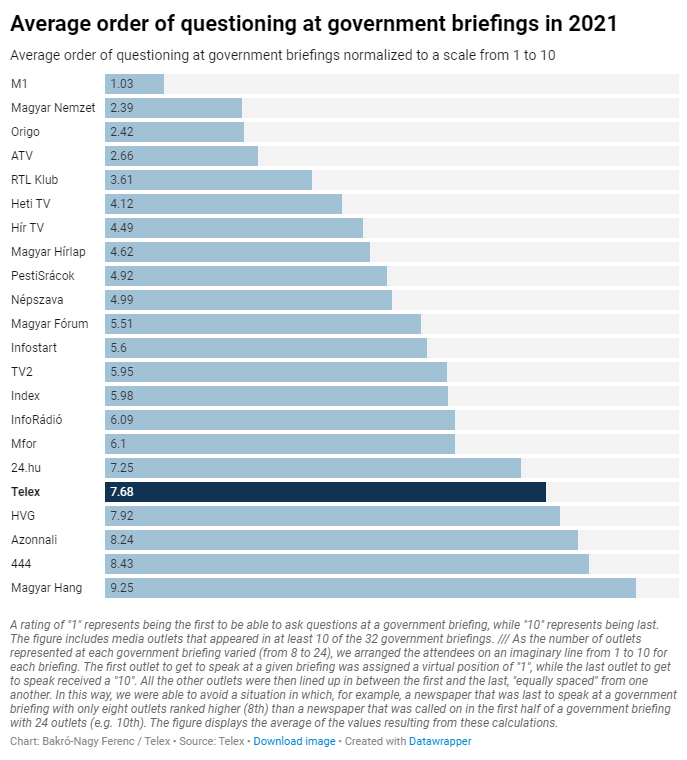 The event is carried out such that journalists from the newspapers present can ask several questions, and they can keep the floor for as long as the politician leading the government briefing allows. In 2021, there is a clear majority of pro-government publications in the top ten places with respect to the order in which they are called on.

Any journalist permitted to attend the event is allowed to ask questions, and it’s rather unusual for someone not to get called on. However, it is also true that some people are simply not allowed in: in 2021, there were several occasions in which the staff of the civic weekly newspaper and web portal Magyar Hang registered in vain, as they were ultimately denied entrance.

On the other hand, journalists are often told that the politician holding the event claims to be unqualified and cannot (or does not want to) respond – which is problematic simply because this is the only event where the media that aren’t pro-government are free to ask questions. If they don’t get an answer at the government briefing, the outlets are left to reach out to government and state departments by email or by phone and ask questions, and the government is rather erratic about responding to these requests.

Last year, we wrote about an interesting example that happened with Telex. During the first hundred days of Telex’s existence, we sent a total of 52 different requests to Hungarian ministries, and for nine of them did we receive a response. In all the other cases, they didn’t even consider us worthy of a reply. 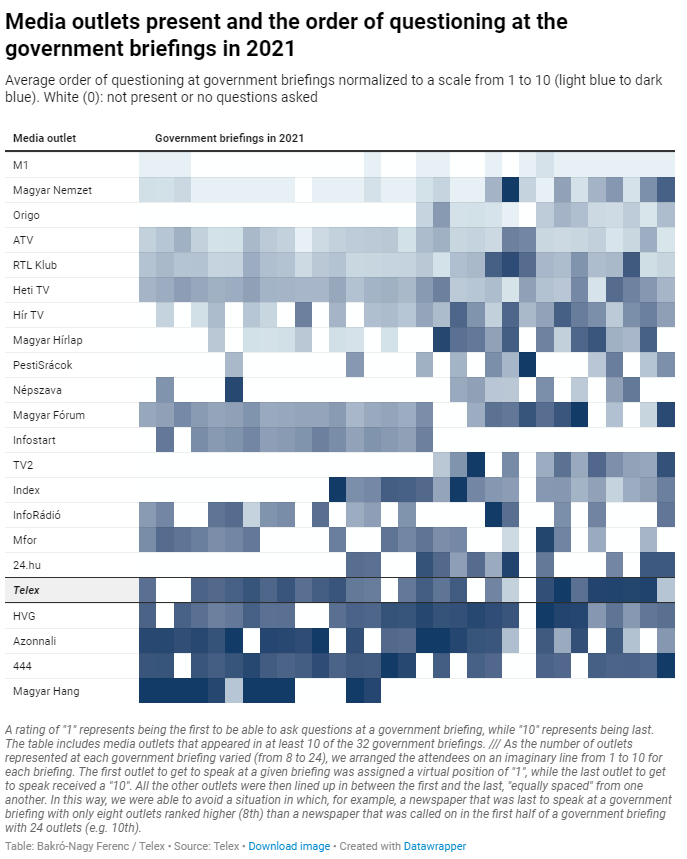 According to the latest report by the international journalists’ organization Reporters Without Borders (RSF), Hungary’s media space is highly polarized due to political influences. Further, the state of press freedom in Hungary has continued to deteriorate over the past year. In 2021, Hungary was ranked 92nd in the world, down from 89th in the previous ranking. In the European Union, the state of the press is worse only in Bulgaria, while European countries such as Albania, Moldova, and Northern Macedonia are ahead of us.