How can journalists in Belarus carry on reporting in extreme conditions? How can international organizations support Belarusian media? And what is the future of journalism in the country, which is currently facing a severe crackdown on media?

On November 23, 2021, five journalists and media freedom advocates discussed these questions during the panel discussion “Reporting against all odds: Journalism in Belarus today” jointly hosted by IPI and ARTICLE 19. Their key takeaway: international support is essential to the future of Belarusian media. Support is needed both for independent journalists still in Belarus and those in exile.

Opening the event with these simple yet painful statistics, IPI Deputy Director Scott Griffen, the panel’s moderator, illustrated the severe crackdown of the media in Belarus since August 2020.

Starting the discussion, Hanna Liubakova, a Belarusian freelance journalist, explained the crackdown on Belarusian media in more detail, by outlining how the regime has increasingly criminalized journalism since the 2020 protests, applying arrests, violence and raids of independent media. “Now there’s a practical disappearance of journalists in Belarus”, Liubakova stated. “The government is depriving journalists of accreditation, there are no foreign journalists anymore.” A “disastrous situation”, she said, and added: “Once independent information is fully destroyed, it is very easy for foreign countries to spread their propaganda and narratives in Belarus.”

The media crackdown has led to most journalists leaving the country, the Belarusian investigative journalist Stanislau Ivashkevich pointed out. Those that stay face repression and detention.

Despite having left the country, many of these journalists still report on Belarus from abroad, Ivashkevich said. They do so with help from citizen journalists and officials sympathizing with independent media, who send material. “But such exile journalism also comes with severe difficulties, like shooting videos and getting guests in front of the camera”, he noted. Reporting from abroad is much more costly and difficult than in-country journalism, Ivashkevich pointed out. For example, extra researchers need to be hired. “This brings these journalists under a great financial strain.”

The Belarusian authorities have increasingly used anti-extremism and anti-terrorism laws to silence information channels since the protests, Joanna Szymanska, senior programme officer for Europe and Central Asia at ARTICLE 19, explained. Such channels are blocked by Belarusian authorities and cannot be accessed without circumvention, such as the use of a VPN.

It’s not just journalists who are at risk from such moves. Viewers have started to unfollow popular Telegram channels, afraid of criminal prosecution. “Obviously, not everyone is ready to take risks to follow these channels”, Szymanska said. “There are already well-known media outlets on this list and we can only expect the list will be growing. Obviously this will have a chilling effect on freedom of expression.”

What can help journalists?

Teresa Ribeiro, the OSCE representative on freedom of the media, said that her office has tried to carry out dialogue with the authorities. But this dialogue, she said, had been a “failure” as her proposals were not accepted by the Belarusian government. “Therefore I try to combine this institutional approach with public interventions in order to point out the situation with the government” and urge it to take responsibility and protect journalists, she said.

Harazti agreed that international organizations should publicly pressure the Belarusian authorities. “And it is important to always name the victims of the media crackdown in Belarus. Not behind closed doors, but in public”, he said. “This might not solve the situation for those oppressed, but it makes them visible, and it shows Lukashenko they cannot get away with oppressing them. It is about living people, after all.”

Besides dialogue and public pressure, international organizations and governments should build up a special emergency program to support journalists in Belarus, Liubakova said. This program should provide well-targeted support – including creative ways to deliver the support as necessary – to both Belarusian journalists still in the country, as well as exile media. Those who have left the country also need relocation support. “Let’s imagine how difficult it is to open a bank account in Lithuania, get a visa or register an outlet abroad”, she said.

Upholding the structure and knowledge of Belarusian journalism abroad is key for the future of media in the country, Ivashkevich said. “Only by sustaining Belarusian media outlets, can we bring journalism back to Belarus and reinvent journalism. Once you lose the core team, it is much more difficult to uphold independent journalism in Belarus. It is therefore important for our international friends to keep supporting this.”

The reliance on citizen journalists for this system demands new, creative technological strategies, the panelists agreed. “Witnesses from within the country need technological security to help deliver information to journalists in exile”, Liubakova said. In addition, the Belarusian audience needs technological tools, for example VPNs, to safely receive information, even when that information is marked as ‘extremist’, Szymanska added.

On Griffen’s last question whether there is also hope, Liubakova stated that there is still a lot of optimism and resilience amongst Belarusian journalists. “There is a lot of solidarity between us, all together, there always has been a war against journalism. We are used to surviving.” Her most important message: “Let’s invest in Belarusian journalism, so that we won’t lose it.” 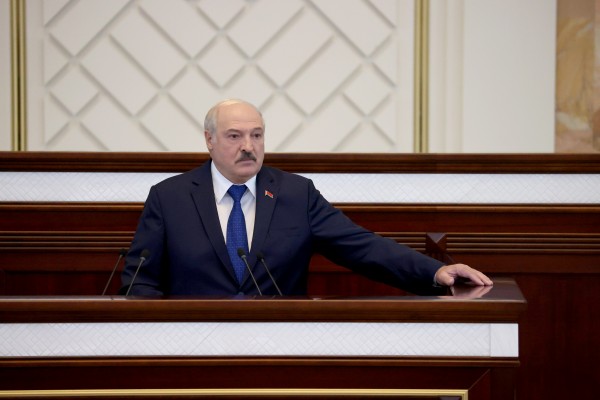