The International Press Institute (IPI) today joined a coalition of seven other media outlets and civil society groups based in Europe in launching a new publication aimed at strengthening quality media coverage of migrants and ethnic and religious minorities.

Reporting on Migration and Minorities: Approach and Guidelines reflects the conclusions of working seminars held in seven countries in the of 2017 and the input of dozens of experts. The guidelines – which are supplementary to standards already in place at news outlets – identify current practices in news coverage that contribute to a narrow public understanding of issues related to migration and minorities and offer corresponding recommendations.

The guidelines form part of the RESPECT WORDS project, which aims to promote quality reporting on migrants and ethnic and religious minorities as an indispensable tool in the fight against hate speech.

Guests at today’s launch included Greek MEP Konstantina Kuneva, a Bulgarian immigrant to Greece who was badly injured in a vicious acid attack in 2008 while working as a labour-rights activist. Kuneva addressed the gathering on her perception of Greek media coverage of the attack in the context of her immigrant background.

Another MEP, Istvan Ujhelyi of Hungary, spoke to participants about the current situation in Hungary, where particular concern has been raised over media coverage of refugees. Ujhelyi addressed ways in which the EU could work work to counter hate speech. 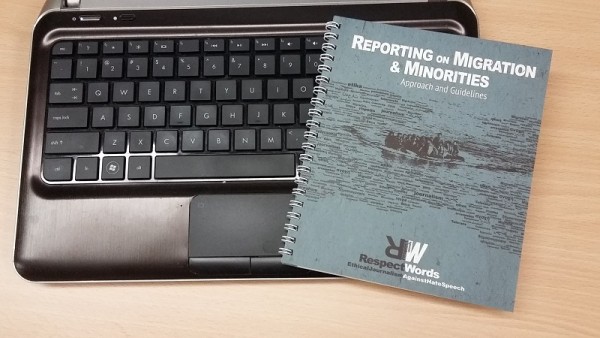 In addition to the guidelines, the project also involves the creation of an interactive online map of European best practices in order to highlight positive initiatives in the areas of journalism, culture and integration related to migrants and minorities.

Beginning in the autumn of 2017, the partners will also lead a Europe-wide radio campaign intended to combat hate speech.

A PDF version of the guidelines in English can be downloaded on the RESPECT WORDS website, and will shortly be made available in Hungarian, Greek, Irish, German, Italian, Slovenian and Spanish.

To request additional information about this project, or to request hard copies of the reporting guidelines, please contact info@respectwords.org.