Ethiopian journalist and blogger Eskinder Nega, who has been imprisoned since 2011 after criticising his country’s abuse of anti-terror laws to silence the press, has been named the International Press Institute (IPI)’s 69th World Press Freedom Hero.

IPI also announced today the Afghan Journalists Safety Committee as the recipient of the 2017 Free Media Pioneer Award in recognition of the group’s courageous and trailblazing work to prevent, combat and monitor attacks on journalists in one of the world’s most dangerous media environments.

Both awards, which for the past three years have been given in partnership with Copenhagen-based International Media Support (IMS), will be presented during a special ceremony on May 18 in Hamburg, Germany during IPI’s annual World Congress and General Assembly.

Nega has spent over 2,000 days behind bars since his arrest on Sept. 14, 2011, when Ethiopian authorities accused him of “leading a plan to throw the country into serious political chaos through a series of terrorist acts” and linked him to a banned opposition group. His jailing came shortly after Nega, a persistent critic of Ethiopia’s former long-time ruler and then-Prime Minister Meles Zenawi, published a column questioning the government’s abuse of anti-terror laws to punish journalistic scrutiny.

Nega’s comments were preceded by a wave of detentions under Ethiopia’s broad 2009 anti-terror law, including those of journalists Woubshet Taye and Reeyot Alemu – the 2013 recipient of the UNESCO-Guillermo Cano World Press Freedom Prize – as well as Swedish correspondents Martin Schibbye and Johan Persson.

An Ethiopian court convicted Nega in June 2012 of “participation in a terrorist organization” and “planning, preparation, conspiracy, incitement and attempt of (a) terrorist act”. He was sentenced to 18 years in prison the following month, a decision the U.N. Working Group on Arbitrary Detention later said violated international law.

IPI Executive Director Barbara Trionfi said the award was a recognition of Nega’s “unflinching dedication to the free exchange of ideas and information and his determination – at the expense of his freedom and separation from his family – not to remain silent in the face of the Ethiopian government’s cynical attempt to use the fight against terrorism to crush legitimate dissent”.

She continued: “This award sends the message that Eskinder Nega’s bravery in relentlessly scrutinising power despite years of intense retaliation has not been forgotten. We renew our call on Ethiopia to free Eskinder and all journalists jailed for doing their jobs or expressing their opinions, and we urge the international community not to ignore Ethiopia’s continued flouting of its international human rights obligations”.

Nega faced frequent official pressure and harassment due to his writing beginning in the early 1990s. In 2005, he and his wife, journalist Serkalem Fasil, were jailed on treason charges for their coverage of a mass government crackdown on popular protests following disputed parliamentary elections won by Zenawi’s Ethiopian People’s Revolutionary Democratic Front (EPRDF). Fasil would later give birth to a son behind bars. Authorities released the couple in April 2007 but shuttered their publishing company and banned Nega from practicing journalism.

Fasil, who now lives in exile in the United States with their son, said of IPI and IMS’ recognition of her husband that it was “absolutely heart-warming to know that all his sacrifices and valuable contribution to press freedom are not wasted in vain, but continue to shine a spotlight [on his plight] on the global stage”.

She added: ”Although, it remains a bittersweet moment for me (knowing where he is now), it is important to uphold such recognition for the tremendous impact it’s having to those who aspire to follow in his footsteps. … I truly hope it also expedites his release from imprisonment and brings an end to his suffering.”

IPI and its members have previously called for Nega’s release, including during a November 2013 joint mission to Ethiopia with the World Association of Newspapers and News Publishers (WAN-IFRA). The Ethiopian government on that occasion denied IPI and WAN-IFRA’s requests to visit Nega and other jailed journalists.

The following year, WAN-IFRA honoured Nega with its Golden Pen of Freedom Award. In 2012, he also received the PEN American Center/Barbara Goldsmith Freedom to Write Award.

In early September 2011, commenting on the arrests of Taye and Alemu, and just days before his own detention, Nega wrote to IPI: “Their arrest has more to do with calculated cultivation of fear. Fear is what dictatorships ultimately rely on to survive.”

The annual Free Media Pioneer Award was established by IPI in 1996 to recognise news or media organisations that have made innovations that have promoted news access or quality, or benefitted journalists and the media community, thereby ensuring freer and more independent media in their country or region. 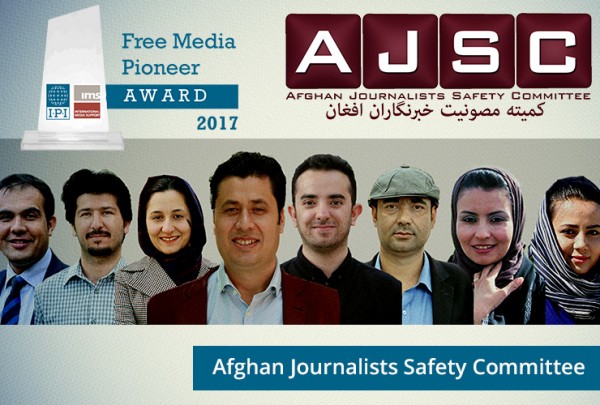 Founded in 2009, AJSC made significant achievements in fostering support and solidarity to journalists and Afghanistan’s media community in the face of extreme repression, violence and tragedy.

The stakes around its work are high: when the Taliban took over Kunduz province in 2015 and again in 2016, AJSC helped more than 160 journalists with emergency evacuation, shelter, health and psychological counselling. Over the past eight years, AJSC has assisted in more than 400 cases of violence and intimidation targeting journalists, and it has provided training to more than 600 journalists across Afghanistan.

AJSC maintains a 24/7 hotline as well as safe houses across Afghanistan. It provides training on both journalistic skills and safety – including risk assessment and management, first aid and conflict sensitive reporting, social media and digital security – and offers traumatised journalists support from a team of trauma counsellors. In keeping with its collaborative nature, AJSC also works to train police and security forces to encourage cooperation on safety.

For journalists who must flee the country or who require medical treatment not available in Afghanistan, AJSC maintains a relocation option in India, which offers long-term exiles job training or study at a local university or media house.

“Amid the severe threat to journalists in Afghanistan, the incredibly courageous work of the Afghan Journalists Safety Committee embodies the belief that journalism can and must thrive even in the most hostile corners of the world,” Trionfi said. “Their defiance and determination are helping to ensure that the people of Afghanistan can realise their right to inform and be informed, and their activities offer hope and a model to other societies wracked by conflict.”

Jesper Højberg, director of International Media Support (IMS), added; “ASJC has come a very long way and I am confident that their achievements are based not only on hard work but also rooted in the fact that it is a truly Afghan-based safety mechanism – not a donor-driven safety project. ASJC works hard to bring together media, local government, law enforcement as well as civil society to protect journalists and enhance media safety. Their inclusive and collaborative work makes ASJC a model for media safety work globally.”

Notably, AJSC also fulfils a research and advocacy function, recording attacks on journalists and promoting the role of female journalists and increased safety. According to AJSC’s statistics, 2016 was the deadliest year for journalists in the history of Afghanistan, with 101 recorded cases of killings, assault, intimidation and other forms of harm.

Najib Sharifi, director of AJSC, told IPI in response to news of AJSC’s recognition as the 2017 Free Media Pioneer: “My colleagues and I are delighted to hear about this. Such a prestigious award increases our passion, commitment and pride to our work towards protection of journalists, which is critical to preserving freedom of media and freedom of expression in Afghanistan.”

IPI’s 2017 World Congress will be held from May 18 to 20 in Hamburg, Germany. To register and view the full programme, please visit the World Congress site.